There were five different photographers amongst the Lee sisters Cartes de Vista taken in Durham and Yorkshire. Can you help identify anyone?

Click on a name to shoot downwards and find out more about the photographer, see the portraits they took and read my thoughts on dates and who they may be (work in progress).

Richard James BACON was born in Buckingham, Buckinghamshire in 1854 and was one of five children born to James BACON, a Wine Merchant, and Mary SUMMERFIELD (their first baby died). The family moved from Buckingham to Birmingham during the 1860’s and by 1871 Richard (age 17) was already working as a photographer. He married Mary Jane LEWIS in 1872 and gave his age as 21, but he was actually 18. Their first four children were born in Bishop Auckland, Durham (1873-1878) then they moved to Newcastle Upon Tyne, Northumberland where they had a further five children (1881-1889).

Bacon & Johnson were listed as photographers at South Road, Bishop Auckland in 1879 and 1884, although Richard was no longer living there by 1881. In 1881, there was a Robert JOHNSON, photographer, living in Bishop Auckland (sadly no addresses were taken), but I’m pretty sure this is Richard’s partner.

Robert JOHNSON was born 1854 in Bishop Auckland, Durham and was one of two children born to William Johnson, a grocer and Sarah WEALANDS (or Weelands). Robert married Margaret Jane BOAG in 1874 and they had seven children between 1876-1885. Both Robert and Margaret disappear from census records after 1881 (when he was working as a photographer). In 1891 all their children are living with their aunt Isabel BOAG, and many of them are still there in 1901. I’ve not identified death records for either of them, but seems the most likely thing to have happened.

The card design and square corners date the photograph to mid to late 1870’s and I believe the photo to be of the Lee sister’s uncle James BUNGAY (their mother’s brother). 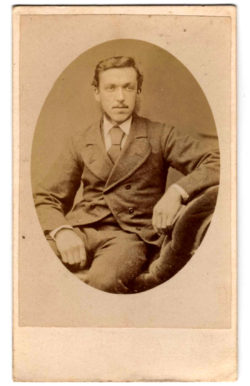 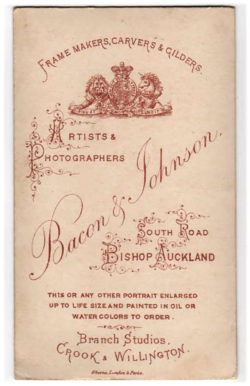 Allan RAMSDEN was born in Church Auston, Yorkshire and was the first of seven children born to Jospeh RAMSDEN, a quarreyman, and Jane NEWTON. In 1861, Allen was working as a quarreyman and local preacher in Barnard Castle, Durham. He married Margaret WALKER shortly after the census was taken and had five children born in Barnard Castle between 1861-1870. By 1871 the family had moved to Hunwick, Durham where Allan was now working as a photographer. In 1881 they had two more children (making seven in total) and were living in Barrow-In-Furness, Lancashire, and by 1891 they had moved to Pasture Drift House in Consett, Durham. Allan’s profession was noted as “Photographer & Phrenologist”. They moved to 30 Park Road, Consett by 1894 and were at 28 Park Road, Consett between 1896-1898. By 1901 they had moved again to Lanchester, Durham where Allan died in 1928 aged 87.

Bamboo back designs were popular in the late 1880’s. 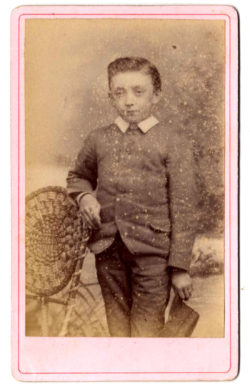 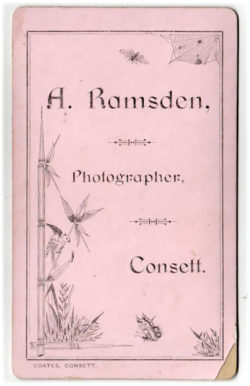 Elijah YEOMAN was born 1849 in Arkleside, Carlton Highdale, Yorkshire. He was one of six children born to John YEOMAN, a farmer, and Mary WILSON. In 1871, Elijah was living with his brother Wilson and following in his trade of butcher, but by 1881 was living in Barnard Castle, Durham and working as a photographer. The J T Bainbridge mentioned on the card back was Joseph Thompson BAINBRIDGE, who died in 1882 (he was living on Galgate Street in 1871 and had moved to Bramhall, Cheshire by 1881). Elijah married Honor Varder in 1880 in Devon (where she was from), and they had four children (all born in Barnard Castle). No street address is given on the photograph, but in 1881 the family were living on Marshall Street and Elijah had taken over Bainbridge’s photography studio. By 1885 they had moved streets to 13 Galgate, and by 1911 to Sockbridge, Westmorland. Honor died in 1923 aged 78, and Elijah in 1930 aged 80.

The card design and square corners date the photograph to mid to late 1870’s. 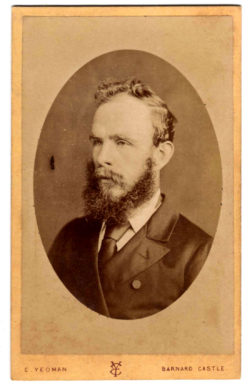 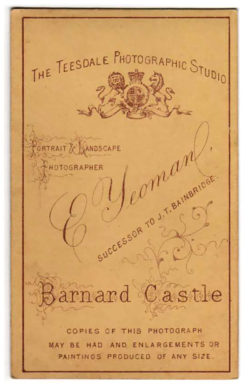 Joseph RAINE was born 19th April 1840 in Reeth, Yorkshire and was the first of two children born to John RAINE and Hannah CROFT, nee LONSDALE. Joseph followed in his father’s profession of carpentry into his twenties, but had changed to photography by 1871. He married Elizabeth DAVISON in 1865 and the couple were living at Back Flags, Richmond in 1871 with a fifteen year old servant. His now widowed mother and 26 year old sister Mary were also living with them (who was working as a photographic painter – she was also recorded in the 1871 census within a second household as a visitor and occupation “photographer”). By 1881 the couple had moved to Back Flags (near Richmond). Joseph’s mother was still living with them, but his sister Mary had married and died. Also in the household were two servants, one for the household and one as his assistant (sisters Alice and Elizabeth HILLERY, ages 20 and 16). Joseph and Elizabeth didn’t have any children, and Joseph died in 1902 aged 62, and Elizabeth in 1915 aged 76. He was obviously a very successful man, as his probate record shows he left over £1 million in today’s money (£9083 12s 6d).

The card back design looks early 1870’s, which fits with the address. 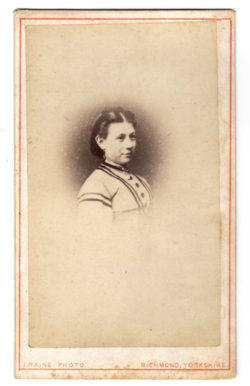 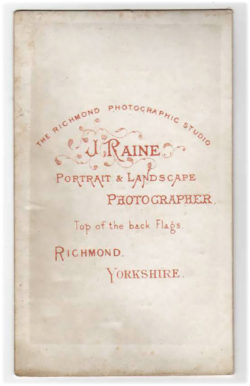 Walton & Bridges was a family chemists, run by George Robert WALTON (a pharmaceutical chemist) and his wife Francis Carson BRIDGES (aka Fanny). George was born in 1819 in Richmond, Yorkshire and Fanny in 1825 in Lynn Regis, Norfolk. George and Fanny married in 1848 and had four children between 1849-1863. They lived at Market Place, Richmond nearly all their married lives, along with three of their four children who helped run the business (Edward, Fanny and Emily, none of whom married and remained in the family home). George died in 1893 aged 74 and Edward took over the business until he died in 1925 aged 76. Fanny died in 1906 aged 80 and daughter Fanny died in 1934 aged 83. Their other daughter Emily was living with her nephew Frederick in 1939 (also a chemist) and she died in 1941 aged 77. The only child to marry was Frederick, who ran his own chemist shop in Darlington, Durham. He died in 1947 aged 86. There is no mention of photography at any time, so was obviously just an extra for the shop.

A dated photograph with the same back is from 1867, but the pose is too casual and more 1870’s. The shop probably used the same stamp for several years as it was not an official photography studio. This is a photo of the Lee sisters’s great uncle William BUNGAY (their maternal grandfather’s brother). 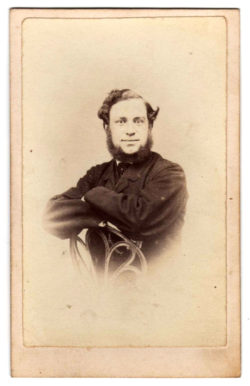 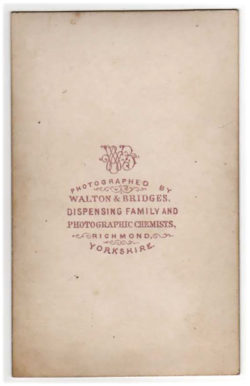