AncestryDNA have just updated their genetic origins, and a few things have changes, most notably the division of Ireland, Scotland and Wales into their own groups. England is still lumped in with Northwest Europe, where my percentage has dropped from 77% to 56% with the loss going into Scotland alone (no more Ireland). Norway has dropped slightly (9% to 4%), Baltics and France have disappeared, and I’ve got my Germanic Europe link back (which I lost last year). My Community links have not expanded. 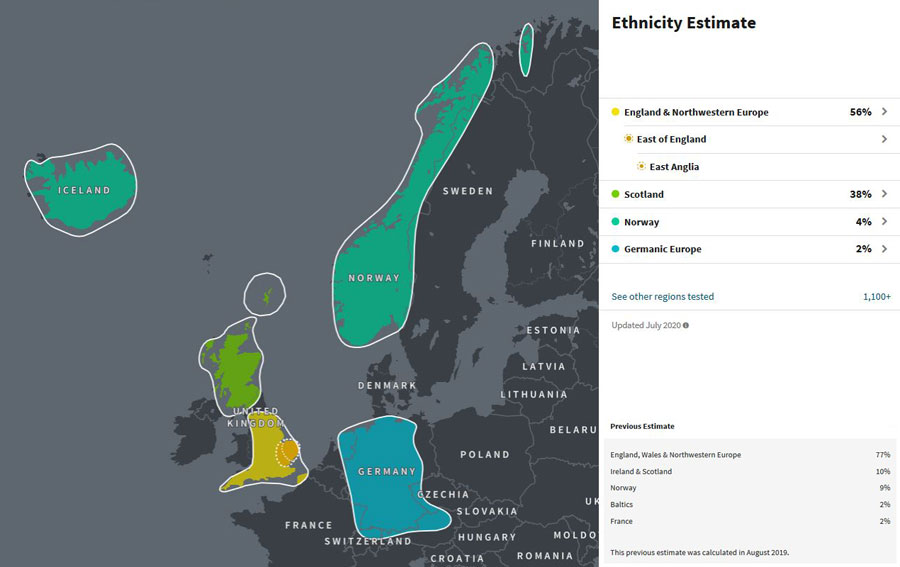 My mums previous 95% England & Northwest Europe has dropped again to 85%, with the loss going to Scotland (now 11%, didn’t see that one coming!), and Germanic Europe down 1 to 4%. Her community links are still the same (Greater London, East of England, Central Southern England).

My brother has lost quite a bit from his previous 91% for England, Wales and Northwest Europe, now standing at 66%. Scotland and Ireland are now two separate results (combined before they were 6%), and he now had 19% Scotland and 7% Ireland. Germanic Europe has risen from 3% to 5%, and Wales now also has a place of its own with 3%.

All in all, no great changes anywhere, just a shuffling around. It’s good to see England, Ireland, Scotland and Wales now have their own categories, and will be interesting to see how long it takes for more pin-pointed localities to start taking shape.