The St James The Less church WWI plaque lists H H Claverley as having died in 1915, and the memorial plaque names him as Harold H Claverley.

Harold Henry Calverley was born in 1896 in Hadleigh, Essex. He was the seventh of nine children born to Henry CALVERLY, a Zinc Worker (own account), born in Whitechapel, Middlesex, and his second wife Emma Alice STEWART who was born in Stepney, Middlesex. Henry and Emma married in 1886. Their first five children were born in Bromley, Middlesex, and the last four in Hadleigh, Essex. They lost two of their daughters in infancy.

When Henry and Emma married in mid 1886 he was only a few months widowed. He married his first wife, Matilda Martha PEPLOE, in 1872 in Mile End, Middlesex and they had five children together before her death in early 1886 (and they lost one of their sons age 3 in 1884).

In 1891, Henry’s two sons from his first marriage were living with their grandmother (Sarah Calverley), whilst his two daughters were living with him and his new wife and their three children at 36 Cantrell Road, Bromley by Bow, Middlesex. They had two more children in Bromley (one of which died), then around 1894 the family moved to Hadleigh, Essex. By 1901 they had five more children (but lost another child in infancy) and were living at Tudor Lodge, Church Road, Haldeigh. Henry’s eldest daughter from his first marriage was living on her own in their former property at 36 Cantrell Road. In 1911, Henry, son Harold (aged 14 and working as a shop boy) and daughter Elsie (age 18) were living back at 36 Cantrell Road (work related?), whilst his wife and four of their five other children remained in Hadleigh (their eldest daughter had now married). Henry died at age 63 on 5th Nov 1912, at 36 Cantrell Road. His probate record lists Tudor Lodge, The Crescent, Hadleigh as his second address.

Shortly after war broke out, Harold enlisted as a Private into the Royal Fusiliers (London Regiment) 12th Battalion in Southend, Essex. He disembarked for France on 1st Sep 1915 and just 28 days later, on 28th Sep 1915, he was listed as missing in action and later presumed to have been killed on this date during the Battle of Loos. He was 19 years old. Harold was posthumously awarded the Victory Medal, British War Medal and 1915 Star.

Just over two months after Harold’s death, his older brother Stewart enlisted in the Machine Gun Corps. Just recently married and working as a Tinsmith in East Ham at the time. Stewart survived the war, and was discharged due to sickness on 14th July 1919 as an Acting Corporal. His records show he was in France from 6th May 1917 to 26th April 1918. He was wounded by gas on 22nd April 1918, hospitalised and then sent home on 27th April 1918 where he served the rest of his time until being discharged.
I’ve not found any military records for their brother Horace, who would have turned 18 in Apr 1918, nor Thomas who would have been 19 when war broke out.
Their two older half brothers (Henry and Ernest) were 39 and 37 when war broke out. Henry had three sons of a similar age to his younger half brothers and at least two of them enlisted. Sidney Philip Calverley was a Private in the City of London Yeomanry (Rough Riders) Corps of Hussars, and Valentine Henry Calverley a Rifleman in the 16th (County of London) Battalion (Queens Westminster Rifles) London Regiment. Sidney survived the war, but Valentine was killed in action on 8th Dec 1917 in Syria (age 23).

Harold’s mother Emma died in Hadleigh in 1946 aged 87. She had been living at Mar Gwyn, St Marks Road.

Photo of Emma thanks to her great grandson Allen Redfearn. 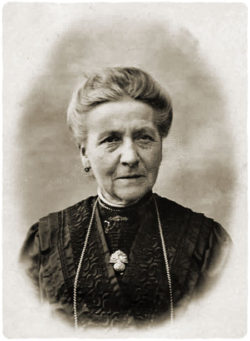 What of Harold’s half brothers and sisters?

Henry George was 23 years Harold’s senior and had been married two years by the time he was born. Henry married Esther Jane WEST in 1894 and they had three sons, one of which was killed in action during WWI (see above). He worked as a Contractor for Zinc Roofing & Sheet Metal Workers and lived in the family home of 36 Cantrell Road, Bromley, Middlesex until his death in 1949 aged 74.

Ernest Walter was 22 years Harold’s senior and got married in 1902 to Mary DAWE, when his half brother was six. They had one daughter in 1903, then thirteen years later they had a second daughter. Their first daughter died in 1928 when she was 25, and their second married in 1940 but I loose her trail after that. Ernest was a Zinc & Metal Worker and died in 1950 aged 75. He lived at 80 Fairfoot Road, Bromley which was just around the corner from the family home on Cantrell Road and the same road his grandmother lived on.

Adelaide Sarah was 18 years Harold’s senior and married Ernest Henry SPINK when Harold was 11 (she was 28) in 1907. Ernest was a Storehouse Assistant for a Naval Yard, and they had three children. Frederick died in 1951 aged 71 and Adelaide in 1968 aged 90.

Julia Matilda Maria was 13 years Harold’s senior and married Jesse Nehemiah GRINYER in 1900 when Harold was age 4. Jesse was a Compositor and they had three daughters. He enlisted in the London Regement (London Scottish) 14th Battalion in 1915 and served in Salonica from Dec 1916 to Aug 1917 (where he suffered from trench fever), then Egypt until July 1918, then France where he received a gun shot wound to his shoulder 20th Aug 1918. He then served the rest of his time in England and was discharged 23rd Feb 1919. Julia died in 1943 aged 59 and Jesse in 1950 aged 70.

What of Harold’s full brothers and sisters?

Violet Bertha married Frederick James Lye WILLIAMS in 1907 and they had five children. In 1939 they were living in Southend-On-Sea, Essex and Frederick was working as a Corporate Transport Inspector. Violet died in 1952 aged 65 and Frederick in 1968 aged 84.

Constance Alice was living at home in Hadleigh in 1911 age 22. She left for Australia two years later on 12th Sep 1913 as a 3rd class passenger and married Frederick William REDFEARN two months later on 22nd Dec 1913 in Perth. Did they already know each other somehow, or was it a whirlwind romance? I’ve not found a record of when Frederick left England for Australia, but must have been between Apr 1911 to Dec 1913 as he still was living in Surrey when the 1911 census was taken, working as a Commercial Clerk.  They had at least one child (possibly four). Frederick died in 1947 aged 59 and Constance in 1964 aged 75.

Photo of Constance thanks to her grandson Allen Redfearn. 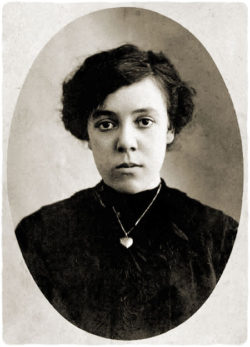 Stewart John married Lilian SHEPHERD in 1915 and they had two children. Their first child was born in 1921 after Stewart returned from the war (see higher up for more info), and their second child in 1928. Stewart worked as a Tinsmith and died in 1968 aged 77. Lilian died three years later in 1971, also aged 77.

Florence Charlotte‘s birth and death were registered in the same quarter(Jan-Mar), so could have been a few days to three months old when she died in 1892.

Elsie Mary married Cecil TUCKER in 1916 at St James The Less Church in Hadleigh, shortly before he was sent to France as a Private in the 2nd Essex Regiment. He served with the 2nd Reg between 28th Sep to 12th Oct 1916, then the 11th Royal Fusiliers between 13th Oct 1916 to 30th May 1917, and lastly the 17th Royal Fusiliers from 23rd Oct to 28th Nov 1917 when he was killed in action at the Battle of Cambrai. Cecil was born in Kent, but by 1911 his family were living in Hadleigh and as such his name is also commemorated on the Hadleigh War Memorial along with his brother-in-law Harold and another brother of Cecil’s who became missing in action on 27th Jan 1917 (Frederick John Tucker).
Elsie remarried in 1921 to Robert George Howell CONNER. Robert was a Scientific Laboratory Apparatus Worker and they had three children. Robert died in 1952 aged 57 and Elsie in 1957 aged 64.

Thomas Stanley was living with his mother in South Benfleet, Essex 1939 (unmarried) and they were both stated to be “incapacitated”. He died two years later in 1941 aged 47.

Horace Edward married Elizabeth Ellen COXALL in 1934 and they had one child. In 1939, Horace was working as a Fitters Mate (Electrical) and living on the same road as his mother and brother, Thomas. Horace died in 1971 aged 70 and Elizabeth in 1992 aged 93.

Harold came from a long line of metal worked on his direct paternal line. His father Henry John CALVERLEY was a Zinc Worker, his grandfather Henry CALVERLEY a Brass Founder, and his great grandfather was a Coppersmith and Tinman.

His father Henry John CALVERLEY was the first of six children born to Henry CALVERLEY and Sarah PLESTED, who was Henry’s third wife. Henry’s first marriage was to the widow Ann HULBERT (nee unknown) in 1824, for which I have found one child but were most likely more. Ann died in 1842 at age 45. Henry married for the second time to the widow Eliza TANKINS and had two children before she died (between 1846-49). Henry then married his third and final wife, Sarah PLESTED, in 1849, who was about 16 years Henry’s junior.

Harold’s mother, Emma Alice STEWART, was the third of five children born in Limehouse to Thomas STEWART and Charlotte BLEE. Thomas was a Carpenter as was his father before him, and he was from a very large family, being the second of fourteen children born to William STEWART and Elizabeth Sarah DARK. Harold’s grandmother Charlotte BLEE was the fifth of five children born in Kingston Upon Thames, Surrey to parents Lovell BLEE and Hannah WOODS. Her parents died within a few days of each other in 1828 when she was 10 years old. Charlotte was age 35 when she married Thomas, and she died in 1868 when Harold’s mother Emma was also age 10. Thomas never remarried. 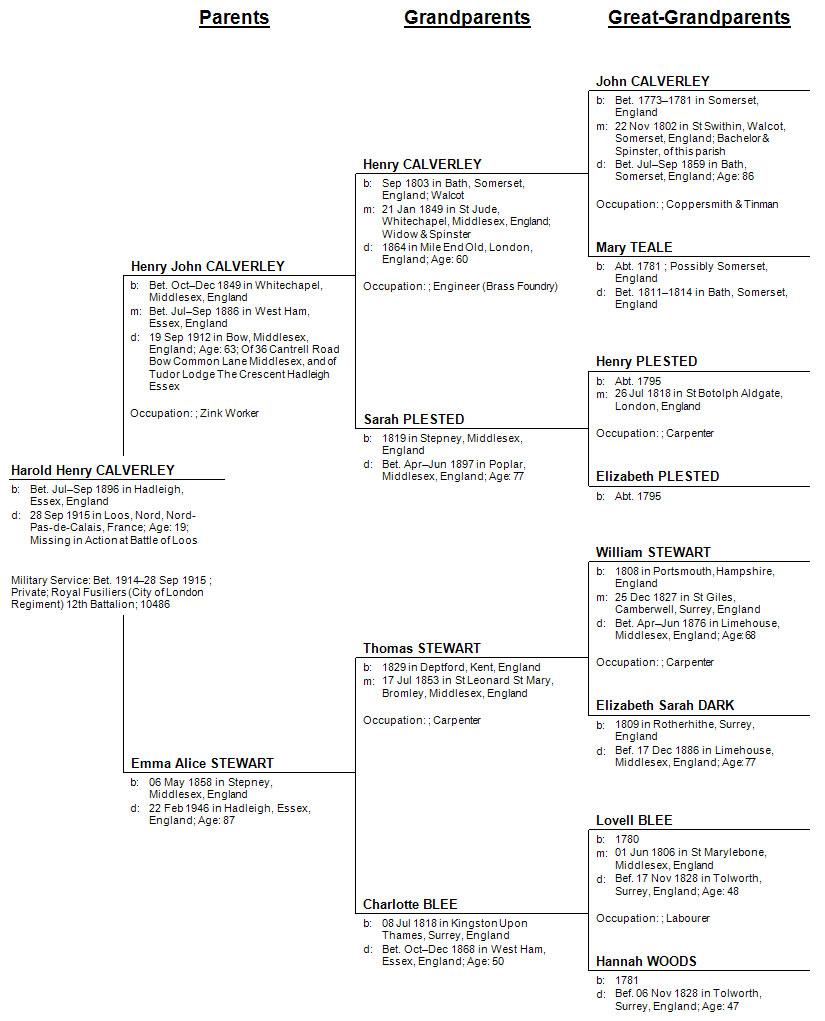 Harold was born and lived in Hadleigh, so is easy to understand why he’s on the Hadleigh War Memorial.