The St James The Less church WWI plaque lists J H Compton as having died in 1915, and the memorial plaque names him as Jack H Compton.

John Hugh COMPTON (aka Jack) was born 1st Aug 1897 in Walthamstow, Essex and was the first of eight children born to Hugh COMPTON and Flora MOORE. His father was a General Labourer from Walthamstow, and his mother was originally from Wolverhampton, Staffordshire.

Hugh and Flora married in 1894 in Islington, Middlesex. I don’t know where Hugh was living previously as I haven’t been able to trace him in any census records prior to 1901, but Flora’s family moved to Islington from Staffordshire between 1881-91. Shortly after marrying, Hugh and Flora moved to Walthamstow and had six children between 1897-1911, but lost their third child (Flora) in infancy in 1903. By the time war broke out, the family had moved to Essex where their oldest child Jack enlisted as a Private into the East Surrey Regimen during Sep 1914 (underage at just 17). It looks like the family lived at 2 Sydney Terrace, Meadow Road, Hadleigh briefly before moving to Southchurch (Central Avenue in 1915, Seaview Road in 1916 and Royson Avenue in 1919). Jack was sent to France on 24th Mar 1915 and was killed in action just one month later on 25th April. He was posthumously awarded the 1915 Star, British War Medal and Victory Medal.

The following year, Hugh and Flora had their seventh child who sadly died in infancy (also named Flora, like the baby they lost in 1903), and their eighth and final child was born a few months before the war ended.

As for Jack’s siblings, Arthur married Emily Florence RICKETT in 1928 and had three children. The 1939 register records his occupation as “Coach Painter & Lavatory Attendant”. He died in 1979 age 78. Flora (1) died as a baby in 1903. Thirza married Thomas Spencer BENNETT, a Coach Painter, in 1927. They don’t appear to have had any children, and she died in 1992 aged 86. Edmund married Elsie Olive STANWAY in 1928 and had three children before his untimely death in 1935 age just 27. Kate married grocer Charles Fredrick MITCHELL in 1939 and had two children. She died in 2000 aged 88. Flora (2) died as a baby in 1916. Mary married Eric Leslie D KURUBER in 1939, either just before or just after WWII began. They had three children and Mary died in 2009 aged 91.

Jack’s father Hugh COMPTON was born 3rd July 1875 in Walthamstow, Essex and was the third of four children born to John COMPTON and Jesse SEATON (whose father was a Tailor & Woolen Draper). John worked as a Commercial Clerk (his father was an Inn Keeper), and census records show he was deaf since the age of 15. He married Jesse 15th May 1869 in Camden Town, Middlesex and was a widower at the time. Their first child was born in Harrow, the second and third in Walthamstow, and their last in Hackney. Sadly their last child died as a baby in 1878, followed a few months later by Jesse aged 39 in Jan 1879. I haven’t found John or his children in the 1881 census, but by 1891 John was living back in Walthamstow and in 1901 was in the same house as his son Hugh (in a separate dwelling). John had moved to Southchurch by 1911, which perhaps prompted his son to move there too shortly after. He died in 1919 aged 82.

Jack’s mother Flora MOORE was born 6th Feb 1877 in Wolverhampton, Staffordshire and was the seventh of eight known children born to William MOORE and Anne EVANS. William was a Keymaker Locksmith by trade (his father was a Minor), and married Anne on 24th June 1861 in Wednesfield, Staffordshire (her father was also a Keymaker). Their first three children were born in Wolverhampton, the next three in Birmingham, Flora back in Wolverhampton and the last in Short Heath, Staffordshire. By 1891 the family had moved to Islington, Middlesex (where Flora married Hugh), and were in Walthamstow, Essex by 1901. The 1911 census states Anne had given birth to 10 children, 8 of which were still alive (I’ve only been able to confirm 8, which may or may not be the same 8 which were still alive in 1911). I haven’t been able to confirm when William and Anne died. 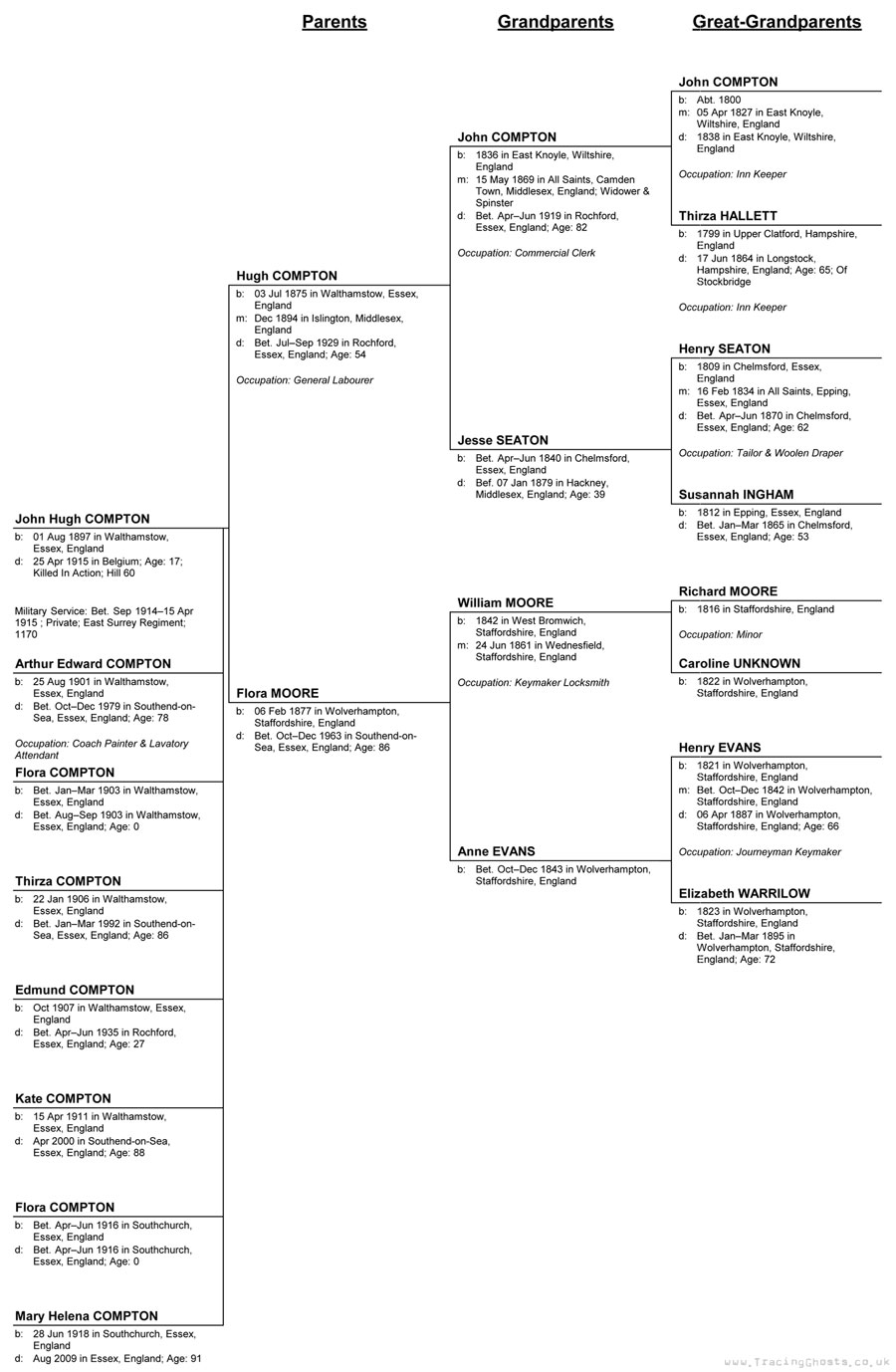 Jack’s family lived at 2 Sydney Terrace, Meadow Road, Hadleigh at some point between 1911-1915.