The St James The Less church WWI plaque lists S C Allen as having died in 1918, and J E Allen in 1919. The memorial plaque names them as Sidney C Allen and James E Allen. Sidney and James were brothers.

There is headstone is a dedicated to the Sidney and James in St James The Less churchyard, which gives some more information (including parents and another brother): 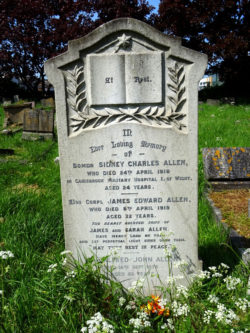 Sidney and James Allen were from a family of seven children, all boys. Their parents were James Edward ALLEN, a Bricklayer born in Gosfield, Essex, and Sarah Allen nee GREEN of Hadleigh (where all their children were born).

In 1911, James and Sidney (age 14 and 17) were living at home with their parents and four other siblings at Myrtle Villa, Lynton Road, Hadleigh, Essex (as they were in 1901).  Like their father, all the brothers worked as Bricklayers. Their father James died in 1928, and their mother the following year in 1929. They were both aged 66.

James‘s first theatre of war was in France on 30th May 1915. He was discharged 17th Sep 1918 as “no longer physically fit for war service” (four weeks before peace was declared) and was the last soldier to die from Hadleigh at almost five months to the day from the war ending, presumably from injuries sustained whilst in service (age 22). He was unmarried.

What of their brothers?

The eldest brother, Ernest, enlisted in 1906 into the Royal Garrison Artillery. He married Emily Hammerton in 1909 and became father to twins later that same year. He was sent to France on 16th Aug 1914, where he served until being admitted into hospital with a fractured and dislocated ankle, and returned home to a British hospital on the 21st. Ernest then served at home until 5th Jan 1918 when he was sent to Egypt, but only seems to have been there until Feb. His wife gave birth to their third child the March of 1918, and Ernest was demobilised on 20th Apr 1919 with the rank of Battery Sergeant Major. He worked as a bricklayer after this time and died in 1953 age 65.

Alfred never married, and I’ve not found any military records. He worked as a bricklayer and died in 1974 age 85.

Bertie married in 1919 at age 27 to a 43 year old widow called Matilda Franklin (Thorington). They didn’t have any children of their own, but Matilda had three from her first marriage. Matilda died in 1943 age 67, and Bertie remarried three years later to Amy Wallis Greenfield Worrell Wordly, formally Barrett and nee Taskere (she’d been married twice before)! They were married nine years before her death in 1955, and Bertie himself died in 1966 age 66.

Percy married Agnes Miriam Howard in 1922 and they had three children. He worked as a bricklayer and died in 1983 age 84.

The youngest brother, Archibald (he didn’t use his first name Myrtle, unsurprisingly!), enlisted into the Royal Marine Light Infantry: Chatham Division in Dec 1918 at age 17. He married Annie Louise Evans in 1923 and they had three children before Annie’s sad death in 1930 at age 27. They named their son Sydney James, presumably in honour of Archibald’s two brothers. Archibald remarried the following year to Beatrice Florence Byford and had three more children. He worked as a bricklayer and died in 1966 age 64.

Sidney and James’s father James Edward Allen was one of six children born between 1853 and 1864 to William ALLEN and Jane Ann JARMAN. William was Wharf Foreman and Agricultural Labourer.

Sidney and James’s mother Sarah Green was the twelfth of thirteen children, all born in Hadleigh between 1840 and 1864 to parents William GREEN (an Agricultural Labourer) and Anne HAINESWORTH. Their first child survived, but the next four died in infancy. They had two more, then lost another child, followed by five more who all survived.

Sidney and James’s paternal grandfather William Allen was one of ten children, all born in Pebmarsh, Essex, to parents John ALLEN and Ann JARMAN. John was a Corn Dealer. Their paternal grandmother Jane Ann Jarman is the only child found of parents Joseph JARMAN and Jane SMITH. Joseph was a Farmer and Land Agent. It’s more than likely that their paternal grandparents were cousins of some degree via the Jarman side.

Sidney and James’s maternal grandfather William Green was one of five children born in Hadleigh to patents William GREEN and Mary Ann ROGERS. I don’t know anything about them. I’ve not been able to trace their maternal grandmothers (Anne Hainesworth) line back further than the name of her father, James HAINESWORTH, although there is a possible family from Rayleigh she could fit into. 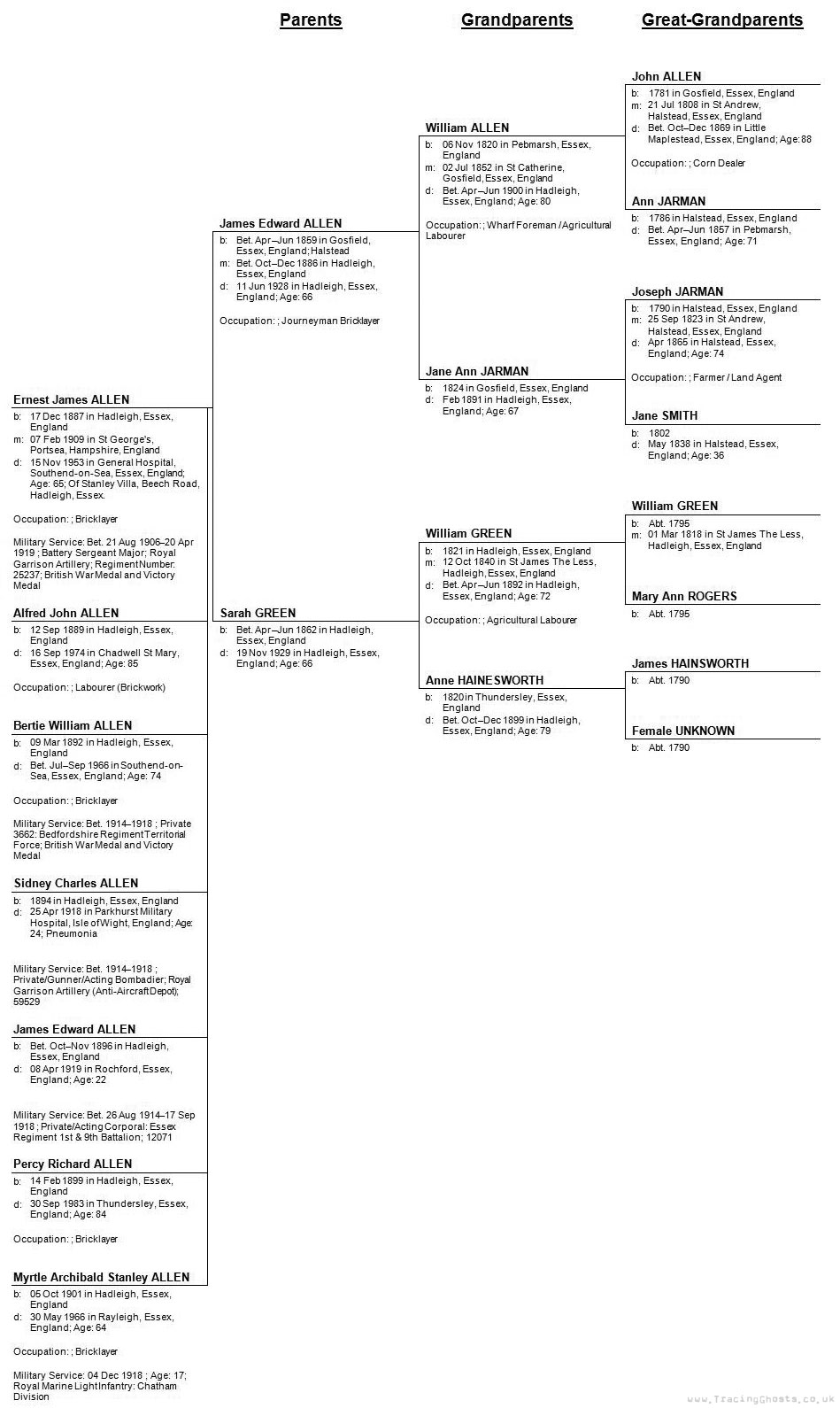