A post for help on an Essex local history group peeked my interest this weekend, regarding a giant brass plate unearthed in a Benfleet garden.

“I own a cottage near the station in the small Benfleet Conservation Area. I bought it in 2008 and when clearing the garden I found this. I know it’s a long shot but does anyone know the names inscribed? It’s quite big 90cm diameter. It would be great to track down the families. Thank you.” 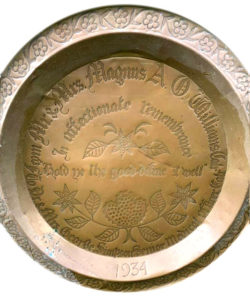 Original image thanks to David Stone

The large plate is inscribed with:

The tray has all the looks of a memorial item at first, and the quote is from “In Memoriam A.H.H., Canto 53” by Lord Tennyson:

How many a father have I seen,
A sober man, among his boys,
Whose youth was full of foolish noise,
Who wears his manhood hale and green:

And dare we to this fancy give,
That had the wild oat not been sown,
The soil, left barren, scarce had grown
The grain by which a man may live?

Or, if we held the doctrine sound
For life outliving heats of youth,
Yet who would preach it as a truth
To those that eddy round and round?

Hold thou the good: define it well:
For fear divine Philosophy
Should push beyond her mark, and be
Procuress to the Lords of Hell.

There is only one date (1934) and the plate was given “to” Mr & Mrs Simpson “from” Mr & Mrs Williams. Strange wording if one of them had died, and I felt perhaps the plate was to mark a different kind of departing.

Further information was added in the post’s comments as to the origins of the plate by the previous owner of the property it was found in (who were also the previous owners of the plate). It turns out to have been bought at Battlesbridge Antique Centre around 2004, and therefore had no connections to the cottage in Benfleet. The last owners of the property left it behind when they moved out in 2008.

After a LOT of digging, I discovered Magnus Archibald Olawunmi WILLIAMS full name. Magnus was vice president of the National Council of Nigeria and the Cameroons (NCNC), and one of its founding fathers. He seems to have been most active in the 1940’s, and represented Dr. Azikwe at the Pan-African Congress held in Manchester in 1945 just a few months after the end of the war where he was quoted as saying:

“The Colonial Office has always told us by words and implication that there is a happy land; and we have always answered “far, far away.” We have come to this Congress to decide and enforce the means by which we shall make that happy land our own. The Colonial Office is an instrument of oppression and we must do our best to abolish that office. When the war came, with its clash of interests between imperialists, the Nigerian Government vested the mineral wealth in the Crown, and the Government of Britain says that every mineral in the Nigerian ground must come to them. While the people of Nigeria are contributing to the revenue of the country, the sons and daughters of the rulers reap the benefits. We must do our best to right these wrongs.”

He may have been in the army beforehand and had died by 1968. One more snippet of information I found in the “Who’s Who in Nigeria” from 1956 included some detail of his other occupations (a subscription is needed to read any more):

I’ve found no mention of who his wife was.

In 1990, a 40 year old Nigerian by the name of Magnus Archibald Olawunmi WILLIAMS applied for US citizenship (granted in 1991). Could he be a relation?

George SIMPSON was born 29th Mar 1900 most likely in Scotland. His father, G SIMPSON, was a mining engineer from Fife and his mother Lizzie was from Dunfermline. I haven’t been able to identify the family in the 1901/1911 censuses as yet.

George studied medicine at Edinburgh University qualifying in 1924, and set up a practice at Elliot Hill, Dunfermline, Fife, Scotland shortly after. He is listed in the Medical Directory at this address between 1926-1930, and his mother was listed at the same address in 1910/1911.

George married Kathleen Mary Viva PEACKOCK on 30th Oct 1928 at Stoke Dry, Rutland, England. Kathleen was the daughter of Rev. Charles Alfred PEACOCK, an army chaplain, and Annie Kathleen RENDLE, the daughter of an army officer. The marriage was big news in the village Dry Stoke judging by the length of the newspaper article I found! George was now working for the Nigerian Medical Service, and his best man was Mr. Kenyon DEWAR of the Nigerian Political Service (born 30th Oct 1903 in Madras, India and killed in a railway accident at Sinai Peninsula, Egypt on 27th Mar 1942).

The article was originally printed as one long column, which I have split in two and re-organised to make it easier to read. The first part describes the wedding, outfits and guest, and the second half contains a lengthy list of all their presents. 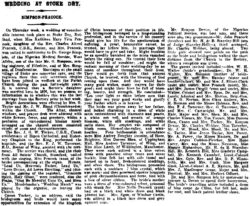 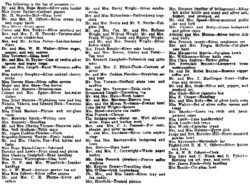 The Medial Directory for 1931-1937 lists George’s practice as located in Nigeria but sadly no town. On checking a list of Nigerian cities to see if the “Calr.” mentioned on the plate referenced a place I found a likely match with Calabar. Perhaps this was where he was based up to 1934?

George and Kathleen travelled back and forth between England and Nigeria several times in the 1930’s (always found separately). The “last country of permanent residence” required at least 12 months stay and interestingly, Nigeria is mentioned only once (the vicarage address in Stamford was that of Kathleen’s parents). The 1932/1933/1934 departures were all from Calabar, which fits nicely with the date on the plate. They no doubt travelled more times than I have found records for but this gives a good indication of their movements at this time.

George and Kathleen had three children together (two boys and a girl), although I have only identified two, both born in England.

In 1938 George’s medical practice was listed back in England at Margate in Kent (where his son was born the previous year). The family settled down in Margate, not moving away again. The 1939 Register records the Simpson household at the same address and included George, Kathleen, son Drummond and Kathleen’s mother Annie PEACOCK (her father was living in Hove, Sussex, now retired). I’ve not located their daughter at this time who would have been about 8 years old.

As well as running a medical practice, George was also the chairman of Margate magistrates until 1965 and Kathleen was the president of Margate Inner Wheel.

Kathleen died on 24th Jun 1973 aged 72, and George remarried rather swiftly on 26th Oct of the same year to divorcee Mrs. Kathleen Mary SHAW, former co-owner of the Thanet Restaurant and twenty two years his junior. The marriage didn’t last very long as George was taken ill two year later during a holiday with his new wife. He spent six weeks at St Guy’s Hospital in London where he died on 28th Oct 1975 age 75.

The commemorative plate was most likely passed down to one of George’s children at this point, but it’s journey from Margate to the Battlesbridge Antique Centre in 2004 will no doubt remain a mystery! 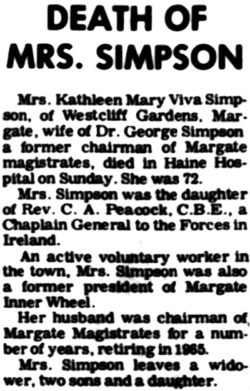 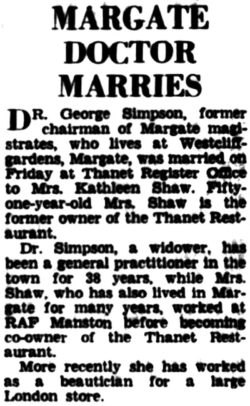 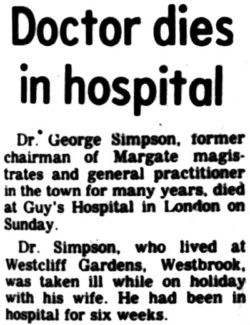