I found myself looking into who C SYMONDS was in a WWI photograph quite by accident, which had been posted on the Bristol and Avon Family History Society‘s Facebook page:

“Looks to be C Symonds of 15 Ridgeway Parade and he has sent to Miss Hobbs of 30 Snowdon Road – hope it’s useful perhaps to relatives.” [J. Bothwell]

It didn’t take long for me to confirm the young man in the photograph was Charles Clifford SYMONDS, and Miss HOBBS was his wife to be Ellen Maud HOBBS.

Charles Clement SYMONDS (aka Charlie) was born 27th Apr 1894 in Shipley, Yorkshire to parents Clement Clifford SYMONDS, a Cabinet Maker, and Emma BARTLETT, the daughter of a Painter & Plumber. I wondered what else I could find out, and discovered a family marked by several tragic events over the years. 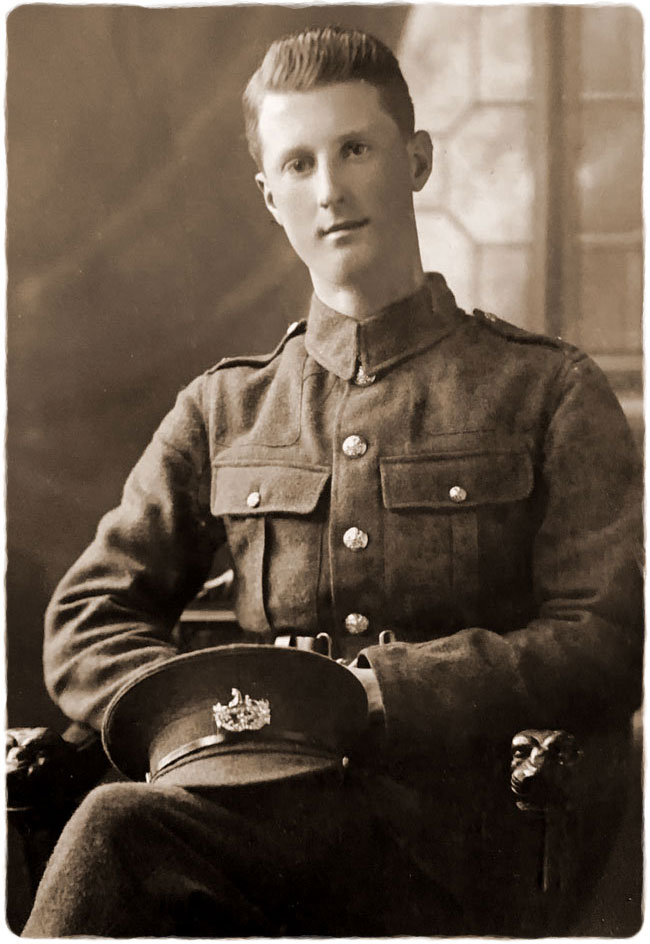 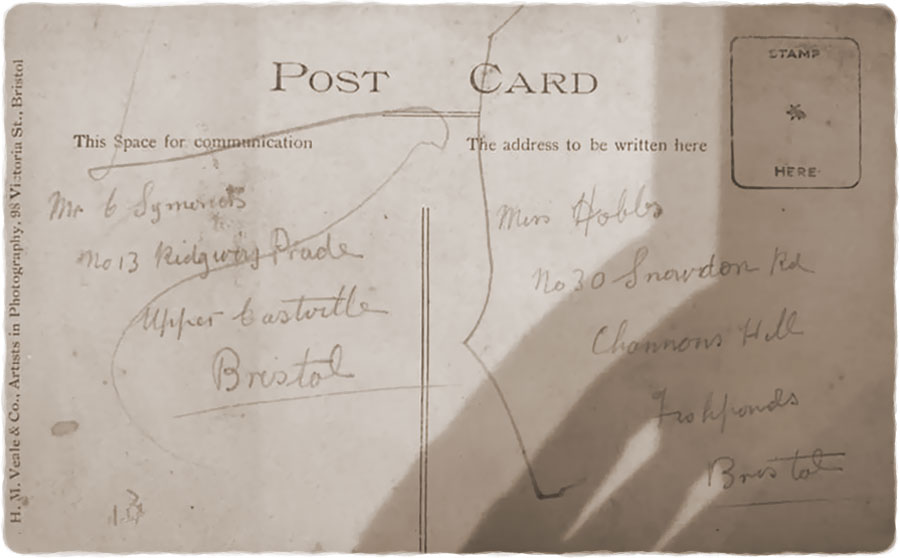 Postcard used with the kind permission of J. Bothwell.

Charlie’s father Clement Clifford SYMONDS was born early 1867 in Hambrook, Gloucestershire and was the fifth of six children born to father John Henry SYMONDS, a Wool Stapler from Ross-on-Wye, Herefordshire, and Selina Ann PROCTOR, the daughter of a Watchmaker from Worcester, Worcestershire (but grew up in Ross-on-Wye).

Charlie’s mother Emma Louise BARTLETT was born mid 1870 in Glastonbury, Somerset and was the second of eight children born to Charles BARTLETT, a Plumber & Painter, and Mary Ann COOKE, the daughter of a Sawyer.

In 1891, the year before marrying, Clement was boarding in Bristol, age 24 and already started his career as a Cabinet Maker, whilst Emma was working as a Domestic Servant for a Seed Seller nearby in Clifton, age 21. Somehow they ended up getting married in Birmingham towards the end of 1892. They had four sons in total, the first being Charles Clement SYMONDS, born 27th Apr 1894 in Shipley, Yorkshire. Their next three sons were all born in Bristol. I wonder what took them up to Birmingham, and then into Yorkshire? Charlie was baptised in Windhill (near Shipley), Yorkshire on 20th Jun 1894, and by 1895 the family had moved back to Bristol where their next son was born (Arthur Clifford) on 1st Dec 1895. They were living at 1 Kenilworth Place when Arthur was baptised later that month. Three years later in Jan 1898 they had another son, Thomas. The family were now living at 6 Waterloo Terrace.

Tragedy struck in Mar 1901 when 3 year old Thomas’s clothes caught fire whilst he was playing with a box of matches at home. The poor little boy was severely burned over his whole body and died shortly afterwards from shock. 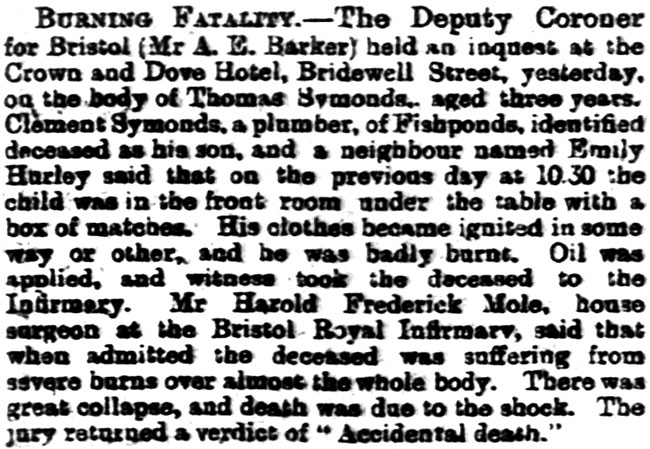 Emma was heavily pregnant when this happened, and gave birth to their forth son on 8th Apr (Clifford). They were now living at 32 Balaclava Road in Fishponds.

By 1911 the family had move to 2 Glencoe Terrace, 29 Ridgeway Road, Eastville/Fishponds. Clement was now age 44 at still working as a Cabinet Maker (as a “worker” rather than for his “own account“), and Emma was age 40 with “home duties” as her occupation. The 1911 census return also included a column for children born alive, still living, and died. Emma stated to have had five children born alive, two of which had since died. One of the deceased children was Thomas, but I haven’t been able to identify this fifth child at all. Charlie, Arthur and Clifford were now aged 17, 15 and 10. Charlie and his brother Arthur were working as Packers in the Soap Works, whilst youngest brother Clifford was still at school. Shortly after the census was taken Charlie’s mother Emma sadly died age 41.

War broke out on 28th Jul 1914, and Charlie enlisted eight weeks later (23rd Sep) in Bristol as Private #14410 in the Gloucestershire Regiment. The family were now living at 13 Ridgeway Parade, Upper Eastville and Charlie was working as a Tram Conductor. He served in France from 21st Nov 1915 to 14th May 1916, and was transferred to the 2/4th Royal Fusiliers in Chelmsford in Dec 1916. He transferred for a second time into the Military Police Corps in Aldershot in Apr 1917. Charlie was sent abroad again on 6th May 1917, but was given leave back to the UK in the Jul to get married (15-24). Charlie married Ellen Maud HOBBS (the daughter of a Stone Quarry Foreman) on 18th Jul 1917 at St Mary’s Church in Fishponds when he was age 23 and a Corporal in the Military Foot Police. He was briefly staying back with his father at 13 Ridgeway Parade, and Ellen was living at home at 30 Snowdon Road, Fishponds. Charlie returned to service abroad again on 25th Jul where he remained until 20th Jun 1919, and was finally demobilised 20th Jul 1919. When he returned home it was to his wife’s family home of 30 Snowdon Road. It’s possible his brother Arthur also joined the Gloucestershire Regiment.

Charlie’s brother Arthur married Emily Elizabeth HARRIS on 25th Apr 1920, and his brother Clifford married Beatrice May HODGES in the spring of 1923.

This is a map of the area just outside of Bristol where the Symonds and Hobbs families lived, published in 1921. The street in red is Ridgeway Parade, and the street in green in Snowdon Road. 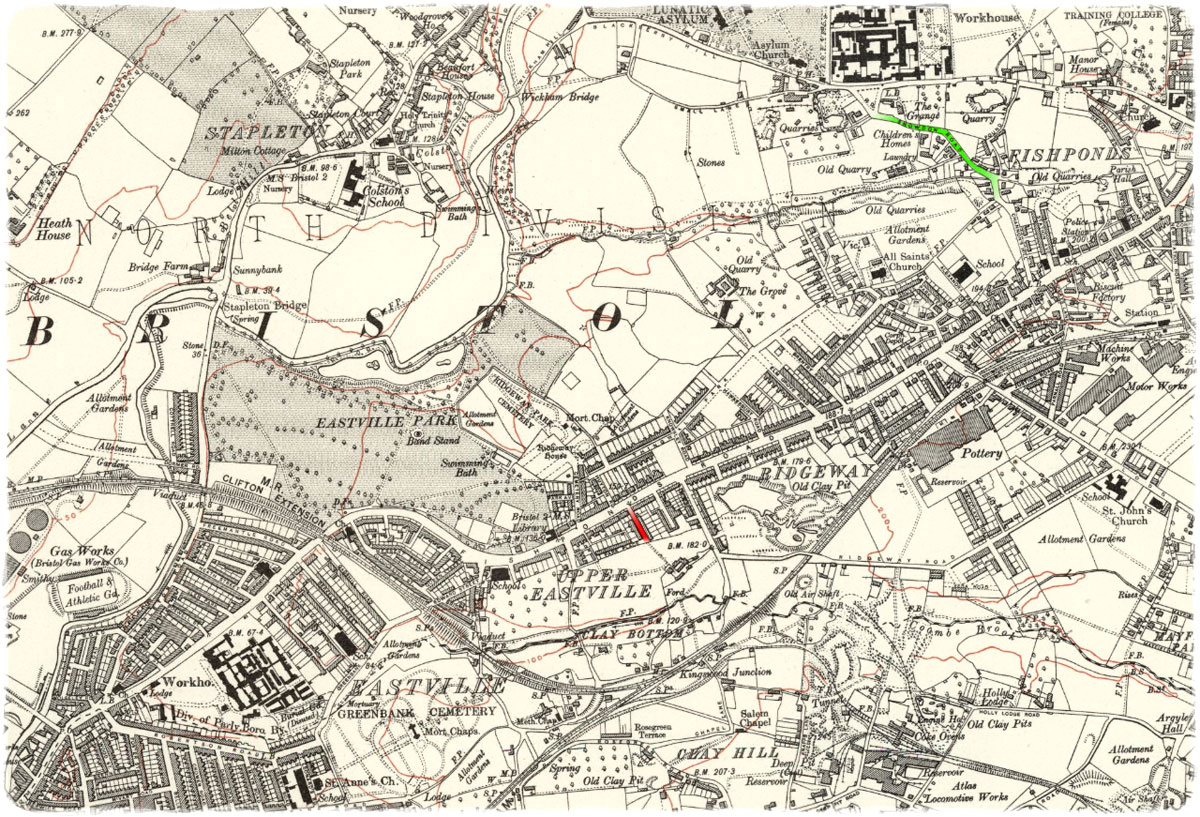 Map reproduced with the permission of the National Library of Scotland.

Charlie and Ellen’s first and only child was born eleven years after they married in Dec 1928 in Fishponds (Betty K SYMONDS). Arthur and Emily had their first child in 1921, then a large gap and a second child in 1937. Clifford and Beatrice had four children between 1923-1934, sadly losing a newborn in 1928.

Tragedy struck the Symonds family yet again in the April of 1931, when Charlie’s father Clement committed suicide by hanging himself from the banisters of his home. The inquest noted he had been suffering from depression. His body was discovered by a 14 year old boy who had been send around to collect the rent. 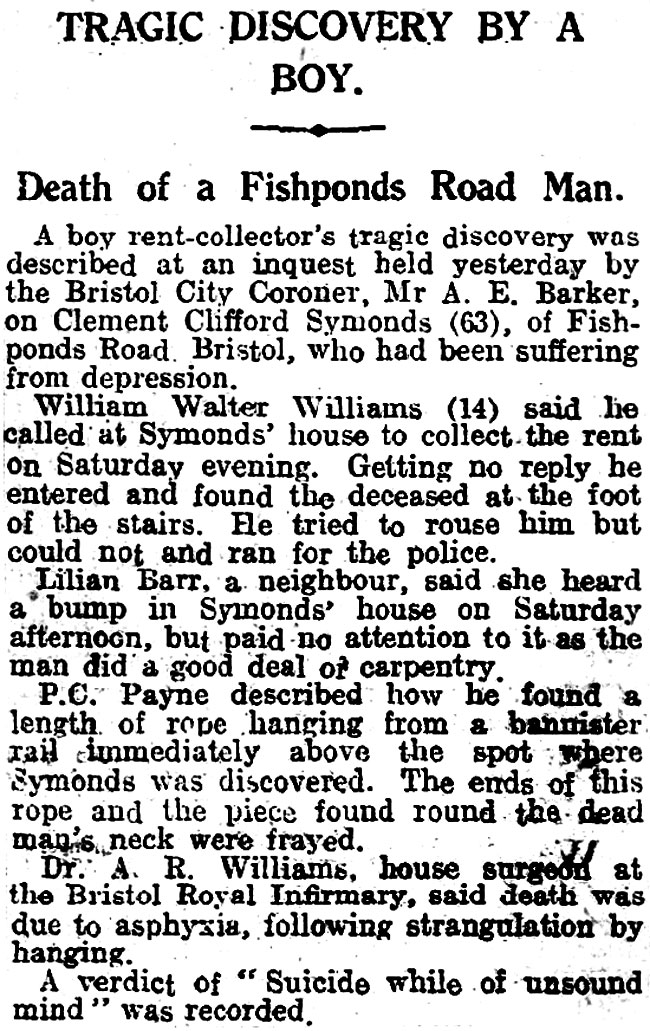 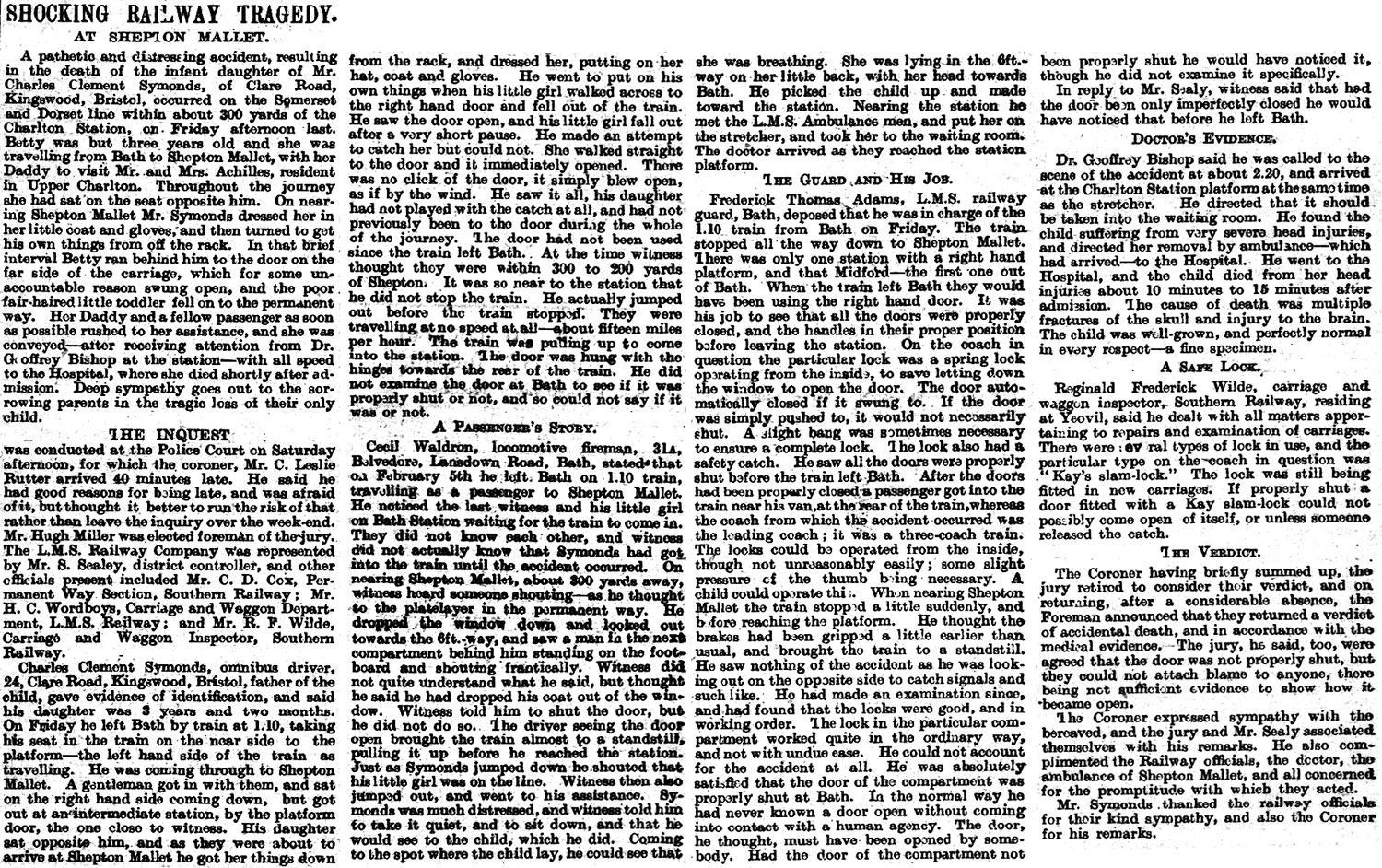 At the time of the accident, the family had been living at Clare Road in Kingswood near Bristol. By 1939, Charlie and Ellen had moved to 192 Forest Road, Fishponds and was still working as a Bus Driver.

No more records are to be found until Ellen dies in 1981 in the Bristol area age 86, followed by Charlie on 19th Jul 1983 at the Worthies Home For The Elderly in Stapleton, Bristol age 89.

The very last step to take with this research was to make contact with a living relative to pass Charlie’s postcard onto, as per the wishes of its current owner (awaiting a reply). 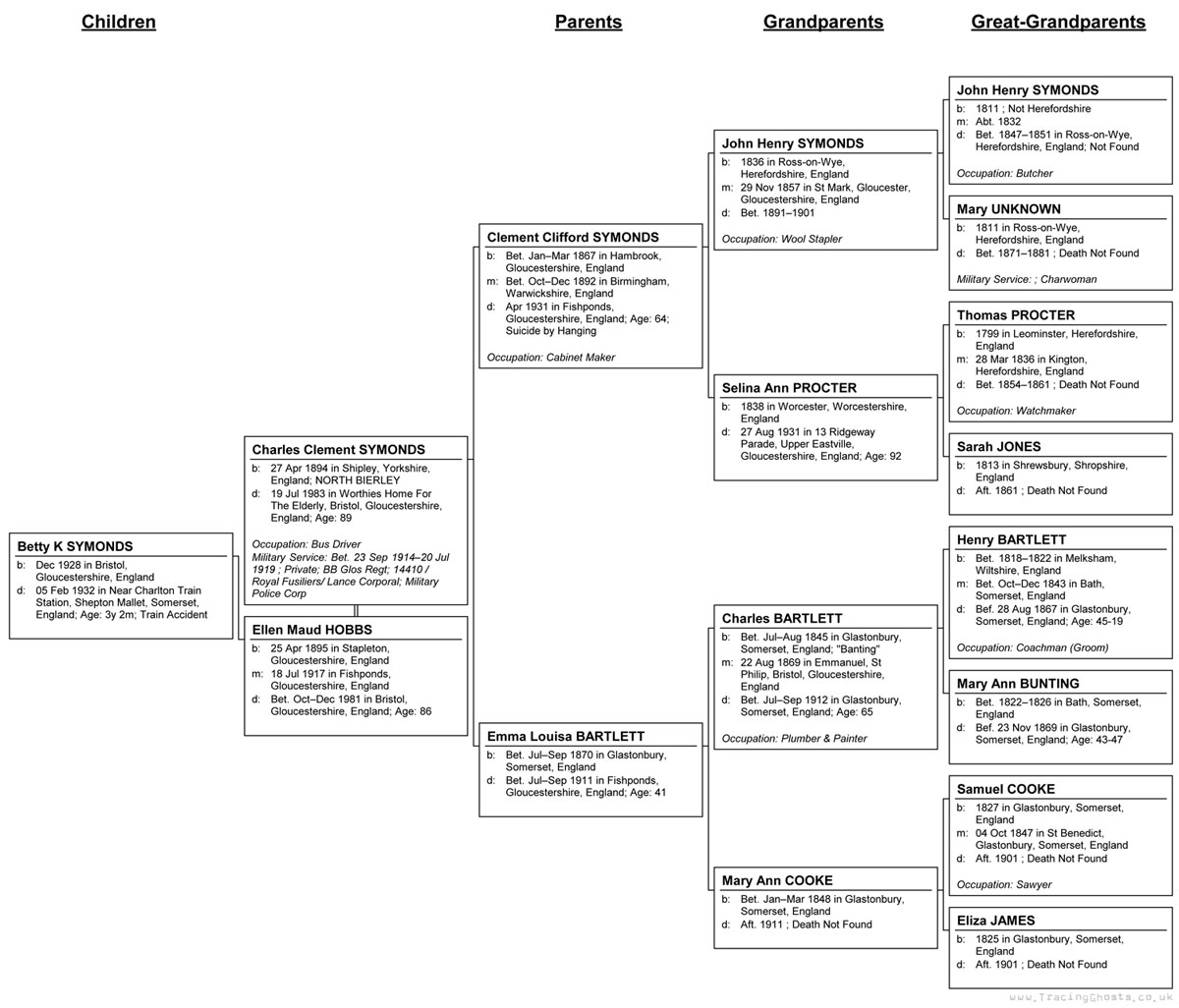