Intrigued by a photo of a gravestone slowly being swallowed up by a tree for Anne MOSELEY, the fourth wife of Henry MOSELEY, I decided to find out more. What I found was a man who had suffered many tragedies in his life, with the loss of three young wives and three of his children. Sadly, the only tree Henry left behind is the one now growing through his grave.

The headstone is situated in Nottingham Road Cemetery in Derby and reads: 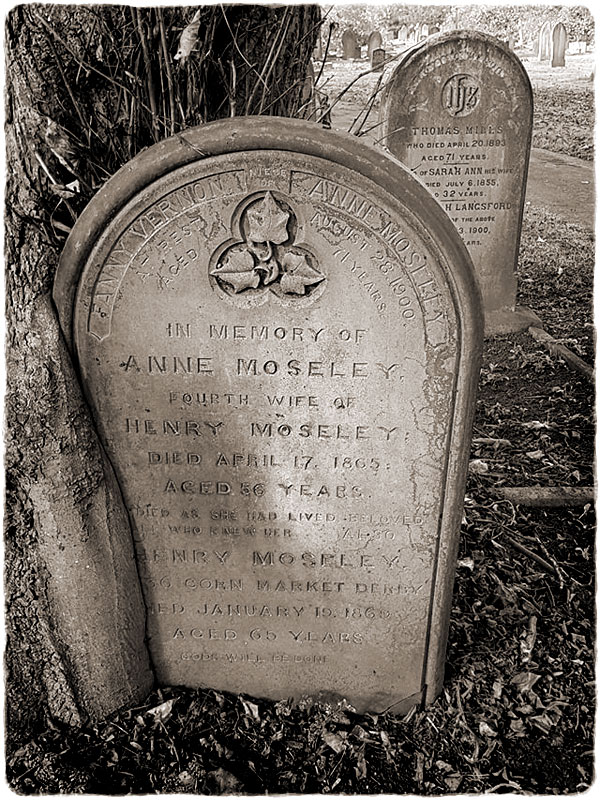 Henry MOSELEY was born 7th Jul 1803 in Leeds, Yorkshire and was a Carver, Gilder and Jeweller by trade. He was the first of six children born to parents George MOSELEY, an Inn Keeper, and Frances Jackson (George’s second wife). George ran the Saddle Inn in Briggate, Leeds up to his death in 1822 aged 49. Frances died five years later in 1827 aged 48. Henry’s uncle Robert MOSELEY was also a Carver, Gilder, Silversmith & Jeweller and was active in Derby from 1800 up to his death in 1856 aged 80. They worked in partnership from 1841 to 1846 when they dissolved their partnership “Moseley and Nephew”, then Henry worked on his own as “Henry Moseley & Co.”. They were also picture dealers and print publishers.

Henry married the spinster Mary YOUNG on 28th Aug 1828 at St Werburgh Church in Derby. Henry was 25 and Mary 22. They had one child together before Mary died in Mar 1832 aged just 26.

Henry remarried on 8th May 1834 at St Werburgh Church to Mary’s younger sister Harriet YOUNG (she was 20 and 3 months pregnant, and Henry now 30). They had two children together before Harriet died in Nov 1838 age 25, leaving Henry with a 10 year old, 3 year old and 1 year old to look after.

Henry married for a third time to the spinster Fanny WALKER on 8th Aug 1840 in Sutton on the Hill, Derbyshire (where she was from). Fanny was age 23 and Henry 37. The 1841 census shows they were living at Corn Market, along with Henry’s sister Elizabeth (age 21) and two servants (Joseph Paynter, 17,  and Jane Campion, 15). Henry and Fanny had two children together.

On 26th Feb 1846 Henry and his uncle Robert dissolved their partnership. A few month later during the Oct his third wife Fanny died aged 30. Henry was again left widowed and looking after two young children (age 4 and 1 1/2), plus the three from his previous marriages (age 17, 12 and 8). 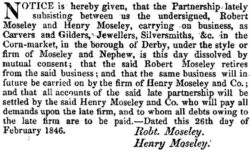 Henry set up a new partnership with James Brabazon MURPHY, the husband of his 1st cousin Louisa MOSELEY (daughter of Robert) and carried on trading under the name of “Henry Moseley and Co.”. He married for the fourth and final time to the spinster Anne THOMPSON on 7th May 1848 at St Modwen’s Church in Burton-Upon-Trent, Staffordshire (where she was living at the time). She was age 39 and Henry was now 45. Anne’s mother and sister were living in Derby, so perhaps this was how she come to meet Henry. They didn’t have any children together, which may have been why Anne survived longer than Henry’s first three wives. A few month later, on 11th Sep 1848, Henry’s company was declared bankrupt. A sale of their stock took place in the November, followed by several visits to the Birmingham District Court of Bankruptcy during 1849. Henry was able to start trading again in Mar 1849, but the pair were still paying off debts into 1850. 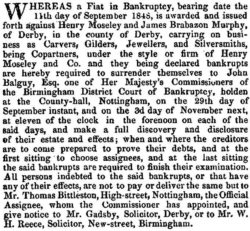 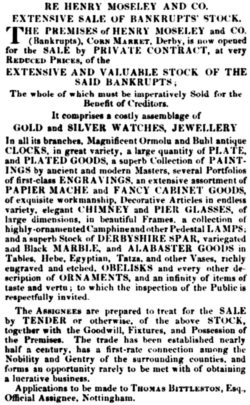 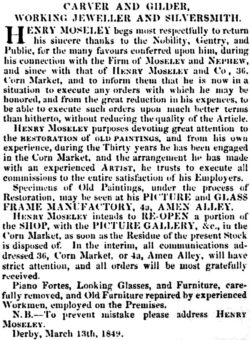 Newspaper articles reproduced with the permission of the www.thegazette.co.uk,  British Newspaper Archive and The British Library Board

In 1851 the entire family were living at 5 Babington Lane, Derby with one servant, but in 1855 tragedy struck yet again as Henry’s first two children both died. Henry George died 26th Apr age 20, and was the first to be buried in the new Nottingham Road Cemetery on 1st May. Rosamond died shortly afterwards at age 25. And if that weren’t bad enough, just three years later in 1858 Henry’s son Alfred also died, aged 16.

In 1861, Henry, Anne and his two remaining children (Mary and Frances), were living at Babington Cottage. Anne’s niece was also living with them (Fanny VERNON age 32, who is mentioned on the gravestone) and a house servant called Sarah King (age 18). 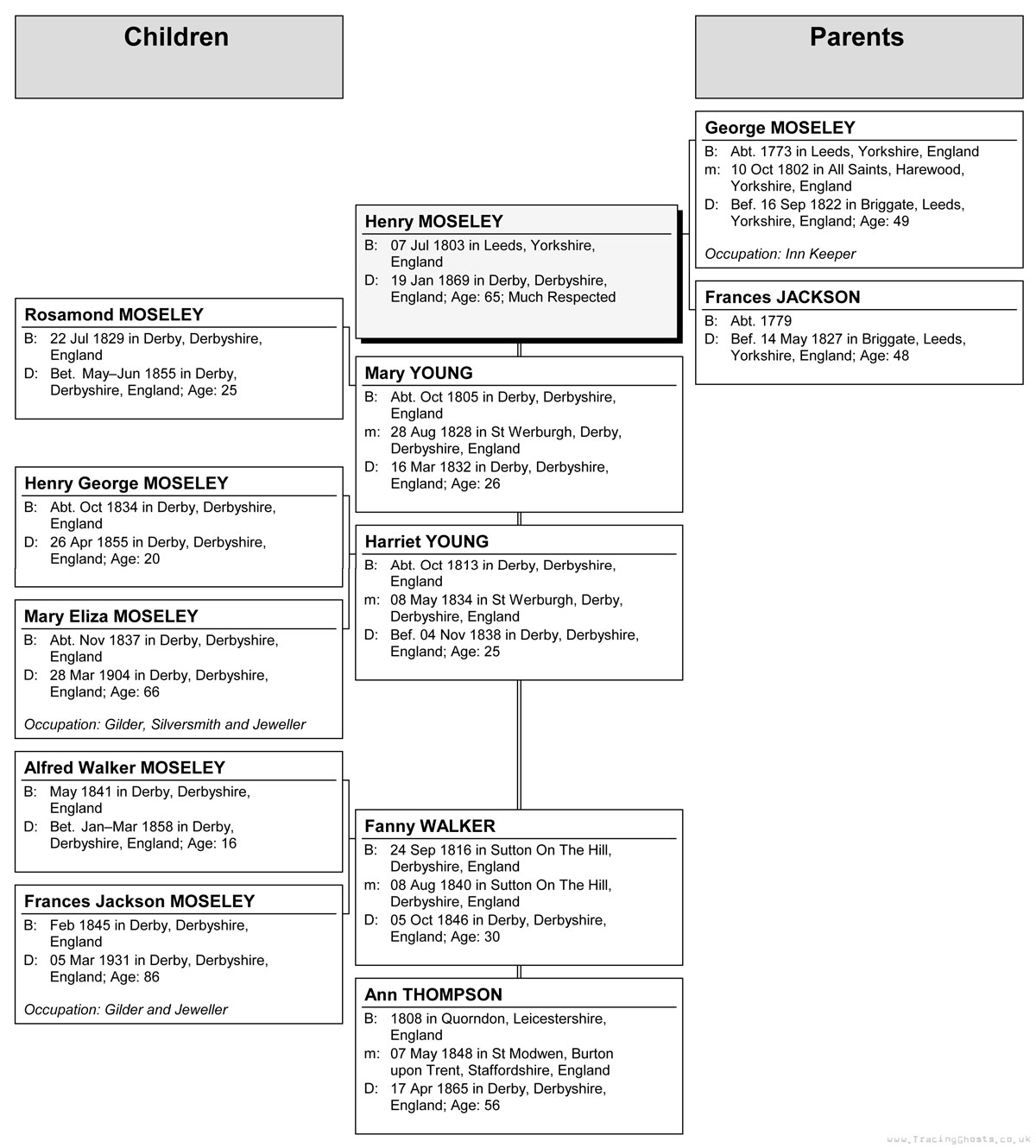 I was sent a lovely email by Ryan Goh, a wristwatch and pocket watch collector based in Singapore, thanking me for my article on Henry Moseley. He had recently acquired a pocket watch marked “H. Moseley DERBY” (which had made its way to Thailand, of all places) and thought it unlikely he would find out more about the maker.

“I’m a wristwatch collector based in Singapore who has very recently started collecting pocket watches as well. I purchased my first pocket watch from a Thai eBay seller, and it arrived at my doorstep a couple weeks ago. Upon opening the watch, I found that the hallmarks in the silver case date to 1859, the movement was signed “H. Moseley DERBY“, and one of the components featured very exquisite floral themed engravings (photos attached). There were countless independent watchmakers back in the day that have become virtually unknown today, and I assumed H. Moseley from Derby would be one of them because the seller did not see it fit to include his name in the listing title or description. Nevertheless, I thought I’d try my luck with a quick Google search anyway. Imagine my surprise when I found that another hobbyist had written a lengthy article about the tragic life of a Henry Moseley who had worked as a carver, gilder, and jeweller in the city of Derby in the mid 1800s! Not only do the initials, period, and locality match, but being a jeweller would explain why Mr. Moseley would be dealing in pocket watches and being a carver would explain the exquisite engravings.

“I‘m writing to thank you for unearthing the story behind my first pocket watch, which would otherwise be just another old pocket watch from just another forgotten watchmaker. I hope that my sharing was able to add some value to your efforts in genealogy as well!”

This is the pocket watch Ryan bought, signed “H. Moseley DERBY” along with some beautiful engraving inside. 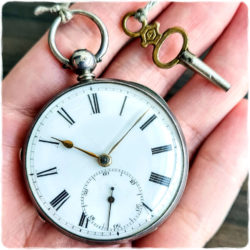 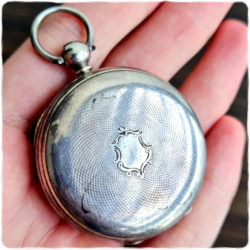 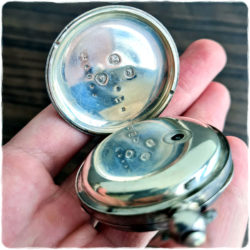 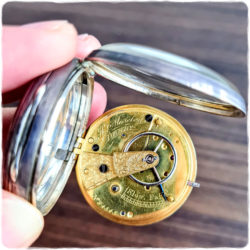