Up to this point I had not traced back from either side of my paternal 2nd Great Grandparents, Mary MITCHELL and Robert WHITE (on the BARNES side). I decided to look see if any more records had been added online since I last researched them.

The death record for Anna Sarah BARNES, nee WHITE (my paternal great grandmother) stated her mother’s maiden name to be Mary MITCHELL. Anna’s parents were both born in Ireland in the early 1840’s (or possibly earlier in her mothers case), and emigrated to America in the mid 1860’s. The 1900 census said they had been married for 25 years and had three children, two of which were still living (yet to identify the third child). This would mean they were married c.1874/75 but had not yet looked for a marriage record online.

I ran blanket search for surname “Mitchell” (Mitch*l*) and place “Banks, Antrim, Michigan, USA” (where they lived) to see what came up. There was one, marriage (Isabella, not Mary), one death (Sarah aged 14), and two family groups (one in 1870 and another one in 1900). Opening up the search to “Antrim, Michigan, USA” in marriages I found Mary Mitchell and Robert Whyte married 13th May 1871 in Mitchell (a recently settled mill village in Banks township).

“Mitchell, Antrim County: This flourishing mill village in Banks Township was settled in 1868. John McNeil became its first postmaster on April 26, 1869; the office operating until October 31, 1902. It was on Wiltse Creek, named for the pioneer settler E. Wiltse, who also ran the post office in 1876.” 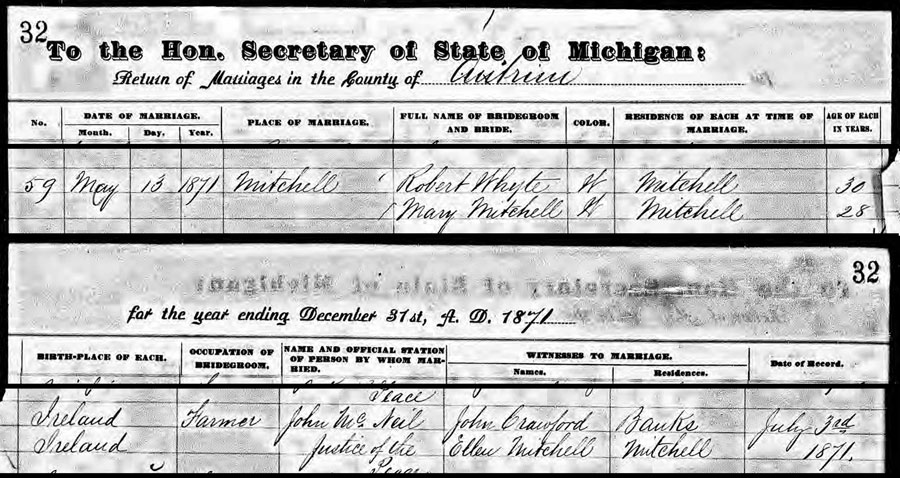 The record doesn’t included parents, but the witnesses were John Crawford & Ellen Mitchell. Robert was 30, a farmer living in Banks, and Mary 28 and living in Mitchell. They were married by John McNeil, Justice Of The Peace. Witness John Crawford looks likely to have been a friend of Roberts, and Ellen a relative of Mary.

In 1870 the one Mitchell family living in Banks included both a Mary Mitchell and Ella Mitchell (no relationships are noted):

Surely if this is the same Mary should be 27 if she was 28 the following year when married (born 1843)? However, Mary’s age fluctuates a LOT in various records; her death certificate says she was born in 1834 and her headstone has her date of birth as 21st April 1833. She died in 1904 aged 70, but the 1900 census has her recorded as 11 years younger at age 59. She was born anywhere in between 1833-43, so the fact that the above Mary says she was 33 in 1870 and 28 when she married the next year seems consistent. She probably just wanted to appear younger than Robert at the time they married.

The Mitchell marriage record found in Banks was for Isabella Mitchell to George E Clark in 1872. The witnesses were Robert John McNeal & Eliza Clark. Eliza was George’s sister, but Robert holds more clues. He was living in Banks in 1870 with his parents John & Catherine (four houses up from the Mitchell’s), and his death certificate states his mother’s maiden name to be Catherine Mitchell.

The Mitchell death record found in Banks was for Sarah Mitchell aged 14 who died in 1872, with mother Margaret Mitchell and “father deceased” noted.

Mary and Robert lived in Banks until her death in 1904, but Margaret and Ellen are no where to be found in Michigan in the 1880 census. Isabella and her husband were living in Cadillac, Wexford, Michigan in 1880 and don’t seem to have had any children.

The 1850 record includes a Catherine Mitchell, and when looking at the image for 1855, within the same property lived John & Katherine McNeil (nee Mitchell) and their son Robert (just born), who was a witness at Isabella‘s wedding in 1872. There was also a James & Eliza McNeil in the same property. John, Margaret and Catherine all state to have been in New York for 16 years. Catherine would have been about 4 on arrival in 1839, John about 28 and Margaret about 26. I was therefor certain this is the same family that Mary was living with in 1870, although no nearer to working out how she was related to them yet.

I didn’t find the family in the 1865 New York census, so they look to have moved to Michigan by then. Possibly the death of John prompted the move? It would have been around this time that Mary emigrated from Ireland to America, if the 1900 census information is correct.

Margaret’s youngest daughter Sarah died in 1872 at age 14, which was the same year Isabella married. The only Mitchell’s living in Antrim, Michigan by 1880 are unrelated, so what happened to Margaret and her remaining daughter Ella after 1870? I found Margaret Mitchell, mother-in-law, and Ella Mitchell, sister-in-law, living with Maggie & George Van Nostrand in 1880 back in New York, which could be them. They were at Myrtle Avenue, Brooklyn, Kings, NY.

They were living together five years previously too, in 1875, so if the correct Margaret and Ellen, they moved sometime between 1872 when daughter Sarah died and 1875 when the census was taken. George was a Steam Engineer.

In 1870, I found a Wm Vannostand (rather than George, so may be wrong), wife Mary E, son Philip (age 6) and daughter Josephine (age 7m). William was a Coach Driver. They were living in New York Ward 12 District 9, but haven’t worked out where that was. I haven’t found anyone closer to fit the family match yet.

In 1900, George & Margaret are living with their daughter Margaret (aka Margaretta) and her husband Zebulon Post (Head, 28, Poleman).

By 1910 George had died. Margaret was still living with her daughter and son-in-law (Head, 38, Agent).

But go back to the middle, 1905, and Margaret (recorded as “Mary E”) is marked as the head (59, Widow, Seamstress) with daughter Margaret and husband Zebulon below (34, Son-in-law, Truckman), a boarder called Martha M Morrison, an aunt Mary King (76, Irish, Servant) and a servant called Delia Slavin.

I’ve not found any trace of Margaret’s two other children, George and Josephine, or any other records to be able to confirm they are part of my Mitchell line, so will have to leave this branch out of my tree until further evidence can be found to confirm the Van Nostrand connection is correct.

As for John & Margaret’s other seven children, I know their youngest died in 1872, and the next daughter back (Isabella) married the same year. I traced her and her husband George E Clark in the 1880 census, an possibly the 1900 (no children either time) but no further. Apart from the possible Ellen in the 1880 census, her and all her siblings bar one seem to disappear. Their eldest child Catherine is the only member of the family I have been able to trace with any certainty.

Catherine Mitchell married John McNeal c.1853 in New York and had at least four children between 1854-66.

Robert I have been able to trace several generations to present day (more below), Thomas wasn’t in the 1865 NY census so may have died, Margaret is untraceable after the 1870 census (when age 9), and William died in 1872 aged 6.

It was at this point I decided to search my DNA matches for any members with the surnames Parmelee or Petoskey in their trees, in full knowledge that any cM match back to the Mitchell’s would be very small. I found fourteen matches for Parmelee but none for Peoskey, and as I got to the last in the list I finally found an exact match for the tree I had created from Edward Lewis McNeill, not once but twice! Two siblings had taken a DNA test who match me for a small 6.4cM and 6cM, and included a tree up to their 2nd Great Grandfather (which was why no Petoskey’s showed up). I had found DNA evidence to support my research leading back to my unknown 4th Great Grandfather Mitchell (their 6th GGF), via two 5th cousins 2x removed. I have other branch matches of a similar cousin distance at around 6cM, so this fits well.

Through traditional research and supporting DNA evidence, I can concluded that in 1870, Mary Mitchell was living with her uncle John’s widow Margaret Mitchell and three of her younger cousins. Although I still don’t know the names of Mary’s parents or her shared paternal grandparents with my DNA matches, I now have a link back to their placeholders and more names to search from for further DNA proof.