Can researching the Bromham, Bedfordshire parish records for any mention of the surname MAYHEW help confirm the identity my 5th Great Grandfather (5GGP) John Mayhew‘s parents?

Through traditional research I have traced up to my 5th Great Grandfather John Mayhew (and wife Kazey Grey). I don’t know when John was born as he died before the 1841 census, but if he was the age to Kazey then he would have been born around 1763. I know when he married Kazey (1800) and when he died (1804), but no age is given on any record. He lived, married and died in Bromham, Bedfordshire, England as did his son (my 4GGP), grandchildren and one branch of his great grandchildren. Before 1800 there don’t seem to be many Mayhew’s in Bromham, so was John born there?

I have six confirmed DNA matches to my 4th Great Grandfather, also called John Mayhew (1st wife Sarah Harrison (my 5GGP), 2nd wife Sarah Taylor), via two of his children other than my 3GGF (who is another John, b.1824). There are several more DNA matches who don’t have trees and are as yet unplaced. John and Kazey only had two children before he died and as only my 4GGP survived into adulthood the only DNA link to my 5GGP as a shared ancestor are via my 4GGP John.

I was therefore very interested to find four DNA matches with trees going back to a Mary Mayhew b.1771 from Bromham, Bedfordshire, England (two of these matches are brother and sister). Could my 5GGP John be a brother to this Mary? They could be of a similar age, and also have the Bromham link. Mary and husband Matthew Tebbutt were living in Bromham in the 1841 census. They married in 1797 in Bromham and had thirteen children there. Only two of their children are confirmed to have made it to adulthood, a third I’m not sure about. Of the two children I known who lived, both went on to marry and have children of their own, with one of the son’s being the line my DNA matches come down from.

These are my four DNA matches via Mary Mayhew, of which WJS & JR are on both Ancestry and My Heritage so can see our shared DNA segment is on Chromosome 7. There are two more in the shared circle on Ancestry but without trees, and four matches with small triangulated DNA on My Heritage whom I can’t place either (one has a Danish tree, one a Czechoslovakian tree, one a very small US tree and one no tree).

Assuming that Mary Mayhew was born in Bromham around 1771, there are three baptism records which fit her in 1769, 1770 & 1771. All have parents John & Elizabeth , and a suitable marriage record in 1766 for John Mayhew and Elizabeth Bettle. There is also a baptism in 1773 for an Elizabeth. Could these be the parents of my 5GGP John Mayhew, and if so why is there no baptism for him?

These are all the Mayhew parish records found in the parish transcriptions for St Owen’s Church in Bromham, which I have as  PDF file from the Bedfordshire Family History Society. Most of these are online, but don’t include all the details the original entries do, like where from when married if outside the village, and son/daughter/wife of on burials. Extra information in brackets is from the records [with my own note in straight brackets]. 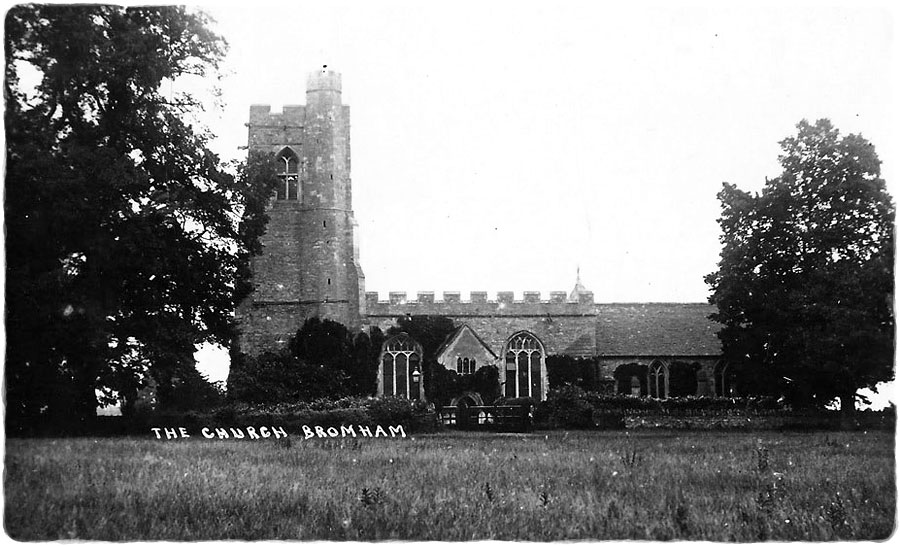 As John and Elizabeth were married in 1766, my 5GGP John could have been their first child. They had three daughters in a row named Mary, the first of which must have been born early 1769 as another Mary was baptised just three months later, and must have died before Mar 1770 when the next Mary was baptised (no burial found). Perhaps she was baptised in December because she was likely to die, like the the second Mary who was buried just two days after being baptised. The third Mary is whom I believe to be the wife of Matthew Tebbutt and my DNA link. John married twice again after Elizabeth died but no other births are recorded. It’s possible my 5GGP John could have been an only child from one of the next two marriages, but more likely he is from this one because of the size of the DNA matches I have via Mary.

I’ve not found a burial for John Mayhew, my possible 6GGP, but must have died between 1775 when he married Mary Allen, and 1799 when she died a widow. An age at death for my 5GGP John Mayhew would have been really helpful with placing his birth within a family.

In 1841 the only Mayhew family living in Bromham is my 4GGP John with his second wife and seven children (covering both marriages). As no birth places were included, I can’t search the country for any other Mayhew’s born in Bromham but living elsewhere.

In 1851 there were two families now living in Bromham; my 4GGP John with his second with and four children, and his eldest son Charles with a wife and two children. When looking at Mayhew’s who are recorded as being born in Bromham, along with my 3GGP John Mayhew b.1827 (who had moved to Kempston, Beds) are two more families:

Research showed these two men were the children of Thomas Mayhew & Elizabeth Whitten (2nd marriage). Their sister Sarah was married by this time (to Thomas King). From Thomas’s first marriage to Mary Smith, their first child died, but I don’t know what happened to the other three (William, Hannah and Thomas).

At the moment there is no conclusive evidence of the birthplace or date of my 5GGP John Mayhew and there are no baptisms records for a John Mayhew c.1760’s/1770’s in Bromham. A DNA link going back to a possible sister in Mary Mayhew of Bromham is a good start, but again, there is only circumstantial evidence that she was born in Bromham in 1771 and the daughter of John Mayhew & Elizabeth Bettle.

The earliest date for the surname Mayhew (aka Mahew, Mahu, Mow) recorded in Bromham is 1766. I suspect that John and Thomas, who were both most likely born in the 1740’s, were brothers and moved to Bromham but were not born there. As the circle of Mayhew’s from Bromham is very small, it is more than likely than my 5GGP is the son of John Mayhew & Elizabeth Bettle (or even his second or third wife if he were younger than his own wife Kazey Grey), and Mary Tebbutt nee Mayhew his sister. As there are at least two parish records for this family missing (John’s burial between 1775-99 and their first daughter’s burial in 1770), being unable to find my 5GGP’s baptism is therefor not unprecedented (although highly annoying)!

I’m going to trace the children of Thomas Mayhew and his two wives to see where that leads, and continue to search my DNA results for any further links to the surnames Mayhew and Bettle within Bromham itself and Bedfordshire on the whole.