I received two messages from two different Ancestry members recently regarding a member of my paternal FULCHER family line and the maiden name of his wife, both wondering how I had come about it. I thought I had better take a look at see!

My 4GGP’s John FULCHER & Ann GRUMMET (aka Crummett/Crommett/Grimmet) had four children that I know of, all born in Norwich, Norfolk, England:

The person in question was William Fulcher b.1809 and his wife Eliza (aka Bridget), and how did I find out her maiden name was CALLAGHAN? Eliza is also recorded three times as Bridget, and once as Betsey, which added a little confusion to things at first but were all definitely the same person.

William Fulcher was born in November 1809 in Norwich, Norfolk, England. He joined the army in 1825 at age 15 where he served for 21 years as a private in the 77th Reg of Foot. He was stationed in Ireland at some point where he met his future wife Eliza (nee Bridget Callaghan). They had five children between 1841-1852 (the first two before they were married in 1845):

In the 1841 census, William & Betsey FULSHER (note spelling) are living as married in Horncastle, Lincolnshire, England. William’s occupation is “Army” and has an “N” for “No” in “Where Born” as he was not born in the county of Lincolnshire. Eliza has an “I” for Ireland. They were the only two people within their household, but just 11 days later Eliza gave birth to their first child, MARY.

On Mary’s baptism record, her parents are recorded as William and Bridget FULSHER. William’s occupation was “Private in the 77th Reg of Foot”. A matching BMD birth index for Mary shows her mothers maiden name to be CALAGAN.

Their second child, ELIZABETH, was born in Waterford, Ireland in 1843. This would most likely be Waterford Barracks, given that William was in the army at this time. I have found no birth or baptism record for Elizabeth and any information found within family trees on Ancestry lacks source evidence.

William and Eliza (Bridget at the time) were married 2nd August 1845 in Templemore, Tipperary, Ireland (although this may be the Banns date).

William was discharged from the 77th Reg of Foot in 1846 whilst still stationed at Templemore. His trade was noted as “weaver” and that he was born in the parish of St Simon, Norwich (right next to St Clement where he was baptised). He spent 8 years of his service abroad in Jamaica and was in possession of one distinguishing mark for good conduct, although his overall conduct upon leaving was described as “irregular”!

There are also several Chelsea Pension records for him, one of which helpfully notes his death as 6th Dec 1858 in Norwich. 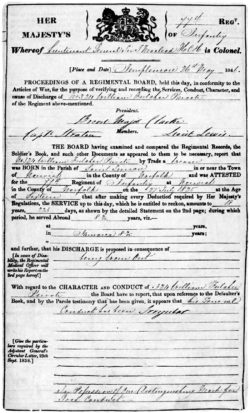 Their third child, WILLIAM jnr, was born in 1847 in the St Giles parish Norwich, a year after William snr had left the army. His baptism records his parents as William and Bridget FULCHER. William snr’s occupation was now “Weaver”, as stated on his leaving papers and like his father John before him. I haven’t found William jnr’s BMD birth index to again confirm Eliza’s maiden name.

Their forth child, ANN, was born in 1850 in the parish of St Giles, Norwich. Her baptism record records her parents as William and Eliza FULCHER. William’s occupation is now “Police Officer”. I haven’t found Ann’s BMD birth index either, so perhaps neither her nor William jnr were ever registered.

The 1851 census records the family of six living at Wellington Street, St Giles, Norwich. William is now working as a Police Constable and all birth years and places are confirmed here. His wife is only ever recorded as “Eliza” from this point on. His sister Elizabeth and family (my 4GGP) were living only a few streets away.

Their fifth and last child, THOMAS, was born in 1852. His baptism records his parents as William and Eliza FULCHER. William’s occupation is “Retired Police Officer”. A matching BMD birth index for Thomas confirms his mother’s maiden name to be CALLAGAN. As Thomas did not appear in the 1861 census, I looked for a death/burial record and found he died just over four weeks after he was born. His death certificate should confirm his parents names, but am pretty certain this is him. The fact he died so soon after being born may be the reason his birth was registered where as Ann and William jnr’s were not.

William snr died in 1858 at age 49 in Norwich. By 1861, Eliza was working as a Laundress to support her four children. The eldest child Mary (19) had no occupation (possibly because she had just had a daughter called Mary Ann, although she is not listed), Elizabeth (16) was working as a Silk Weaver, and the two youngest (William, 13 & Ann, 11) were at school.

In 1862, at age 15, William jnr joined the army, enlisting the the same regiment as his father (77th Reg of Foot). Then in 1863, an unmarried Mary gave birth to (another) daughter named Maria. They are found together in the 1871 census in the Norwich Workhouse. Eliza was living with a granddaughter in 1871 named Mary Ann age 10, whom I believe to be Mary’s daughter, born just before the 1861 census was taken but not recorded within the household (both children’s birth index records have a dash under mothers maiden name, which usually denotes an unmarried mother on the GRO website). At a push she could be an illegitimate daughter of Elizabeth but my money is on Mary; buying Mary Ann’s birth certificate would confirm it either way.

In 1866, Elizabeth married William Baldry (a cordwainer). She describes her father William as “Soldier (Deceased)” on her marriage certificate. They go on to have 13 children together in Norwich (their first two children were born before they married and the third child literally just after). She had a child almost every two years, the last two being twins born in 1887.

In October 1866, five months after Elizabeth’s marriage, Ann emigrated to New Zealand (the ships records state her to be 17, but she was actually 16). She married William Foster three months later and went on to have 14 children together (just beating her sister!); he was 29 and she was just 6 weeks shy of her 17th birthday. At some point after arriving in NZ, Ann changed her name to Ellen Elizabeth.

Ships records for the “Blue Jacket” show she travelled with a fellow Norfolk lady named Emma Bygrave. They were both Domestic Servants and travelled free of charge as part of the Assisted Emigration scheme. 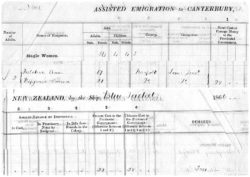 I’ve not found Mary in the 1881 census as yet, but her 17 year old daughter Maria had just got married and given birth to the first of ten children. Elizabeth now had nine children.

William jnr served for 21 years in the army, leaving in 1883. He then appears to have moved back to Norwich where two of his sisters still lived.  He died just 2 years later in 1885 at age 38 and was unmarried. Their mother Eliza also died in 1885 at age 68 in Norwich, a few months beforehand. William jnr’s military records show he never progressed beyond a private. It also shows where he served and when.

Mary remained unmarried, and in 1891 was working as a Paper Sorter. I’m not sure what happened to her after this but there is a matching death record for 1908.

Ann, aka Ellen Elizabeth Foster, died in 1908 at age 58 in Midhirst, Stratford, Taranaki, New Zealand (although her headstone says 59). Her husband William died just a few months before her at age 70. This is a photo of Ann (aka Ellen) and four of her children in New Zealand. 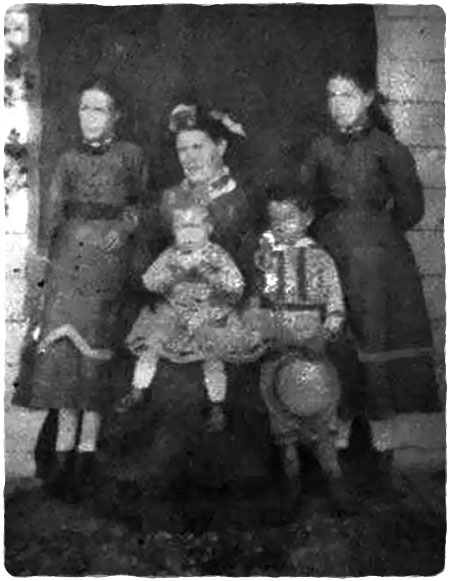 I believe there is enough evidence to confirm that Eliza’s maiden name was CALLAGHAN, and that she most likely baptised as Bridget but went by Eliza. It would have been good to have found the two missing Norfolk born children’s birth index records to confirm the name CALLAGAN again, but it seems they were either never registered or missed off when the quarterly data was transcribed at the time.

I have no blood relationship to Eliza myself, but those which do may find the surname CALLAGHAN in DNA match members trees and be able to place her and her father Lawrence Callaghan within them.

The other thing I have been able to confirm via DNA matching with myself, brother and aunt, is that the Ann Fulcher in my tree and the Ellen Elizabeth Foster (nee Fulcher) in their trees are in fact the same person.