An interesting bit of detective work presented itself to me at the end of August on a local Facebook page for Hadleigh, Essex. A local chap named Ron had been digging a large hole in his garden in order to insert a sunken trampoline for his grandchildren, when two feet down he unearthed a silver medal. Closer inspection revealed it to be a King George V naval Long Service and Good Conduct medal for a G W BRERETON. Ron wondered if any members of the Brererton family were still living in the area in the hopes of being able to pass it on back to them, and I decided to help.

“I was unwise to promise the grandkids a sunken trampoline to replace the one that I got rid of as it was an eye sore. Two feet down I found this WW1 Good Conduct Medal for a GW Brereton. WW1 medals have the name of the recipient in the rim. From the deeds of the house, which built in 1960-ish the garden (along with house) was part of the Salvation Army Farm, so it’s likely that it was lost in the field. I am looking to find the family if they are still in the area and give this back to them. Are the Brereton family still in Hadleigh? He was in the Royal Marine Light Infantry as far as I can find out.”

There were two versions of the King George V “Long Service and Good Conduct” naval medals, this being the first version which was awarded from 1910 and into the 1920’s (after which the design was changed on the obverse). This is the medal after Ron washed the mud off: 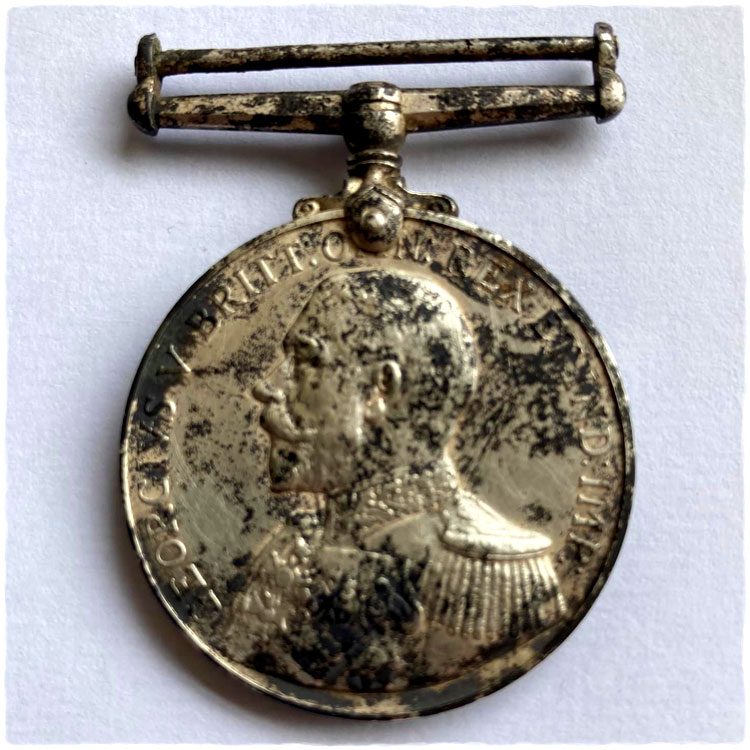 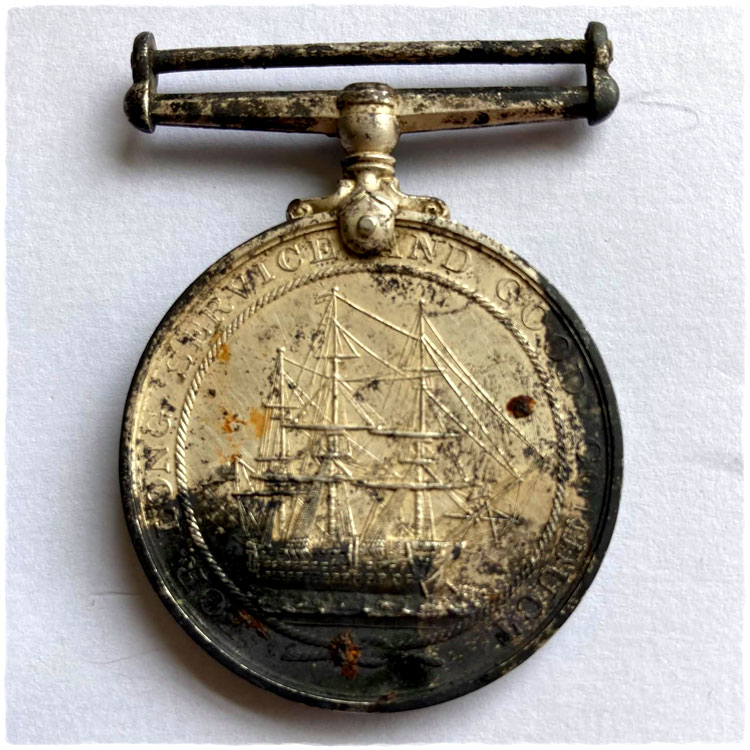 The first thing to do was discover exactly who G W Brereton was and then look into his family tree. This in turn would give me the chance to find living relatives by looking for children and grandchildren, nephews and nieces etc., and then finally try to locate some current contact details.

I found four possible military matches for G W BRERETON, but only one old enough to have received the above long service medal and who also just happened to have been in the navy. That man was George William BRERETON.

George William BRERETON was born 25th May 1874 in Bethnal Green, London. He was the sixth of nine known children born to James BRERETON (a silk weaver) and Hannah SAYER (a box maker).

James and Hannah married 30th Sep 1857 at St Philip Church in Bethnal Green when he was 29 and she 19 (although both were recorded as being one year younger on the register). Their children were born in Spitalfields, Shoreditch and Bethnal Green between 1859-1882, their youngest two sadly dying in infancy.

The family moved house several times up to 1891 when James and Hannah finally settled at 52 Lessada Street in Bethnal Green, situated right next to Regent’s Canal. The street is no longer there having been part of an area which received extensive bomb damage during WWII, and is now part of Mile End Park.

On 16th Jul 1891 when aged 17 (although stated he was 18 at the time), George enlisted into the Royal Marine Light Infantry: Portsmouth Division; Private #5904. Three months previously when the 1891 census was taken George had been working as a “whalebone dresser”. His enlistment papers record him as being 5′ 6″ tall with red hair, grey eyes, fresh complexion and a tattooed ring on his left little finger. It also states that he trained as a “Coxswain Steam Launch” in 1896, and received five good conduct badges up to 1915.

When the 1911 census was taken George was recorded at the Royal Marine Barracks, Forton, Alverstoke, Hampshire. He was age 37, unmarried and a Private in the Royal Marine Light Infantry. All seven of his living siblings were now married with children of their own, and grandchildren in the case of his oldest two siblings. It is interesting to note that the 1911 census stated that George’s mother had given birth to twelve children in total, with seven still living. I have only found evidence for nine children.

George was discharged on 27th Jul 1912 after 21 years of service and returned to back his parents house at Lessada Street (now at number 57 rather than 52). This happened shortly before or immediately after the death of his father James (aged 83).

George was called back into service when war broke out two years later. He saw active duty early on in Dunkirk and Antwerp, and spent very little time back in England throughout war.

George’s mother Hannah died aged 80 shortly after the war ended in 1918. He continued to serve as a Private up to 27th Jul 1919 when he was demobilised at the age of 45 having served for a total of 26 years. George was awarded the Long Service and Good Conduct medal on 31st Mar 1919. He was also awarded the 1914 Star, British War Medal and Victory Medal for his services during WW1, and entitled to the Clasp but was either not issued or not claimed by him.

George went home to Bethnal Green when he returned to civilian life, moving in with his sister Hannah and brother-in-law Thomas George BAKER who were living at 12 Wadeson Street, situated a little further north up the Regent’s Canal. They remained there until 1925 when they moved east to 16 Hedgemans Road in Dagenham, Essex. Several of Hannah’s children also moved to Dagenham with their own families at this time. George’s sister died in 1935 aged 72, and when the 1939 register was taken he had moved a short distance away onto Blackborne Road (now 65 years old and a retired labourer). His brother-in-law Thomas was still living at Hedgemans Road age 81 with two of his daughters (Mary and Elizabeth) at this time.

George died at Blackborne Road, Dagenham aged 66 on 14th Sep 1940, and his occupation was recorded as “night watchman”. His cause of death included chronic bronchitis and emphysema, so was quite possibly a life-long smoker. The informant was his niece “H C CARTY”, aka Hannah Charlotte Carty nee BAKER, the eldest daughter of his sister Hannah. If George was still in ownership if his medals when he died, they most likely passed down to a relative at this time. He doesn’t seem to have left a will, which is a shame.

Now onto finding a living relative! Of his six surviving siblings, I decided to start tracing the decedents of George’s sister Hannah first.

Hannah Sophia BRERETON married Thomas George BAKER on 3rd Aug 1884 in Bethnal Green. George was nine at this time. They had nine children together between 1885-1903, mostly in Bethnal Green where Thomas worked as a Boot Finisher. They lost one child aged 2 months, and a further daughter never married, remaining at home with her parents and uncle George. The other seven all married and had children of their own, and all began to show connection to the west side of Essex as they moved out of London.

Of Hannah’s children, I discovered two of Albert’s daughters died in the Southend area as did one of Hannah Jnr’s sons. There was also the possibility that at least four grandchildren were still living in the Southend area. I identified one of Hannah’s granddaughters (Debbie) as the owner of a family tree on Ancestry and happily discovered she was also an active user. I had found my first contactable living relative, but also one with an interest in family history and even from the local area! I sent her a message and got a swift reply:

“Wow, I know George served in the navy [from] what I have researched. I’m in the early days of doing this side of [my] family. Spent time researching my father’s side. The Baker/Brereton/Davis side is intriguing. My mother was born in Romford. Myself in Ilford and I grew up about 1 mile from Hadleigh not far from Vic House Corner. My father still lives there. I would love to meet up with Ron to chat. We did have family in the area years ago. Thank you for contacting me.”

I couldn’t have asked for a better reply! I swapped contact details between Ron and Debbie, and two weeks later George’s medal was finally back home with a family member. Here it is again after receiving a sympathetic cleaning. 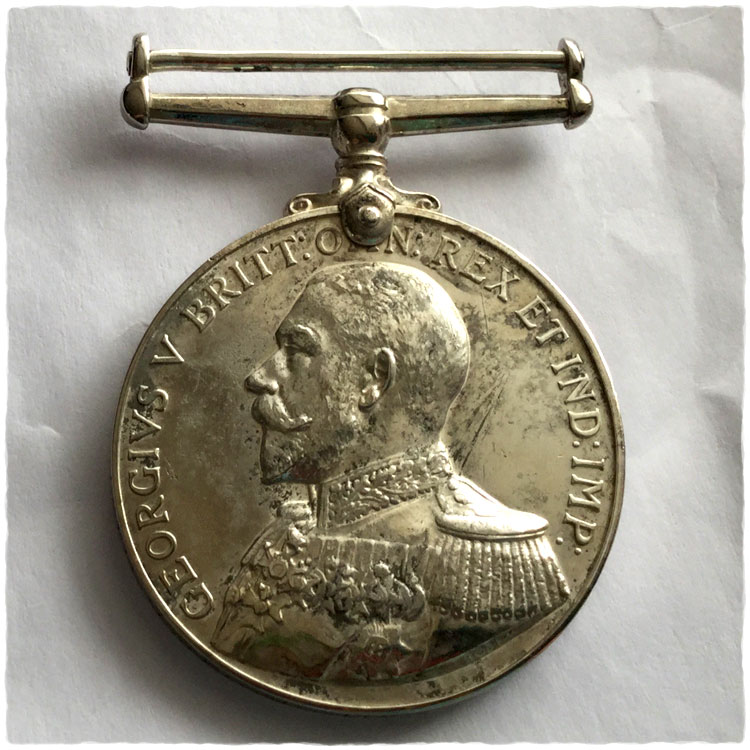 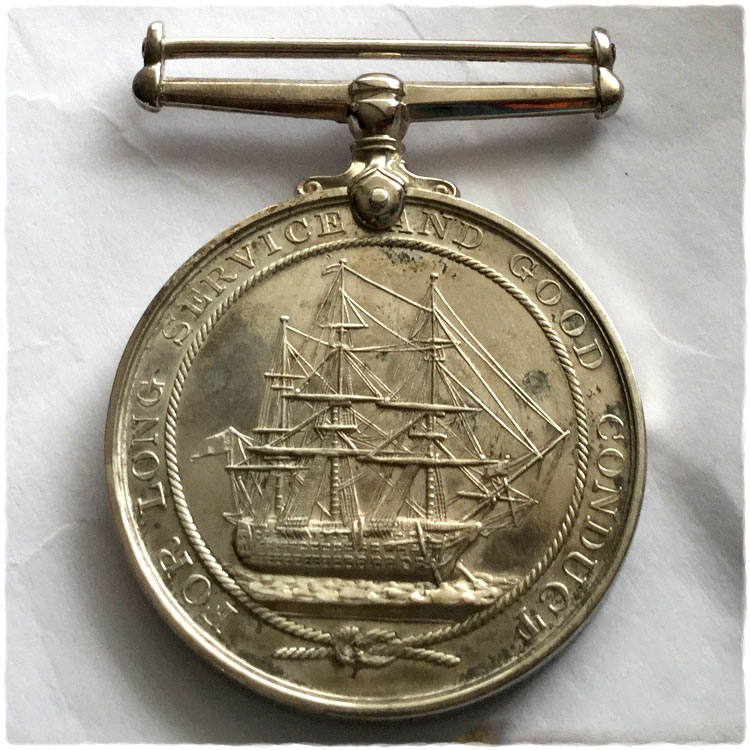 From Bethnal Green To Hadleigh
The Medal’s Last Resting Place

The medal was unearthed two feet down at the bottom of a garden on Chapel Lane, and looking at historical maps over a hundred year span reveals it was buried within an area which up until the 1960’s was originally part of the Salvation Army fields (part of their Farm Colony). An interesting article on Chapel Lane can be found here, showing how it started life called Sayers Lane, then Workhouse Lane, then renamed Chapel Road and finally Chapel Lane by 1911.

Theses two maps show how the area looked between 1919 when George received his medal, and 1939 shortly before his death. The red plot shows where the original property line was situated (1890’s to early 1960’s), with the modern plot overlaid in green extending further out after the entire field was developed for housing. 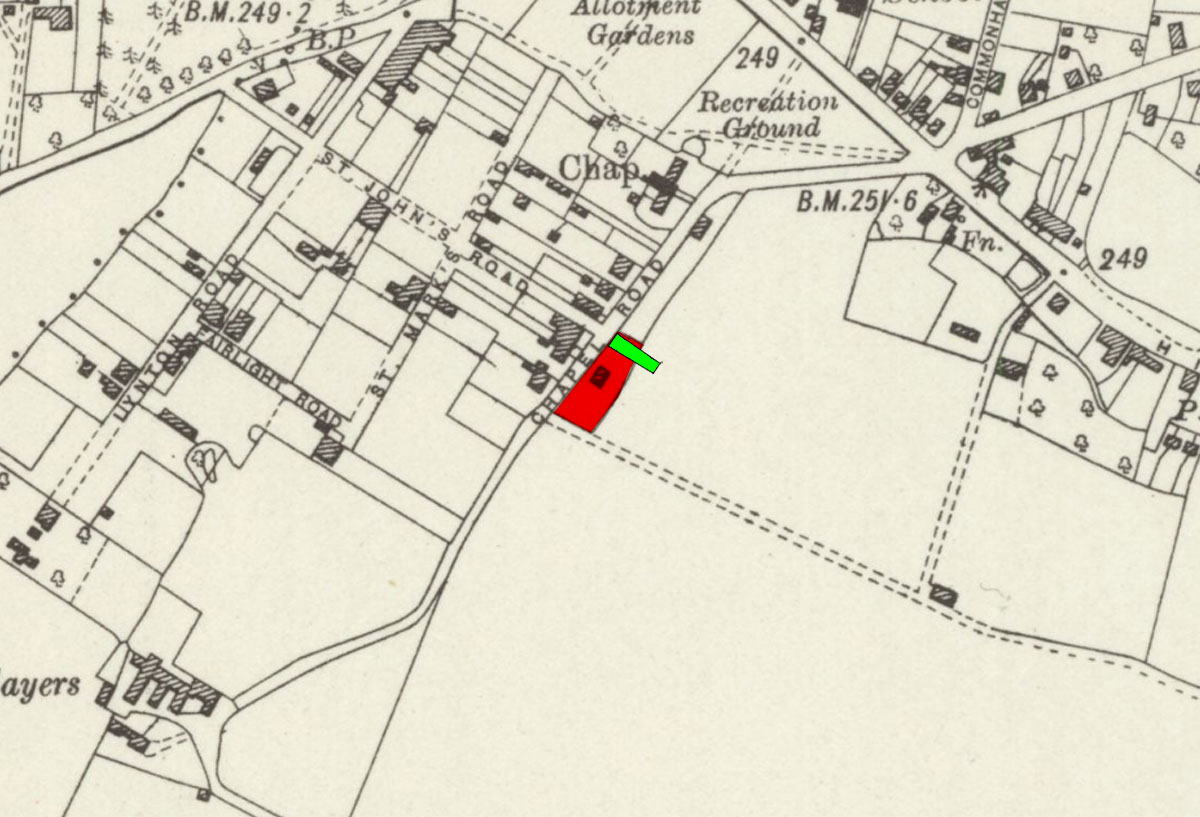 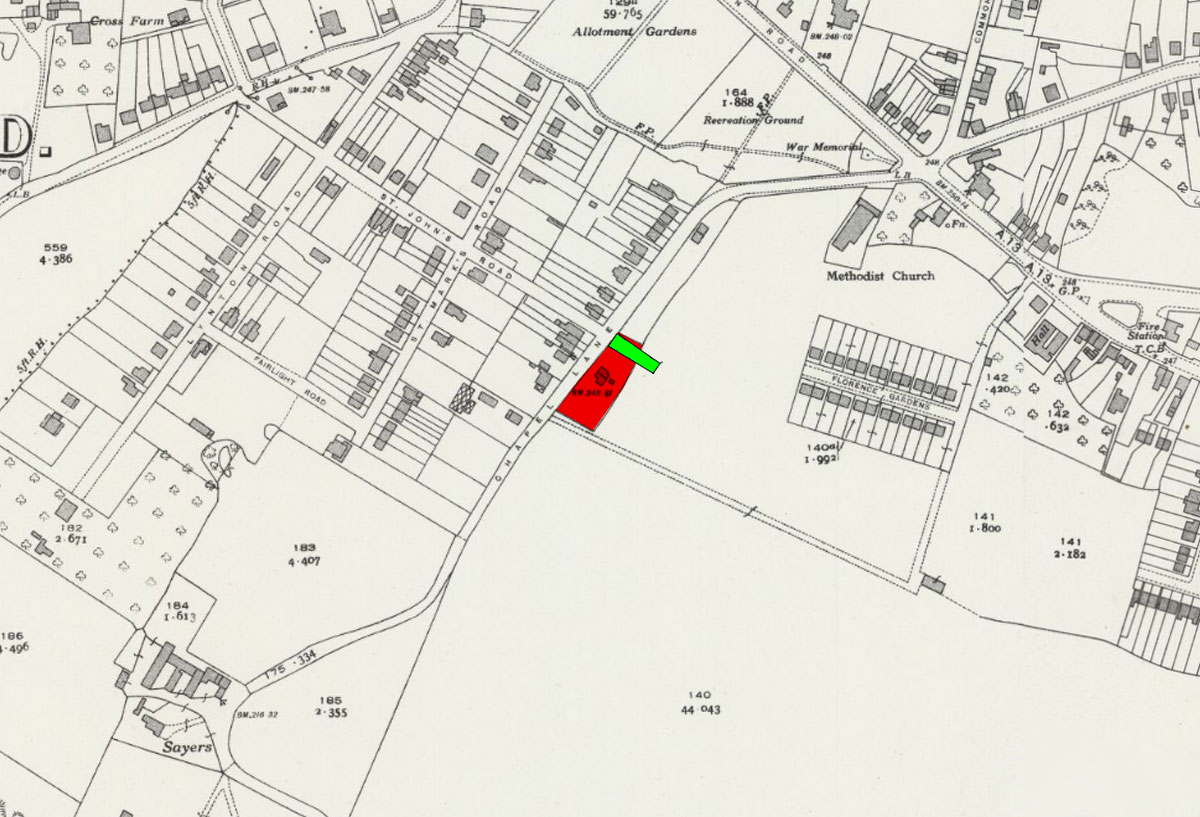 Maps reproduced with the permission of the National Library of Scotland.

George doesn’t appear to have had any obvious links to Hadleigh or south east Essex at all in his lifetime, nor did his sibling or their children. Did he loose his medal, sell it, was it stolen? Perhaps he even threw it away as some soldiers did due to their experiences during WWI? There is a slim possibility the medal may have come into Hadleigh via London on one of the Salvation Army barges which took the bricks produced by the colony up the Thames as they often came back again with loaded with horse dung to fertilise the fields with as well as rubbish. However, the depth the medal was found at is intriguing as it was far too deep for normal ploughing and much more likely a purposeful burying. Could George have come to Hadleigh to see the War Memorial situated at the top of the lane and buried one or even all of his medals in the field after this? Sadly, this part of the medal’s story may never be unearthed!