There were seven different photographers amongst the Lee sisters Cartes de Vista taken in Devon, Dorset, Hampshire, Kent and Sussex. Can you help identify anyone?

Click on a name to shoot downwards and find out more about the photographer, see the portraits they took and read my thoughts on dates and who they may be.

Edward H Cox & W Durrant
11 Bedford Circus, Exeter and at Torquay
Awarded Prize Medal
Artists and  Photographers
This picture can be enlarged to any size and a valuable painting produced in Oil, Crayon or Water Colour

William DURRANT was born 1837 in Brighton, Sussex. He married Rosa Kate BROOKE in 1870 (who was 13 years his junior), and in 1871 were living in Torquay, Devon where he was working as a photographer. In 1878 Durrant set up in partnership with Edward Henry COX, establishing a branch at 11 Bedford Circus, Exeter. They hired a young Australian photographer by the name of John Ross Browning to run their Exeter studio (where he also lived) whilst they worked from 5 & 6 Park Crescent, Tormoham, Devon, where William and his family lived. In 1883, Cox and Durrant handed over their Exeter studio to Brown and set up a new studio in Torquay at 8 Victoria Parade, where Durrant was again living with his family. Cox and Durrant remained together at the Victoria Parade studio until around 1893. By 1891 Durrant and family had moved to 46 Fleet Street, Torquay. William has no occupation listed but his wife was stated to be a photographer. The 1911 census draws more light as to why William no longer worked. Rosa was the head of the household with William listed beneath as “husband”, the only time I have ever come across this, and at the side is written “at the age of 59 totally blind and invalid”. William would have turned 59 in 1896. Their son Harold was still living with them at age 36 and working as a “photographic artist”. William died 26th April 1918 at the Infirmary, Newton Abbot, Devon aged 81. Rosa died in 1930 aged 80.

Edward Henry COX was born 1847 in Camberwell, Surrey but grew up in Devon. His younger brother Robert William COX also worked as a photographer (all over the country), whilst their sister Rose married an artist (painter) called Robert STARK. Their father worked for HM Customs. Edward married Annie Julian in 1872 and they had three daughters. They were living in Tormoham, Devon in 1881 and Ashburton,Devon in 1891. After this I loose track of the family.

There is a very short time period the photo could have been taken, between 1878-1883, which fits with the 3/4 length body, card shape and back design. I found a photo online with the same back dated 1879, although this one may be very early 1880’s due to dress style. 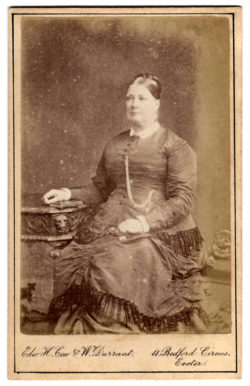 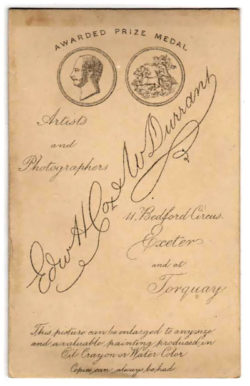 William CROFT was born 1834 in Dartmouth, Devon. He married Harriett MARSH in 1856 and they had four children, the first born in Devon and the second in Australia where they lived until around 1866 before returning to Devon and setting up a photography studio. William’s profession was originally as a painter (as was his father’s), and diversified into photographer in the 1860’s. The family were living at 3 Union Street, Torquay in 1871, and an advert for his business puts him still there in 1874, along with 57 Abbey Road. By 1881 the family had moved to Lewisham in Kent.

The card back style and rounded corners, and with Croft moving to Kent by 1881, points to it being taken in the late 1870’s. 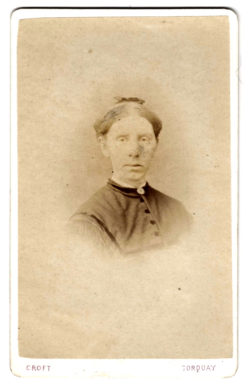 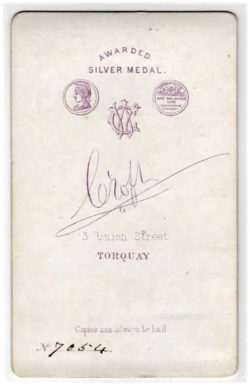 George Conway NESBITT was born in Blandford Forum, Dorset in 1848 and was one of five children born to John NESBITT (a boot maker) and Mary Anne HUNT. John and Mary lost their only daughter at age 1 in 1853 and all four of their sons became photographers (Albert, Tom and Charles being the other three boys). Albert worked from Blandford Forum (1861, age 20), Huntington, Huntingdonshire (1871, age 30) and finally Christchurch, Hampshire (1881, age 40). By 1891 he was working as a house painter. Tom worked from Blandford Forum his whole life, and Charles worked from Richmond, Surrey for about 20 years, then moved to Barry Dock, Glamorgan, Wales before 1901.

In 1871 (age 23) George was lodging at 68 North Street, Chichester, Sussex and working as a photographer and artist. A directory from 1878 puts him at 9 Tiverton Terrace, Bournemouth, Hampshire and in 1881 9 Triangle, Bournemouth, Hampshire (which were the same place). Bournemouth was part of the historic county of Hampshire but now in Dorset, so is recorded in both counties in records. His older brother Albert had previously worked from this address in the 1860’s. A directory from 1885 then puts George at 118 High Street, Notting Hill, Middlesex, the same place and date he married an Australian lady by the name of Esther Mary Alice RANDALL (she was 20 years his junior, they didn’t have any children together). An 1890 directory lists George at 50 High Road, Kilburn, Middlesex and in 1891 George was living at 35 Cambridge Avenue, Willesden, Middlesex (wife not present). Electoral records lists both addresses as his in 1896. In 1901 both George and Esther were living at 68 North Street, Chichester, Sussex. In 1901 George was a visitor in Holborn, London and now working as an Insurance Agent. Further directories places him at 88-90 High Street, Sutton, Surrey 1918-1921. He moved around a lot!

George NESBITT worked from 9 Triangle (aka 9 Tiverton Terrace), Bournemouth from at least 1878 to 1881, and was in London by 1885. This makes for a small time frame for the photograph. 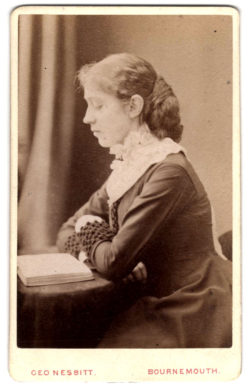 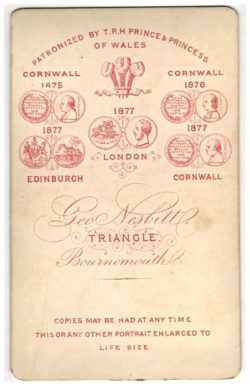 George LYDFORD was born in 1835 in Gillingham, Dorset and was one of four children born to Richard LYDFORD, a Carpenter and Ann ANDREWS (aka Ann YOUNG), who was over 20 years his junior. George’s older brother Richard was an organist and professor of Music, whilst his younger brother was a draper’s and grocer’s assistant who ended up in Brighton Workhouse in 1911 (age 64). I don’t know what happened to his sister Mary.

George started out working as a joiner and carpenter like his father. He married Elizabeth Mary SCANNELL in 1857 and they had three children all born in Gillingham (1859-1863). Around 1865 George changed profession and the family moved to Shaftsbury, Dorest (looking at the age of the first photo). In 1871 they were living at Church Lane, Shaftsbury, Dorest and in 1881 Salisbury Street, Shaftesbury. George was not at home in the 1891 census, nor can I find him elsewhere. By 1900 the family had moved to Greenwich, Kent where he was now working as an accountant. 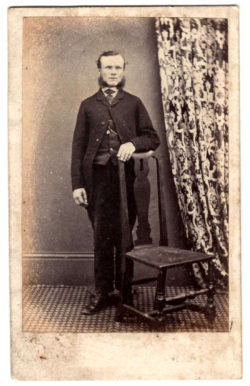 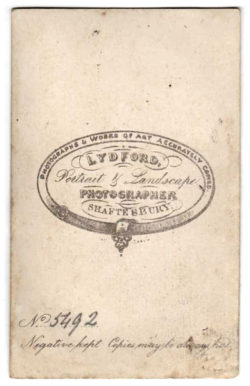 Lydford
Shaftesbury
Artist
Pictures copied enlarged or reduced plain or coloured. Life size portraits in oil from L250. Views of Shaftesbury and neighbourhood from 6d each. Pictures framed to order. 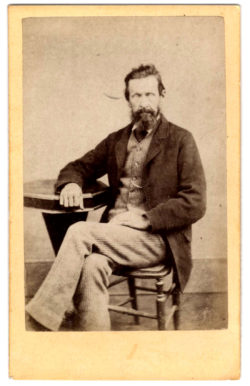 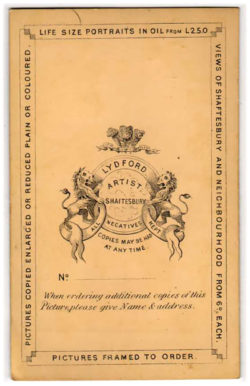 Samuel John LINE was born in 1859 in Southampton, Hampshire and was one of three children born to Samuel LINE, a boot maker, and Sarah HELPS. Samuel John LINE married Mary Margaret WHITE in 1882 and they had four children. They lived at 16 Bernard Street, Southampton for many years (and Samuel was living there prior to marrying). In 1911, the family had moved to 4 College Terrace, Southampton where Samuel was now working as a Superintendent Registrar.

It’s hard to tell from the pose and fashion of the children the date of the photograph, but the card back style looks late 1880’s. 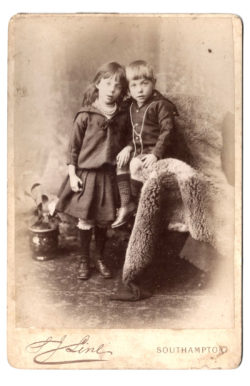 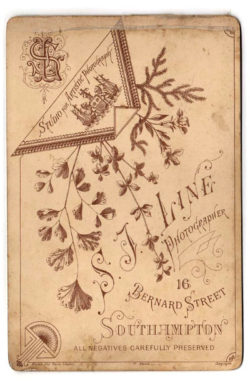 John USHER was born 1835-1840 in Oxford, possibly one of three children born to Henry USHER a shell flower maker, but looks to have been brought up by his uncle Thomas USHER. In 1851, John and his younger brother Henry were living with their uncle and aunt in Ramsgate, Kent. Both John (age 11) and his uncle were working as shell flower makers at the time. By 1861 they were living at 20 Sussex street, where John and Thomas were now working as photographers. John married Harriett Sophia HARTLE in 1866, but she died just four years later. In 1871, John was living at 8 Sussex Street with his brother-in-law Henry Hartle (who was his photography assistant). In 1873, John married again to Annie GRIFFITHS in Ramsgate and had one son. By 1881 the family had moved to Mile End Old Town, London then Shorditch in 1891 (still working as a photographer). By 1901 John had died.

Electoral records list Thomas at 8 Sussex Street in 1872, although census records have him living at 1 Primrose Villa. Kelly’s directories list John at 90 Queen Street, Ramsgate in 1874 (which is listed on the back of other photos found online and look late 1870’s in design) and electoral records list both 90 Queen Street and 8 Sussex Street for him in 1875.

The card back looks early to mid 1870’s, which fits with the pose and dress style as well as dates above. This is one of the few photographs of women not wearing black! 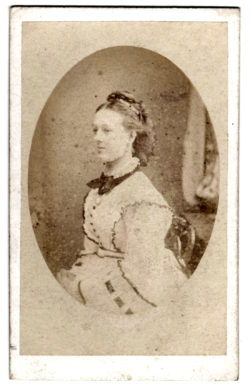 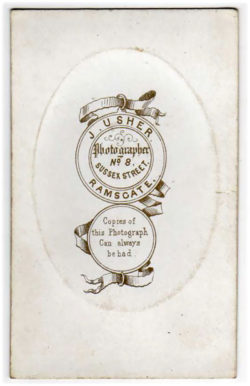 William DAWSON was born 1843 in Bury, Huntingdonshire, one of seven children born to William DAWSON, a blacksmith, and Sarah RICKETTS. There is an excellent biography of him here, so won’t go into too much detail below.

William married Susan Elmer HUNTER in 1863 and they had nine children between 1864-1880. The family moved to Brighton c.1869 where he set up business as a beach photographer. His business was listed in Kelly’s Directory as 106 London Road from at least 1878, and from 1884 he was working from 128 Richmond Road. He retained 106 London Road for use as a tobacconists up to 1894, and in 1891 his profession is listed as “Mineral Water Maker, Photographer and Tobacconist”. Apparently Susan filled for divorced in 1894 due to William’s his relationship with his young photography assistant, Sarah Kate Dawson (25 years his junior) but don’t think it can have been granted. William and Sarah lived together as married and had three children (one of whom died), and even stated to have been married for 22 years in the 1911 census (1889 – possibly the start of their relationship?), but records show they didn’t actually get married until the end of 1917, registered in the same quarter that Susan died. William himself died shortly after in 1920 at age 76.

The card shape and back design point to this photograph dating from the early 1880’s, which fits with the change of address in 1884.