There were two different photographers amongst the Lee sisters Cartes de Vista taken in Nottinghamshire. Can you help identify anyone?

Click on a name to shoot downwards and find out more about the photographer, see the portraits they took and read my thoughts on dates and who they may be.

Alfred Wilson COX was born 1831 in Nottingham, Nottinghamshire and was one of at least three children born to Alfred COX, manufacturer of hosiery, and Hannah WILSON. His other two siblings were born in Radford, Northamptonshire where the family was still living in 1851 where Alfred was working as an artist. Alfred married Ellen Elizabeth PRATT in 1853 in Nottingham and they had four children between 1854-1872. In 1861 he was working as an artist with oils, but was also a photographer by at least 1858. In 1871 the family were living at 11 St James Street, Nottingham where the following two photographs were taken. His wife and children were living at 11 St James Street in 1881, with Ellen running the business. Their elder daughter Ellen was an artist painter, so probably also worked for the family business for a time. Alfred, it would seem, absconded up to Harborne, Staffordshire at some point before 1881 and was living there as married with a lady called Rose, who was half his age!

Alfred died 5th Nov 1888 at 2 Great George Street, Liverpool, Lancashire and his probate record shows he was previously living at 21 Farclife Place, Manningham, Yorkshire and was a “Landscape and Portrait Painter and Cycle Agent”. Administration of his will was left to his brother Henry, who was a portrait painter living in Leicester at the time. 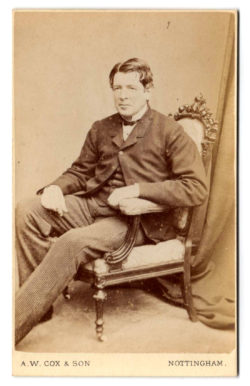 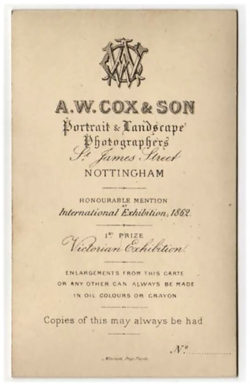 The card back design is typical early to mid 1880’s, whilst the pose and fashion is more 1870’s (possibly in keeping with being an older gentleman). As Alfred had moved up to Staffordshire by 1881, this photo would have been taken by one of his sons or even his wife Ellen. 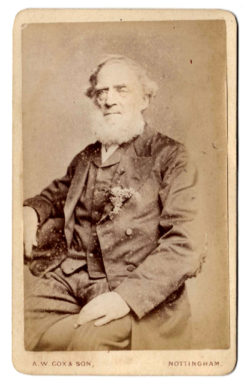 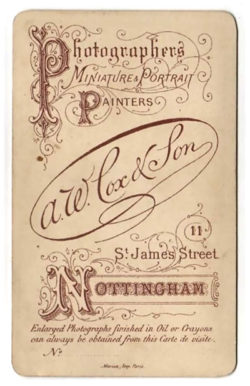 Samuel KIRK was born 1847 in Snenton, Nottinghamshire, and was the third of five children born to Samuel KIRK, a professor of music, and Sarah BROWN, an embroiderer. His eldest sister Sarah married William SEWARD, also a renowned Nottingham photographer. Samuel married Agnes BRIGGS in 1868 when he was age 21 and they had two children by the time of the 1871 census, and working as a photographer.

The top card back design with square corners points to c.1876, as does the fashion and pose. The bottom card back design and rounded corners points to 1879-1881 but if it weren’t for the backs I would have thought them taken at the same time. Perhaps the chap’s photo is a slightly later reprint from the same photography session? The chap has a wedding ring on, and although I can’t be sure, I think the lady does too. 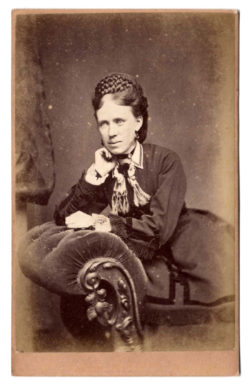 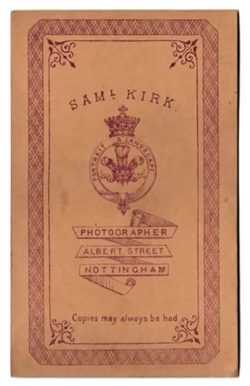 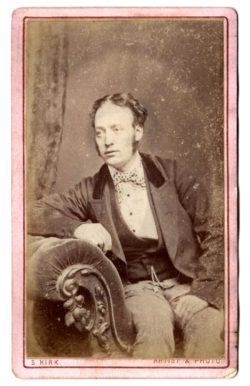 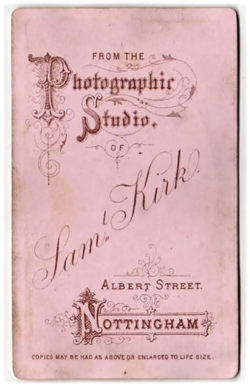