George Edward CAREY, wife Susan BALDWIN and family were the first occupants of Reservoir Cottage after it was built in the early 1900’s and they lived there until 1927/1928.

George CAREY married Sarah BALDWIN on 24th Oct 1879 at St Peter’s Church in Thundersley. In 1881 the couple were living in Daws Heath (listed next door to his parents) and George was working as an Agricultural Labourer. They had four children together, all born in Thundersley:

By 1891 George and family had moved to Common Lane, Thundersley where he continued to work as an Agricultural Labourer (they were living next door to Sarah’s brother George BALDWIN). By 1901 George was in the employ of Southend Waterworks as a their Foreman and had moved along the road to The Common, Thundersley (next to the reservoir). Son William (age 17) was working as a Postman, and son Henry (age 13) was presumably at school. Eliza was in service in 1901, age 15 and working as a Domestic Housemaid for a retired farmer named Joseph A BROWN in South Benfleet. I’ve not found their other son Edward, who would have been 18 in 1901. Sarah’s brother and his family moved to the property next door and was now also working for the Waterworks as a labourer.

The first mention of George living at “Reservoir Cottage” I have found is in a newspaper article from 1907 when George was letting out a bungalow in Daws Heath. In 1908, George and Sarah’s eldest and youngest sons (Edward 26, and Henry 20) travelled to Jersey City in America. Edward’s occupation was listed as “Miner” and Henry as “Labourer”. Their closest relative was listed as their parents at Reservoir Cottage, Thundersley. Neither appear in the England 1911 census, nor can I find them in the US 1910 Census or Canadian 1911 census (but suspect they were still in North America during this time).

In 1911 George and Sarah were living at “Reservoir Cottage” continuing his employ as a the Waterworks Foreman. They were listed on the Electoral Roll at Reservoir Cottage from 1918 until Spring 1924, then from Ashland, Daws Heath from Autumn 1924 up to the 1939 Register where his occupation was listed as Retired Reservoir Keeper. Sarah died five years later on 21st Mar 1944 aged 82 (still living at Ashland, Daws Heath), and George died just over a year later on 23rd Apr 1945 in Westcliff-on-Sea aged 87. George was the only one of his siblings to work for the Waterworks.

What became of George and Sarah’s four children?

Shortly after war broke out, EDWARD finally shows up again, travelling from Canada back into the US to Jersey on 9th Sep 1914. He was now 32 and unmarried with occupation listed as “??? Work” (when he arrived in 1908 he was working as a Minor). He gives his parents as his contact at “Reservoir Cottage, Thundersley, Essex, England“, confirmed his first time in the US was 1908 and last departure from US as Aug 1912.
Edward returned from the US at some point after war broke out and enlisted into the Royal Engineers in 1916. He was age 35 at the time and still working as a Minor. His address for pay as listed in 1919 after being demobilised was Reservoir Cottage.
Edward was registered to vote from Reservoir Cottage between 1918-1921, and married Mary Mabel CAMERON (nee GREEN) on 1st Aug 1920 in North Woolwich, London. They both show up on the Electoral Register there from 1923-1927. It looks like they had son together, and Mary also had a daughter from her previous marriage.

In Sep 1927, Edward leaves England for Malaysia. His occupation was listed as Foreman, and he travelled 1st class. On his return 11 months later in 1928, he was listed as a Ganger (aka Foreman) and travelled 3rd class. I’ve not found any evidence his wife travelled with him, but that’s not to say she didn’t. They both show up again in the Electoral Register in 1929 back in North Woolwich (same house), where they lived until at least 1934. Then from 1937 until at least 1939 they lived in Erith, Kent. The 1939 Register lists Edward’s occupation as now “Public Works Foreman (Heavy Work)“.

WILLIAM married in 1907 to Rosa Alice PLAYLE and was working as a Engine Driver (Stationary) for the Southend Waterworks Company. He was called up for service on 27th Feb 1917, but was deemed to have enlisted on 26th Jun 1916. In amongst his military papers is a form submitted on 19th Jun 1916 and stamped 2 Jul 1916 for conditional exemption due to his certified occupation with the Waterworks, where he had been employed since 1905. This is the supporting statement explains how the company had already parted with a large number of workers:

William and his wife had four children by the time he was called up in Feb 1917 (all girls). He started in the Suffolk Regiment, transferring later to 1st Beds Regiment, and was ill or wounded several times, including Trench Fever in Nov 1917 and a gun shot wound to the face in Oct 1918. William received leave to the UK between 15-28 Feb 1919 and was was finally demobilised on 28 Feb 1919. His leave was most likely due to the fact his youngest daughter had just died from Gastritis and Anaemia a few days earlier at age 3. William returned back to his home in Daws Heath, and the Electoral Register lists Henry and his wife at Rayleigh Road, Thundersley between 1921-22, then 3 Laws Cottages, Common Lane, Thundersley between 1923-24 and finally moving into Reservoir Cottage, The Common, Thundersley in mid 1924 after his parents moved out.

William and Rosa had three more children between 1920 and Feb 1927, then sadly William died at age 43 later that year. Rosa was left with six children aged between 19 and just a few weeks old to look after, and she swiftly remarried the following year to widower Thomas H JONES, a Brickworks Foreman 19 years her senior (Rosa moved out of Reservoir Cottage after her husband died, but remained in Thundersley). Rosa’s second husband died in 1947 aged 81, and she married for the third time the following year to another widower named Alfred COOPER-DYERSON. Alfred was 15 years her senior and only lasted until 1951 when he died aged 81. Rosa left it five years before remarrying for the forth and final time in 1956 to widower Edward PAMPLIN, a former Stevedore. Rosa and her forth husband were both in their 70’s when they married, and Edward died in 1962 aged 81, and Rosa died in 1967 aged 82.

ELIZA married in 1909 to a Well Worker named Theodore Mark BARKER and they had two daughters together. I’ve found not military records for him, and Theodore sadly died in 1930 age 43. In 1939 Eliza was living with her eldest daughter and family. She never remarried and died in 1969 aged 83.

HENRY enlisted as a Private into the Rifle Brigade (1st Battalion) on 25th Jan 1915, and was part of the British Expository Force leaving on 29th Jul 1915. In Jun 1916, Henry was presented with the Distinguished Conduct Medal and got a mention in the paper. A search of the London Gazette revealed what he had done to receive this award, just two months after embarking in France: 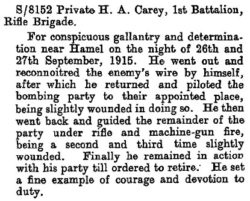 On 3rd Mar 1916 Henry transferring to the Royal Flying Corp. His RAF sheet gives his civilian occupation as “Wood Cutter”, and father George’s address rather strangely as “12 Canonsleigh Crescent, Leigh, Essex”. It also shows he received a gun shot wound to the hand and chest 29th Sep 1915. Henry was in France for almost a year, between 24th Aug 1916 – 24th Jul 1917, and then embarked to the Middle East on 10th Dec 1917. He was finally demobilised on 30th Apr 1920 as a Sergeant (receiving the 1914-15 Star, British War Medal and Victory Medal).

Henry was registered to vote from Reservoir Cottage between 1918-1919, and married Daisy Lillian ALDERTON on 23 Apr 1919. Their first child died shortly after her birth in 1920, and had two more children before Daisy died in 1933 age 41 (their children were 8 and 2 at the time). Henry swiftly remarried the following year to Mary R CHALLIS and had two more children. In 1939 they were all living in Southend and Henry’s occupation was listed as Water Waste Inspector. Tragedy struck again in 1942 when his second wife died aged 39 (the children being 13, 11, 6 and just turned 5). I don’t think Henry married for a third time, and he died in 1973 aged 85.

George Edward CAREY was born 27th Dec 1857 in Eastwood, Essex and was the first of ten children born to James CAREY (an Agricultural Labourer) and Harriet DIGBY. They were married very shortly before George was born, and of their ten children, three died in infancy.

In 1881 the family were living on Hart Road in Thundersley, then in 1885 James sadly died aged 50 (his own father had died at age 43). Harriet swiftly remarried the following year to Philip WEST, but the marriage didn’t last long as Harriet herself died about six months later in 1887 aged 47. Her youngest child (also called Harriet) was just nine when she was orphaned, and looks to have been taken in by her older sister Frances, whom she was living with in 1891.

Sarah BALDWIN, was born 23rd May 1861 in Hadleigh, Essex. She was the third of seven children born to John BALDWIN and Susan GOOD. John was an Agricultural Labourer and married Susan 16th Oct 1855. They started their family in South Ockenden but lost their first child in infancy. They then moved to Hadleigh and finally Thundersely. 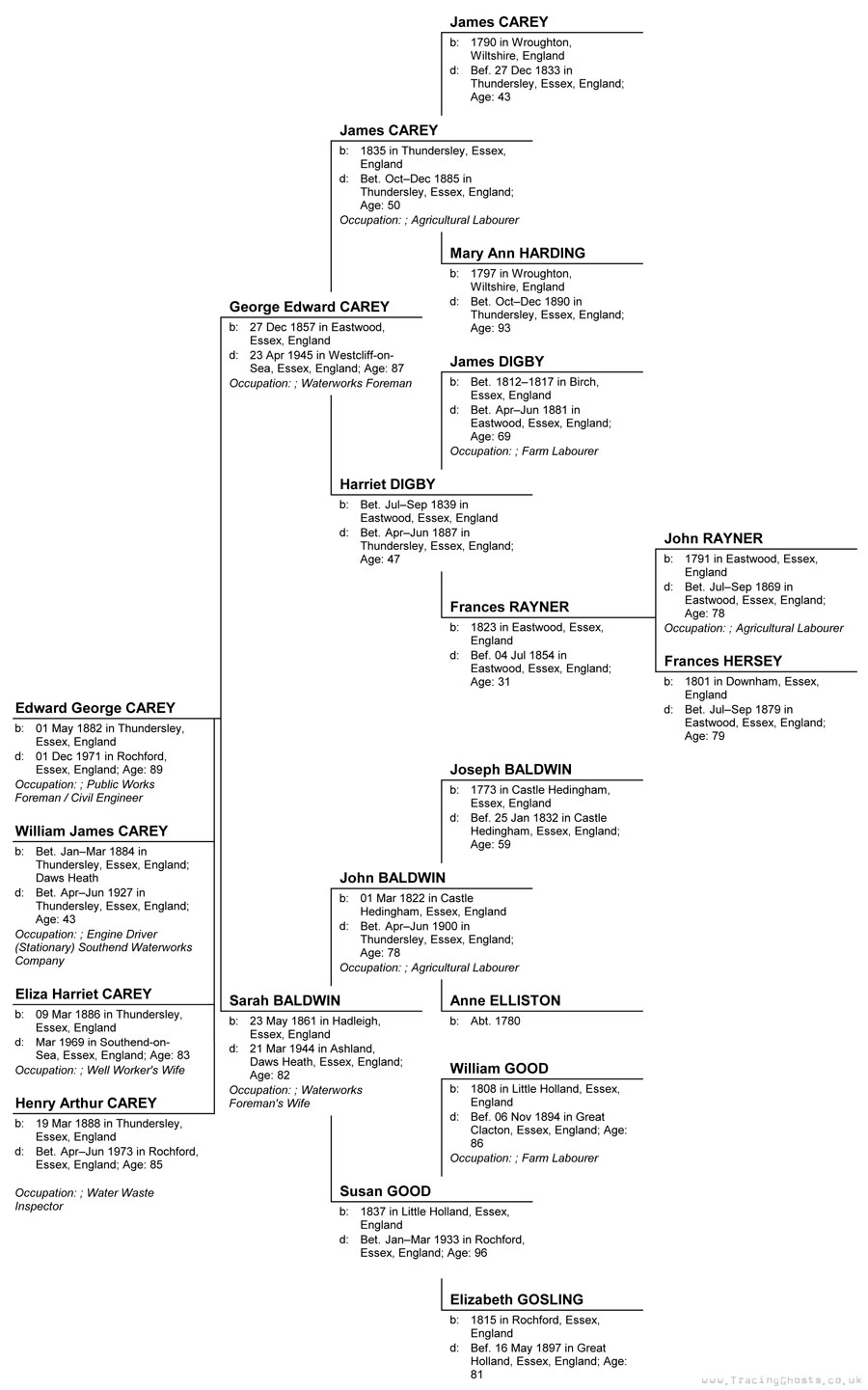