Fountain Benjamin LEDGER a former London Fireman and family were most likely the second residents of Burches Pumping Station House, following on from the previous occupants Alfred BARDELL and family in 1920.

Fountain Benjamin LEDGER married Eliza BIGWOOD on 23rd Sep 1906 in Woodham Ferrers, Essex (where her parents had moved to) and had two children. Fountain’s mother and Eliza’s father were siblings, making them first cousins.

Fountain was a Sub Officer with the London Fire Brigade when he married Eliza. I’ve not found him in the 1901 Census (age 24), but just prior to marrying was living at Bishopsgate Fire Station. Between 1907-10 the family were living at Plumstead Fire Station, and then Tooting Fire Station between 1911-1914. The family continued to live in London during WW1, although I don’t know where, and by 1918 the family were back at Plumstead Fire Station. Fountain was awarded an MBE in 1920 for “conspicuous courage and devotion to duty in the rescue of persons from buildings wrecked by hostile aircraft” caused by Zeppelin attacks on the city during World War One.

The family moved from London to Rawreth, Essex in 1919, then to Pumping Station House on Great Burches Lane in Thundersley in 1920 where they remained until 1923. I don’t know what work Fountain was doing during this time. The family then moved from Essex to Berkshire and ran the Bee Hive Tavern on Stert Street in Abingdon between 1923-1933 (possibly up to 1936). Fountain’s maternal grandmother (who was also Eliza’s paternal grandmother as they were cousins) Augusta STEVENS wife of John BIGWOOD (a Stone Mason) was also a Beer Seller, running the India Arms in Gravesend, Kent until her death in 1883. Fountain and Eliza’s daughter Gladys married in 1933 and remained in Abingdon and the rest of the family moved to Hounslow, London in 1936. The 1939 Register records Fountain now working as a Night Watchman (age 63), and the following year their son Stanley married. Fountain and Eliza lived in the same house up to 1947 when Fountain died age 70. Eliza died in Hastings, Sussex in 1971 age 90.

Fountain Benjamin LEDGER was born 20th Nov 1876 and the first of fourteen children born to Benjamin LEDGER (a Bricklayer) and Elizabeth Augusta BIGWOOD (a Laundress). Benjamin and Elizabeth married 1st Aug 1875 in Hammersmith, and lived in Mortlake, London (formally Surrey) where all their children were born. They lost five of their children between aged under 1 year (the youngest to die was only 12 day s old and buried with no service).

Eliza BIGWOOD was born 10th April 1880 and the second of four children born to Fountain BIGWOOD (a London Railway Guard) and Ellen GRIFFIN (daughter of a Tinman & Brazier). Fountain and Ellen married 23rd Dec 1877 and lived in various places around London until they moved to South Woodham Ferrers, Essex c.1905. Fountain retired from the London Railway and began cultivation a 1 acre plot of land.

In 1918 he took his neighbour Alice ANDERSON and two of her sons to court in Chelmsford for assault and threats after their donkey got onto his land and they took offence at his complaint (defendants were bound over). In 1924 he was in court again, having received threats from another neighbour over land by Frederick John JAMES an army pensioner (case dismissed), and for a third time in 1932 accusing a farmer called Ralph BURCHELL of assault after his cows got into Fountain’s garden for the second time (case also dismissed). 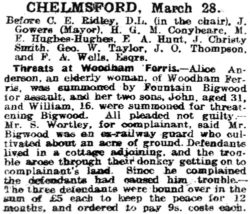 A year after the excitement of the escaping cows case, Fountain’s wife Ellen died in aged 78 having been ill for about 6 months. On the Saturday morning of 23rd Oct 1937, a neighbour noted there was no smoke coming from Fountain’s chimney. Worried, Mrs Mabel JAMES went into his house but he was not to be found. However, on entering the garden she discovered Fountain lying dead on the ground next to his shed with a gun between his legs and a gunshot wound to his face. He was 84 years old. 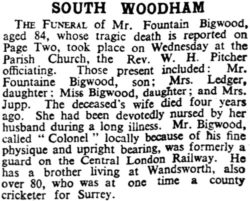