Aldred Arthur THURSTON an Engineer and family were most likely the third residents of Burches Pumping Station House, following on from the previous occupants Fountain Benjamin LEDGER and family in 1923.

Aldred Arthur THURSTON married Mahala Agnes Mary DUNNETT in 1919 in Suffolk and had four children. Their first child was born in Suffolk, the next two in Thundersley, Essex and the last in Sussex.

Aldred was 20 when war broke out in 1914, and enlisted as a Private into the 4th Suffolk Regiment four weeks later on 29th Aug 1914 along with his brother Cyril who was 19. Both Aldred and his brother worked for Richard Garrett & Sons, manufacturer of agricultural machinery, steam engines and trolleybuses based in Leiston, Suffolk (Aldred as an Engineer and Cyril as a Clerk). Aldred served in France and Belgium between 4th Nov 1914 and 30th Mar 1916 as a Scout and Signaller, and in Feb 1916 was injured by a shell which damaged his left eye. On returning to England after his injury he was transferred to working Reserve and returned to Richard Garrett & Sons from Apr 2016. He was discharged on 14th Dec 1918 and married Mahala the following year.

The electoral register records Aldred and Mahala living at “Pumping Station, Great Burches Road, Thundersley, Essex” between 1924-1926, after which they moved to Sussex. The family were living at Shoreham-By-Sea, Sussex when the 1939 register was taken, where Aldred was still working as an Engineer (unfortunately no industry sector was noted). Aldred died only a few years later in 1947 age 53, and Mahala died in 1977 age 85.

Aldred Arthur THURSTON was born 21st Jan 1894 in Ipswich, Suffolk and was the first of four children born to Arthur Herbert THURSTON and Mahala Emma BIRCH. Arthur and Mahala married 11 Feb 1893 in Ipswich when they were both about 27. The name “Aldred” was Mahala’s mothers maiden name, who died four months after they married.

Arthur worked as a Clerk for many years, as had his father before him who had worked for the Abstract Office, Goods Station, Great Eastern Railway. In 1907 Arthur left the firm of Messrs R & W Paul’s Ltd grain merchants of Ipswich, whom he had worked for for 23 years. Mahala was a Dress Maker. The family then moved from Ipswich to Leiston near the coast about 30 miles away, where in 1911 Albert was working as an Engineer’s Clerk (most likely for Richard Garrett & Sons like his sons Aldred and Cyril). 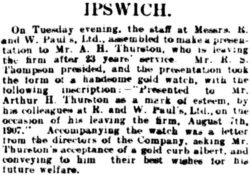 Whilst both Aldred and his brother Cyril enlisted into the 4th Suffolk Regiment in 1914 shortly after war broke out, 17 year old Alan enlisted into the Royal Navy. Aldred received damage to his left eye and Cyril suffered frost bite to his left foot, but the three brothers all survived the war and each received the 1914 Star, British War Medal and Victory Medal.

Arthur became a local councillor for Leiston fairy swiftly after moving, and a newspaper report from 1921 noted his occupation as “Welfare Superintendent“. Mahala died in 1930 aged 64, and by the time the 1939 register was take Arthur, now aged 74, was working as “Director Printing Works & Publisher Local _” and in the notes to the right “Chief Special Constabulary _“. In both cases the writing is cut off in the image. All four of Arthur and Mahala’s children were married by this time, although only Aldred and Cyril had children of their own. Arthur died in 1957 in Middlesex at the grand old age of 91.

A few interesting notes about Aldred’s maternal BIRCH family, include his grandfather Walter BIRCH who was an Iron Moulder and Inn Keeper in Ipswich, and great grandfather Robert BIRCH who was a campanologist and scientific change-ringer for 60 years for the St Mary Tower Company in Ipswich.

Mahala Agnes Mary DUNNETT was born 7th Sep 1892 in Holbrook, Suffolk and the first of four children born to Charles DUNNETT and Agnes CRANE. Charles and Agnes married in 1889 when they were age about 27 and 32.

Charles followed in his own fathers footsteps (as did his brothers) and worked as a Bricklayer and Builder with his own account. Previous to marrying, Agnes had worked as a General Servant, and her father was an Agricultural Labourer and Farm Steward.

When war broke out in 1914, James and Hubert both enlisted (I’ve not found a record for Albert). James joined the Middlesex Regiment and Hubert joined the Royal Navy. Charles died in 1921 aged 59, just two months after Mahala and Aldred had their first child. Agnes died in 1930 aged 73 around the same time Mahala and Aldred had their forth and last child.