Robert William NOAKES a General Foreman was most likely the third resident of Reservoir Cottage, moving in after the previous occupants moved out in 1930 (George William SHRIMPLIN and family). By 1939 the section of road containing Reservoir Cottage up to Great Burches Road had changed name from “The Common” to “Common Approach“, and the property was now known as “Waterworks House“.

Robert William NOAKES was born 8th Dec 1881 and was the sixth of eleven children born to Thomas James NOAKES and Esther STRUTT. The Noakes’ were an old Leigh-On-Sea family, and Thomas was a Fisherman, as was his father and his father before him. It seems the trade didn’t continue with Robert and his brothers though.

Thomas married Esther on Christmas Eve of 1871 in St Clements, Leigh-On-Sea and had a child every one to two years until 1891 (and didn’t loose any in childhood).

Robert married Ethel BREED 10th Jun 1905 in Chelmsford (where Ethel was from), and they had one son born in 1908 (Robert Ronald NOAKES). Ethel was born to unmarried mother Elizabeth BREED, and her grandfather was a Carpenter and Joiner Journeyman (Ethel’s mother married Henry John LOVE when she was four and had three more children). In 1911 the family were living at 2 Station Avenue in Prittlewell, Essex and Robert was working as a Sewage Labourer, presumably for Southend Waterworks.

By 1928 the family were living in Thundersely, according to a newspaper report regarding Robert’s 19 year old son’s involvement in a traffic accident. Note how the reporter got his name wrong, exchanging his surname for part of his address, and even misspelling it (there is no such person as “Robert Birches”, nor have I been able to find “Miss Ann Hillman”).

Electoral records show Robert at Burches Cottage, Burches Road, Thundersley between 1929-31, which was presumably the same place as 1928. By 1939, Robert had moved from the Pumping Station cottage to the Reservoir cottage around the corner. He was married but living alone at Waterworks House, Common Approach, Thundersley and working as a General Foreman (Heavy Works). Ethel doesn’t show up in any Electoral Rolls, but in the 1939 Register was recorded as a patient at Runwell Hospital, which looked after patients with various mental health problems. Their son (now married) was working for Southend Waterworks as a Labourer and Engine Driver (Pump).

Robert died in 1956 age 74 at the General Hospital in Rochford, prior to this he had been living at “Aida”, Common Approach, Thundersley. His probate records states his son was now working as a Fitters Mate. Ethel died at Runwell Hospital in 1967 age 88, somewhere she must have lived for many years.

It is interesting to note that the Alfred Charles NOAKES who lived at Pumping Station Cottage in Thundersley up to 1924 is from a completely different line of NOAKES, which came from High Ongar. 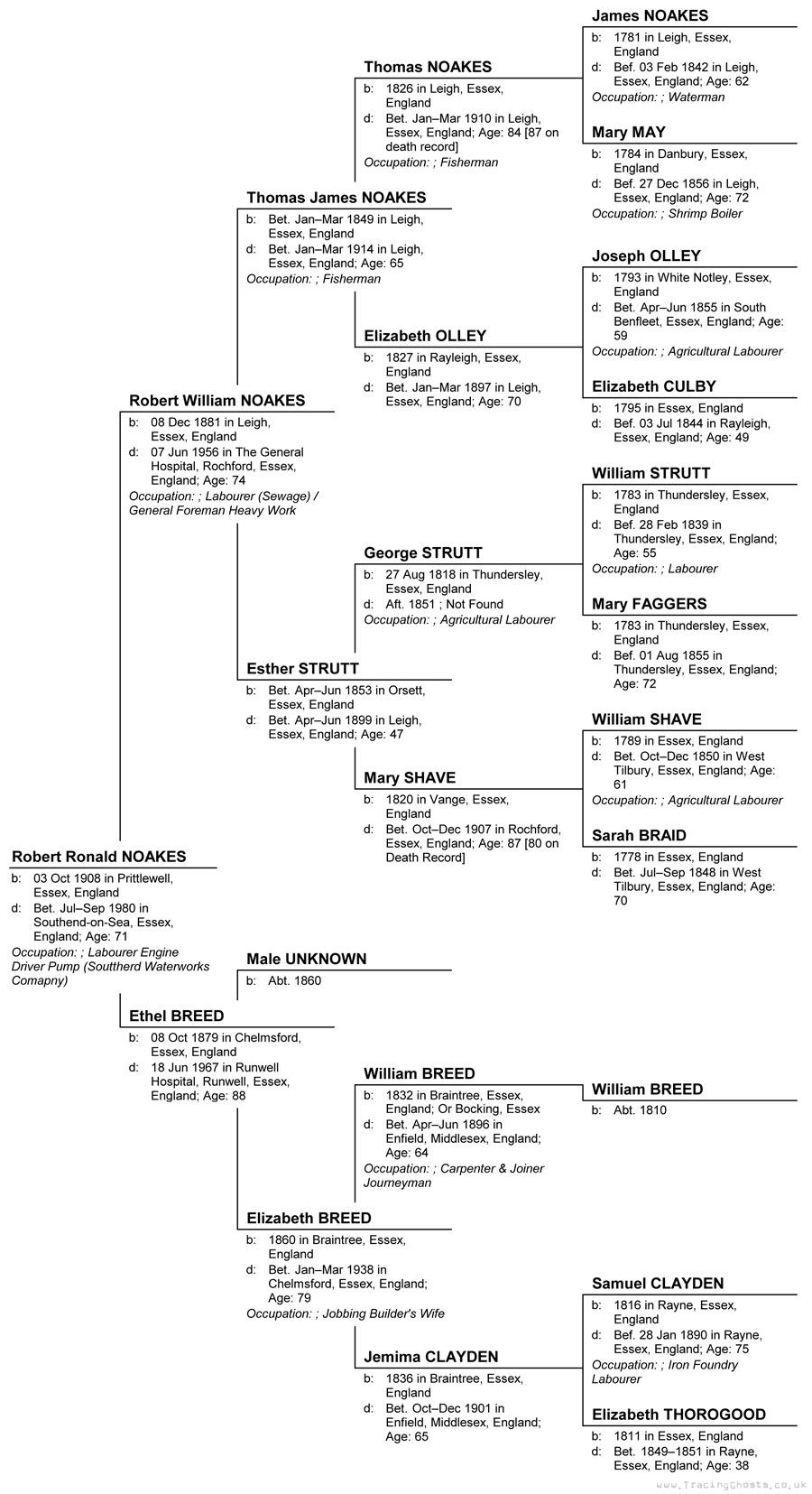