My second great grandmother Eliza KEECH was born 3rd Feb 1852 in Turvey, Bedfordshire and was the first of six children born to James William KEECH, a tailor, and Johanna COTTON, a lace maker. 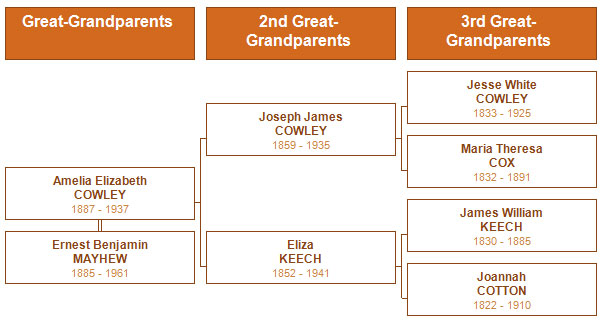 Joseph married Eliza on 6th May 1881 at St Paul’s Church in Bedford when they were 22 and 29. They had six children, of which my great grandmother Millie (Amelia) was the second (possibly third). In the 1911, Eliza states to have given birth to six children, of which five were still living. I have been unable to find any record of this child, who was quite possibly born around 1885. Could the baby have been born and died with no record ever recorded (birth, baptism, death or burial)? I also checked for births before they married under “Keech”, but found no possibilities.

Prior to marriage, Eliza worked as a general domestic servant and nurse. Joseph worked as a coachman & groom for Captain William Pritzler NEWLAND at Kempston House in Green End (near Kempston), Bedfordshire, and the family lived in the Coachman’s Cottages situated there from at least 1901. Both their sons also worked as grooms. Captain Newland died in 1900, but Joseph continued working for his widow and possibly up until she died in 1927 and the estate was sold.

I’m unsure if son William enlisted during WWI but Samuel joined the Bedfordshire Yeomanry at age 24 (unmarried) on 9th Aug 1914, just 12 days after war was declared. He was sent to France ten months later and at the beginning of Sep 1916 suffered a serious injury to his left hip after being thrown from his horse. He was sent back to England on 25th Sep 1916 and admitted into The Lord Derby War Hospital in Warrington, where he remained for a little over a year before a brief eight week stay at the 1st Eastern General Hospital in Cambridge. Samuel’s medical papers simply stated his case as “arthritis of left hip” and “tuberculated left hip”, which left him unable to look after himself. I’m unsure where he lived after his discharge from the army and hospital on 30th Nov 1917 as his records don’t include this information, but Samuel very sadly died from the injuries sustained during the war on 19th Sep 1919 at Bedfordshire County Hospital. His death certificate stated his cause of death as “Chronic Osteomyelitio of Femur 3y and Septic Arthritis of Hip Joints”.

By 1920 all four remaining children had married. William moved up the country to Alnwick, Northumberland whilst the rest remained in Bedfordshire, and by 1927 Joseph and Eliza had eight grandchildren.

Joseph and Eliza continued to live at Green End until 1935 when Joseph died, which occurred on 23rd Aug 1935 aged 76 at daughter Millie’s house due to heart failure (at Church Road, Biddenham, Bedfordshire where Millie died herself just two years later). His death notice described Joseph as a “very well know figure”. Eliza moved in with her youngest daughter Beatrice (at Grange Stables, Bedford Road, Kempston), and died a few year later on 21st Apr 1941 aged 89 at daughter Lilian’s house (at Home Park Cottage, Station Road, Abbots Langley, Hertfordshire) after being in a prolonged coma. 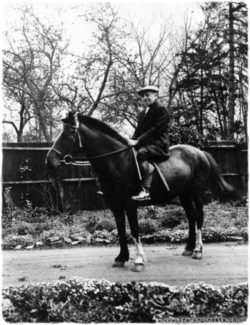 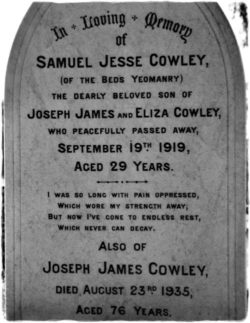