My 3rd great grandfather John MAYHEW was born in 1824 in Bromham, Bedfordshire and was the second of five children born to John MAYHEW Snr., an agricultural labourer, and Sarah HARRISON. John Jnr. was 11 years old when his mother died, and his father remarried five months later to Sarah TAYLOR giving John eight half-siblings (he was 31 years older than his youngest half-sister).

My 3rd great grandmother Louisa BARKER1 was born 2nd May 1830 in Kempston, Bedfordshire and was the eighth of nine children born to  John BARKER1, an agricultural labourer, and Mary ALLEN, a lace maker. I have two direct lines of Barkers on this side of my family which are unrelated (as far as I have been able to research). 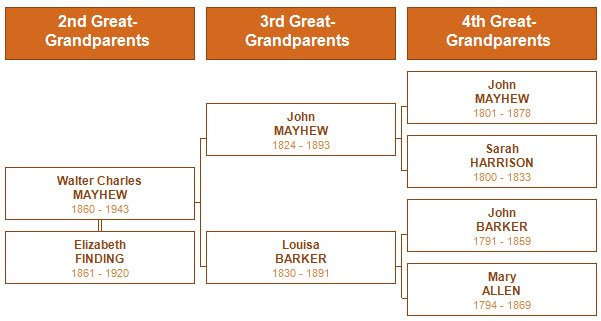 John married  Louisa on 2nd Sep 1849 in Kempston, Bedfordshire when they were 25 and 19. They had eight children together between 1850-1873 and all children went on to marry and have children of their own (at least 46 grandchildren).

Louisa died at home on Christmas day 1891 aged 61 from heart disease with daughter Emma Julia present (Joyce’s Yard, High Street, Kempston, Bedfordshire). John died on 11th Apr 1893 aged 69 at the Bedford Union Workhouse after 6 day of bronchitis. He was in the workhouse two years previous during the 1891 census, so may have been ill on and off for quite a while. The workhouse was the only place to get free medical care for those with little to no money, and as Louisa was living at the family home in the 1891 census suspect this may have been the reason why he was there.