My 2nd great grandfather Walter Charles MAYHEW was born 6th Oct 1860 in Kempston, Bedfordshire and was the fifth of nine children born to John MAYHEW, an agricultural labourer, and Louisa BARKER1, a lace maker.

My 2nd great grandmother Elizabeth FINDING was born 19th Jun 1861 in Marston Moretain, Bedfordshire and was the sixth of nine children born to Ebenezer FINDING, an agricultural labourer, and Eliza BARKER2, a lace maker. 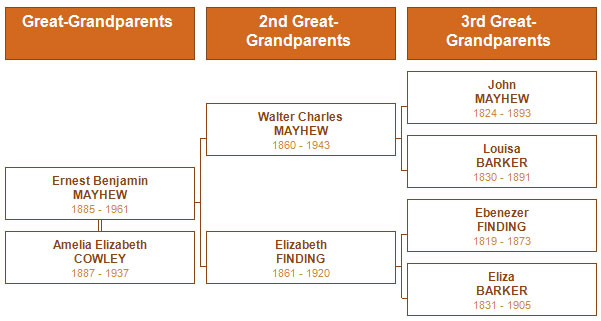 Walter married Elizabeth on 12th Oct 1881 when they were age 21 and 20, Elizabeth being about seven months pregnant at the time. They had eleven children together between 1881-1906, my great grandfather Ernest being their third in 1885. Sadly, four of their children died in infancy or childhood.

Walter worked as a general labourer and gravel digger, and Elizabeth was a lace maker like both her mother and mother-in-law. All three of their surviving sons enlisted into the army during WWI. Walter Jnr joined up in 1915 age 32 and was transferred a few times before being discharged due to health reasons in 1917 (he never saw active duty abroad). My great grandfather Ernest joined the Royal Army Service Corps (date unknown) and received the Victory and British War medals. Frank enlisted towards the end of the war age 18, as a Private in the Queen’s (Royal West Surrey Regiment) 11th Btn. He was killed in action on 3rd Oct 1918 in Belgium and is commemorated in Tyne Cot Cemetery.

Elizabeth at home died from a stroke in King Street, Kempston, Bedfordshire on 7th July 1920 age 59 with her husband present. By 1926 all surviving children had married and by 1929 there were twenty grandchildren born.

Walter died at home due to senility on 13th Nov 1943 aged 83 with his youngest daughter Evelyn present. Evelyn and her own family lived with her parents until their deaths, and continued to live in the same house until her own death in 1977.