My 3rd great grandfather Ebenezer FINDING was born about 1819 in Houghton Conquest, Bedfordshire and was one of two known children born to James FINDING, an agricultural labourer, and Elizabeth AYRES. His surname of “Finding” was also spelt “Finden” on some records.

My 3rd great grandmother Eliza BARKER2 was born 1831 in Marston Moretain, Bedfordshire and was the first of seven children born to Charles BARKER2, an agricultural labourer, and Elizabeth Martha GILLET, a lace maker. 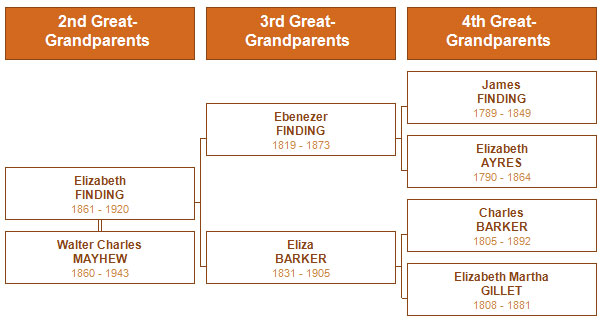 Ebenezer and Eliza married 14th Sep 1852 in Marston Moretain when they were about 33 and 21, and had nine children together between 1852-1870. Their first child was baptised on 4th Oct 1852, so looks like Eliza was very pregnant when they married! All children were born and baptised in Marston Moretain, and the records also state the family was living there each time, and the 1861 and 1871 censuses pinpoint the family to the hamlet of Upper Shelton close by. My 2nd great grandmother Elizabeth was their sixth child.

Ebenezer died 22nd Jan 1873 aged 54 at the Union Workhouse in Ampthill, Bedfordshire from abdominal cancer, leaving Eliza with nine children aged between 2 and 20 to look after. Eldest daughter Emma (unmarried) had her own young daughter to look after too.

Two years after Ebenezer’s death Eliza had a tenth child. Susan is listed as Eliza’s daughter in 1881 and baptised along with her half brother John in 1878 (John was seven). There are no original images to view, but Johns record has Ebenezer Finding as his father and Susan has John Finding has her father. It’s hard to say without seeing the original image what is going on here.

I’ve not been able to trace two of Ebenezer and Eliza’s children after childhood, but by 1894 six of them were married and their youngest son John was now a soldier in the Bedfordshire Regiment. John enlisted in 1889 briefly then again in 1890. He served in East India between 1892 and 1898, then South Africa from 1899 until 1902 and was shortly after discharged after 12 years service. He was awarded the India Medal and clasps for Relief of Chitral in 1895, Queens & Kings Clasps for Cape Colony Orange Free State in 1901 and Transvaal in 1902. I’ve not discovered his fate after this point.

Eliza continued to live in Upper Shelton near Marson Moritain until her death on 18th Apr 1905. She was 74 years old, but recorded as 77 on her death certificate. Her cause of death was “Morbus Cordis, Syncope”, and daughter Sarah was present. 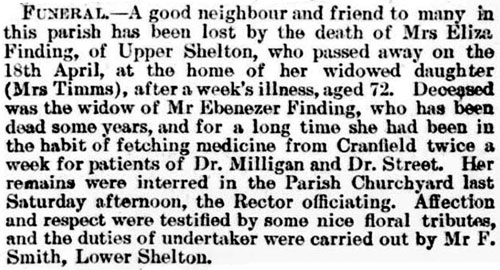