The St James The Less church WWI plaque lists J A Arnold as having died in 1918, and the memorial plaque names him as John A Arnold.

John Albert Arnold was born 5th March 1899 in Islington, London to Francis Calder Mander Arnold and Sarah Hooker. He was one of four children from his mothers first marriage (1889 in Clerkenwell, Middlesex), with a further brother from her second marriage to Charles Clarke (1905 in Leytonstone, Essex). This was also Charles’s second marriage, who had seven children with his first wife (the youngest three died in infancy, the last one just after remarrying). It is interesting to note that the Arnold family and Clarke family were next door neighbours in 1891.

John’s father Francis was a stick mounter (he decorated walking sticks), born 1870 in Birmingham, Warwickshire, and his mother Sarah was born 1871 in  Islington, Middlesex. They had four children before Francis died in 1902.

Their father Francis died in 1902 aged 31, and Sarah remarried to their former next door neighbour Charles Clarke in 1905. Charles was a Firewood Dealer, born 1863 in Shoreditch, Middlesex. They had one child together after moving to Essex.

At some point between 1911-15 the family moved from Thundersley to Hadleigh, to 4 The Broadway. On 20th Feb 1915, 15 year old John travelled into Southend-On-Sea to enlist in the Royal Field Artillery. He gave his age as “18y 11m”, birth place “Bow, London”, and occupation “Porter”. His mother “Sarah Clark” is listed as his next of kin. He was promptly discharged 21 days later on 12th March “having made a mis-statement as to age on enlistment”, just after his 16th birthday.

Five weeks later he enlisted again, this time from London into the Duke of Cornwall’s Light Infantry as a Private. He gives his age as “19y 1m”, birth place “Bow, London”, and occupation “Sawyer”. His residence was “3 Driffield Road”, which was his older brother Francis address in Bow (a wood sawyer at this time).

This time he made it 194 days before being discharged on 30th Oct 1915 for “being under 17 years of age at the date of application”. His age at discharge was recorded as 16y 6m. This time he saw action, and was part of the British Expeditionary Force in France from 20th Aug to 5th Oct. He was awarded the 1914-15 Star, British War Medal & Victory Medal for his service.

He moved back to Hadleigh after his discharge, the in Nov 1917 John enlisted again in Stratford, London, using the name “John Albert Clarke” with residence “Ilford, Essex”. Between 7th-10th April 1918 he was a Private in 21st (City of London) Battalion: London Regiment SN 656179. He was transferred to the 7th Londoners (SN 368003) on the 11th, and became part of the battle at Villers-Bretonneux. The 7th Londoners were witness the first tank versus tank action in history on 18th April, and lost many men to shell fire and gas attack. Villers-Bretonneux was cleared of enemy troops on 25 April, but the following day on 26th April 1918 John died from wounds. He was awarded to British War Medal and Victory Medal for the second time. His mother Sarah received his pay.

I’m not sure when John’s mother and step father died. All his siblings married and had children.

John’s mother, Sarah Ann Jane HOOKER, was the forth of eight children born in Islington, London to parents Charles Archibald HOOKER (a Fire Wood Cutter) and Sarah Ann COMPTON. Charles was previously married to Sarah Ann HUBBUCKS in 1856 but I have found no death for her, nor a marriage record for him to Sarah Compton. It’s possible that his first wife was related to his second wife through the Hubbucks line (and that they weren’t actually married).

John’s paternal grandfather, Francis ARNOLD, was the first of three children born in St Pancras, London to George ARNOLD and Catherine Ann CALDER. George was a Warehouseman for a cabinet and general house furnishing company and born in Essex, whilst Catherine was born in Scotland. Of the three children, only their daughter lived with them. Francis was brought up by his aunt and uncle (his mother’s sister), Francis Brookes MANDER and Margaret CALDER. This explains why he named his son (John’s father) Francis Calder Mander Arnold. His uncle Francis was a Bailiff Farmer, and also a Chelsea Pensioner. He’d been a Sergeant with the Royal Regiment Of Artillery (Second Battalion) between 1815-1836.
John’s paternal grandmother, Rachel WOODMAN, was the forth of twelve children to parents John WOODMAN (a Journeyman Wire Worker) and Herodias BLENKIN. Their first child died at age 17, and the next two in infancy. After Rachel was born they lost five more children in infancy followed by two more who survived. Eight years later Herodias had another child, but sadly she either died in childbirth or very shortly afterwards, followed by John seven years later. Rachel looked after her youngest sister from the time their mother died.

John’s maternal grandfather, Charles Archibald HOOKER, was the sixth of eight children born in (or near) Hackney, London to parents Joseph William HOOKER (a Cabinet Maker) and Mary Ann MALCOM. Joseph died in 1843, two years after the birth of their last child. Mary remarried in 1850 to Samuel AUSTIN. Samuel, a Shoe Maker, was twenty years her senior. They had one child together, but I don’t think she survived childhood.
John’s maternal grandmother, Sarah Ann COMPTON, was the first of nine children born to parents James COMPTON (a Wood Sawyer) and Sophia HUBBUCKS. Both James and Sophia were born in Buckinghamshire, their first child (Sarah) was born in Berkshire, and the rest in Paddington and Islington, London. Sophia died in 1869, and I suspect James also died before the 1871 census as one of the younger children was living with his sister Sarah (John’s grandmother) and her family in 1871. 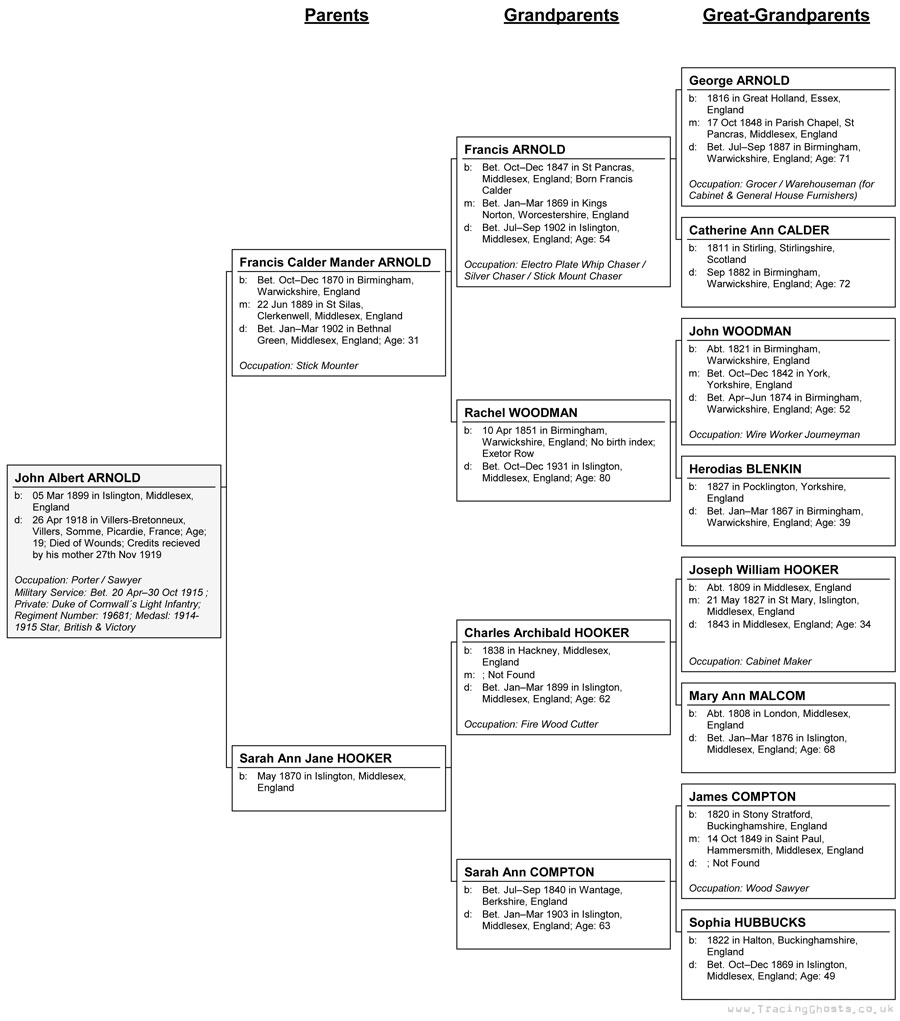 When John first enlisted (underage) into the army in 1915 he was living at 4 The Broadway, Hadleigh, Essex with his mother and step father, who were still living there in 1926. This is why his name appears on the Hadleigh War Memorial.