The St James The Less church WWI plaque lists F Carter as having died in 1916, and the memorial plaque names him as Frederick Carter.

Frederick CARTER was born late March 1900 (exact date unknown, but after the 21st) in either Westcliff-On-Sea or Southchurch in Essex and was the seventh of eight children born to parents Edward CARTER, a bricklayer born 1867 in East Woodhay, Hampshire, and Annie Eliza CARTER nee PULLEN born 1867 in Stoke Poges, Buckinghamshire. Edward and Annie married in 1887 in Stoke Poges and moved around quite a bit.

In 1901, the family were living at 3 Fernbrook Avenue, Southchurch, Essex except for their daughter Daisy, who was living with her paternal grandparent in Stoke Poges (where she remained until her marriage in 1919). Frederick was “age 1”, born “Westcliff-On-Sea”. Edward’s brother James had also moved to Essex about the same time and was living in the Southend-On-Sea area working as a builder.

By 1911 the family was divided. Their mother Annie had died in 1909 and their father Edward and eldest son William are nowhere to be found. Daisy was still living with her paternal grandmother Eliza and aunt Kate in Stoke Poges, age 22 and working as a domestic housemaid. Eliza specified she had given birth to seven children, one of which had died. I have identified which of Eliza’s children died before 1911 and it wasn’t Edward. Charles was boarding in Prittlewell (aged 21), and working as a Bricklayer. I’ve not found Christie in 1911 who would have been 17, and Robert (at age 15) turned out to be in Canada. Bertie and Frederick were boarding together at Love Lane in Rayleigh, Essex (age 10 & 12) with a widow called Alice Gertrude Wilkinson and her 1 year old adopted son. Violet was also boarding; she was in Barling, Essex with George & Margaret Horner (aged 8, but recorded as 7), their three children and two more young boarders.

Frederick and Bertie moved from Rayleigh to Hadleigh between 1911-14, and were boarding together at “Ivydene”, Short Road, Hadleigh when the war broke out (aged about 14 & 16).

When Frederick enlisted on 21st Mar 1915 into the Rifle Brigade (Prince Consort’s Own) 10th Battalion he was living at Church Street, Hadleigh working as a Baker. He gave his age as 19 years, 0 months, but was actually only 14 (just about to turn 15) and 5 feet 2 inches tall. He lists his sister Daisy Carter as his next of kin.

On 24th Feb 1916 whilst stationed at Seaford, Frederick was reverted from Acting Corporal to Rifleman due to “tampering with and reading a comrades private correspondence”.

Frederick was posted to France on 23rd Mar 1916, so had either just turned 16 or was just about to. His casualty form shows he was admitted in the field with myalgia on 1st Aug and then influenza on 6th. He rejoined his battalion on the 19th Aug and died in action on 3rd Sep 1916 at Guillemont most likely during battle of the Somme. He was aged 16½, although the Essex Newsman incorrectly stated him to be a year younger than he was. His sister “Mrs Humphrey” (Daisy) is listed as his only blood relative on a document filled out at least three years after his death. Daisy was also sited as next of kin on their brother Robert’s military enlistment papers in 1915.

“Another Hadleigh soldier, Rifleman Fred. Carter, of the Rifle Brigade, has bee killed at the age of 15½ years. He enlisted shortly before his 14th birthday.”

Frederick was posthumously awarded the British Medal and Victory Medal but they were returned unclaimed in 1921 and the index card has a note to “request authority to dispose of medals“. There is a receipt signed by his sister dated 11th Nov 1920 amongst his military records, but it doesn’t say what for.

What happened to Frederick’s siblings?

Frederick’s father Edward John CARTER was born 1867 in East Woodhay, Hampshire and was the fifth of seven children born to Jeremiah CARTER and Eliza COPE (five of which were boys). Jeremiah worked as a Bricklayer, mostly in Stoke Poges, Buckinghamshire, although the family moved around a bit during the mid-1860’s into the 1870’s. Jeremiah’s father James CARTER (wife Catherine) was an agricultural labourer in Stoke Poges and Eliza’s father James COPE (wife Amelia GODLEY) was a farmer then licensed victualler in Portsmouth, Hampshire. In 1861 he was running The Highlander at 34 Oyster Street, and in 1871 the Shipping & Mercantile Tavern also on Oyster Street. 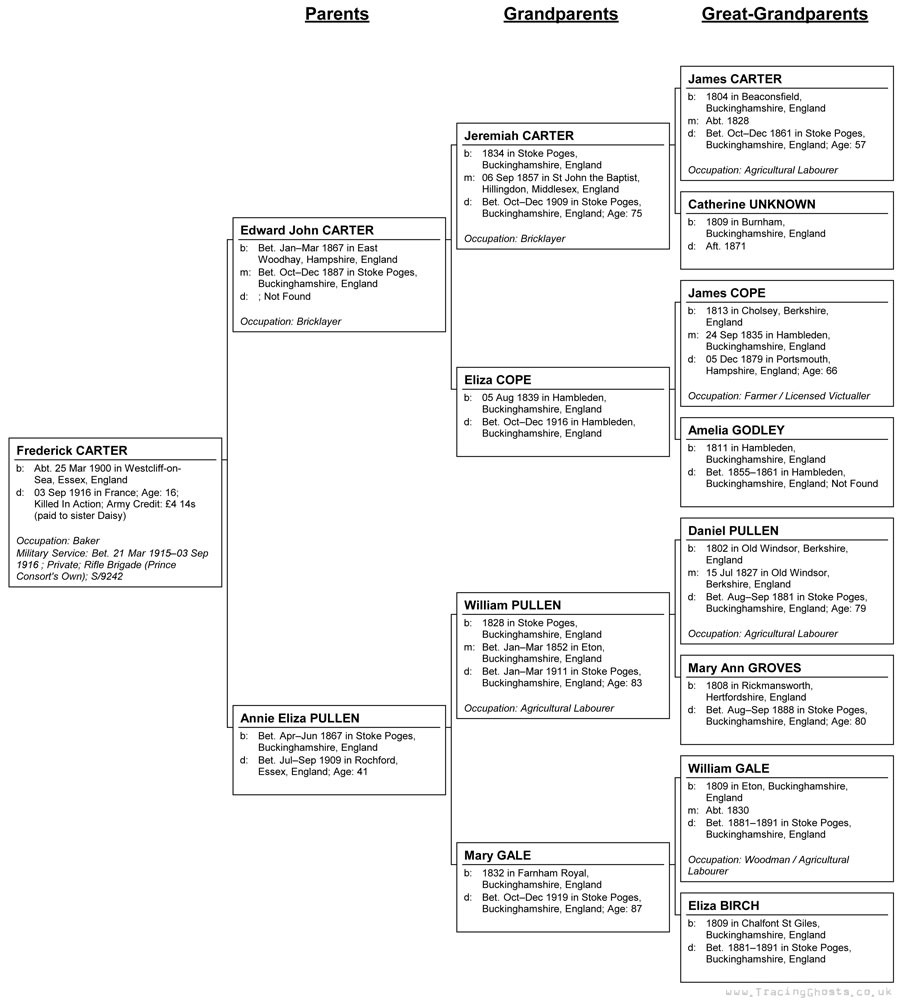 Frederick’s link to Hadleigh is that he was living there in 1914-1915 with is brother Bertie (both early to mid teens). His mother was already dead when Frederick was killed, and his father nowhere to be found. As his last place of residence before enlisting, and possibly his brother was still living there in 1917, this must be why Frederick is on the Hadleigh War Memorial.