The St James The Less church WWI plaque lists C C Collins as having died in 1916, and the memorial plaque names him as Charles C Collins. There are two Collins’ on the plaque, who are unrelated.

Charles Claude COLLINS was born in Ipswich, Suffolk on 10th June 1880 to parents Frederick Adolphus COLLINS and Emma Jane FLOWER, and was one of nine children (one died as a baby). His father was a Bookbinder & Gilder and the family lived in Ipswich all their lives.

Their mother Emma died in 1893 aged 37, leaving Frederick with eight children between the ages of 17 and 3 to look after. He did what most widowers in this situation did, and that was to swiftly remarry. Frederick married again the following year to Florence MOSS, a spinster tailoress who lived just a few doors down from the family. They didn’t have any children of their own. Frederick died in 1912 at age 60, and Florence in 1927 aged 70.

In 1901, Charles age 20 was still living at home and working as a postman. Two years later he married Alice Maud Finch in Ipswich (1903) and they had three children between 1904-07 (the first of which died as a baby). In 1911, Charles was working as a cook in the St Giles Christian Mission Boys Home in London. His wife and two sons were visiting a couple in Clapham (Alice was about 7 months pregnant at the time with their forth child). Her occupation was noted as “private means”.

On 2nd June 1915 at age 34, Charles enlisted as a Private into 3rd (City of London) Battalion, London Regiment (Royal Fusiliers), Territorial Force. He gave his address as 87 Cooks Road, Kennington Park, London. He was discharged after only 5 months of home service on 12th Nov 1915 due to ill health as the “result of ordinary military service due to exposure” and gave his gave his address as 11 Doddington Grove, Kennington, Surrey and his trade as cook (he had been transferred in the 4th by this time). Charles moved to Hadleigh, Essex at some point during 1916 where he died later that year on 5th Dec 1916 from “phthisis” (aka tuberculosis). His funeral notice shows he was of Sydney Cottage, Church Road, Hadleigh and took place in the parish church, although I have yet to find his grave stone in the churchyard, which is not a war grave.

Charles’s pension card shows his widow’s address was 60 Queens Street, Walton, Suffolk (her parents address), so had presumably moved back to her parents home after her husband died (there is no evidence that she and their children ever moved to Hadleigh, but this does not mean this wasn’t the case). Their children were aged 10, 9 and 5. Alice remarried in 1920 to the very recently widowed James HORSNELL (a Blacksmith, 30 years her senior), but had already had one child with him whilst his first wife was still alive in May 1919. They had one more child in 1921 and lived in Hatfield Broad Oak, Essex (no where near Hadleigh). Alice died in 1964 in Suffolk aged 83 (her second husband had died some years previous in 1934 age 75).

What of Charles’s eight siblings?

Charles’s father Frederick Adolphus COLLINS was the last of five children born to George COLLINS, a Basket Maker (as was his father), and Susannah SMITH. His siblings were called William George, George William, Flora Susannah and Susannah Flora. No doubt if there had been another boy born, he would have been called Adolphus Frederick!

Charles’s mother Emma Jane FLOWER (aka FLOWERS) was the third of six children born to William FLOWER, a Brewer and Labourer, and Harriet NOBLE. Both William and Harriet’s fathers worked as Agricultural Labourers in Suffolk. William died in 1872 aged 48 and Harriet remarried two years later to widower David BOSTON (11 years her junior), who then died in 1884. In 1891 Harriet was working as a Nurse in Hammersmith, but I loose track of her after this. 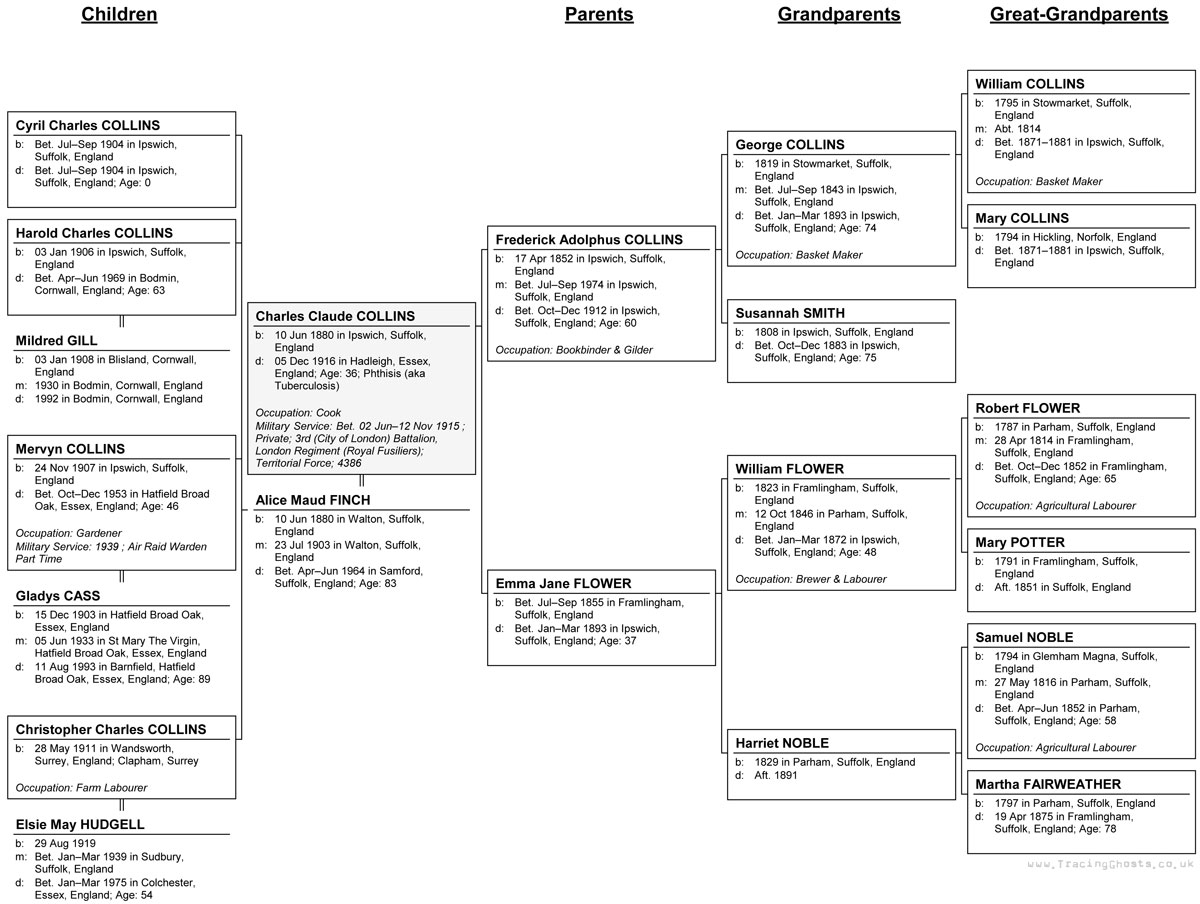 Charles was discharged from the army in Nov 1915 due to ill health, and moved to Hadleigh during 1916 where he died in the December. This explains why his name is on the Hadleigh War Memorial.