The St James The Less church WWI plaque lists R FEAKIN as having died in 1916, and the memorial plaque names him as Robert FEAKIN. In all other instances, his surname is spelt FEAKINS.

Robert James FEAKINS was born Apr-May 1897 in Hadleigh, Essex and baptised 6th Jun 1897 at St James The Less, Hadleigh. He was the second of two children born to Samuel James FEAKINS, a general labourer, and Eliza Minnie CHAMPION.

Samuel and Eliza married 19th Jun 1893 in Folkestone, Kent age 19 and 25. Their first child was born the following year in Battersea, Surrey, then the family moved to Hadleigh, Essex where Robert was born in 1897.

In mid 1912, Robert’s sister Emma married Harry James Henry Payne HAVIS. They had their first child in the October and a second just after war was declared in 1914.

Robert was just 17 when he enlisted underage into the 2/6th Essex Regiment in Nov 1914. His father Samuel also enlisted in 1914, into the 3rd Essex Regiment, and embarked for France on 30th May 1915 where he was transferred to the Suffolk Regiment. Robert remained on home ground until Jul 1916 when he was transferred to the King’s Own Yorkshire Light Infantry (7th Battalion) and sent to France. He was killed in action three months later on 7th Oct 1916 during the capture of Rainbow Trench near Gueudecourt at the Battle of Le Transloy, part of the Somme offensive. Robert was 19 years old. He was buried in Guedecour, but his grave was subsequently not found, and is commemorated on the Thiepval Memorial to the Missing. Robert posthumously received the British War Medal and Victory Medal.

Robert sent this postcard home just after arriving in Yorkshire in Jul 1916 (thanks to Simon on The Great War Forum). 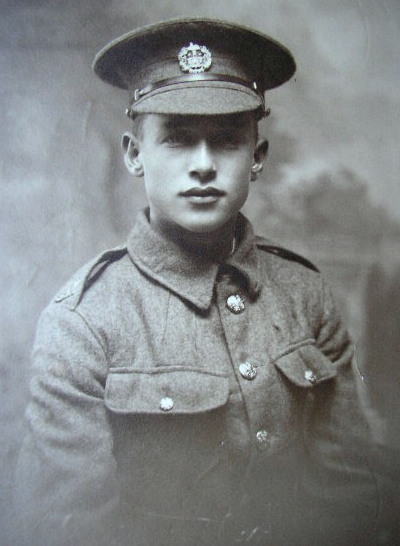 Robert’s father Samuel survived the war and was finally demobilised on 18th Feb 1919, and received the British War Medal, Victory Medal and 1915 Star.

Richard’s father Samuel James FEAKINS was born 19th Apr 1874 in Charring, Kent. He was the last of six children born to Daniel FEAKINGS, an agricultural labourer, and Sophia WATTS. Daniel and Sophia married 19th Jul 1859 in Tenterden, Kent when they were aged 25 and just 17. They had six children between 1861-1874, but Sophia sadly died the year after Samuel was born in 1875 aged 34. Daniel had lost his own mother when he was 7 years old, and Sophia’s father died when she was 13. The next time Daniel turns up in records is in 1891, and had remarried to Sarah J (surname unknown as marriage record not found). None of Daniel’s children were living it home now (in Dartford, Kent), but I’ve not found the whereabouts of 17 year old Samuel at this time. Daniel and Sarah had moved to Betsham, Kent by 1901, and was still working as an agricultural labourer. Daniel died in 1910 aged 76, I don’t know what happened to Sarah.

Richard’s mother Eliza Minnie CHAMPION was born 6th Feb 1868 in Woolwich, Kent, and was the first of four children born to Henry CHAMPION, a house painter and glazier, and his wife Emma SANDFORD. Henry and Emma married 27th Nov 1866 in Lewisham Kent, and they had four children between 1868 and 1874. Henry tragically died just before the birth of their last child in 1874, aged 29 (and Henry himself was only six when his mother died). Emma remarried three years later to John ELLISON on 25th Oct 1877 in Westminster, London. John was also a widower, his wife dying in 1876 and leaving him with eight children aged between 18 and 5. Emma and John, went on to have a further five children between them between 1878-1887. Prior to marrying Emma, John had been in the Grenadier Guards. He then worked as a cook in an army clothing factory, and by 1911 was a coffee stall keeper (age 75). Emma died in 1915 aged 67, but I’ve not found John’s death. 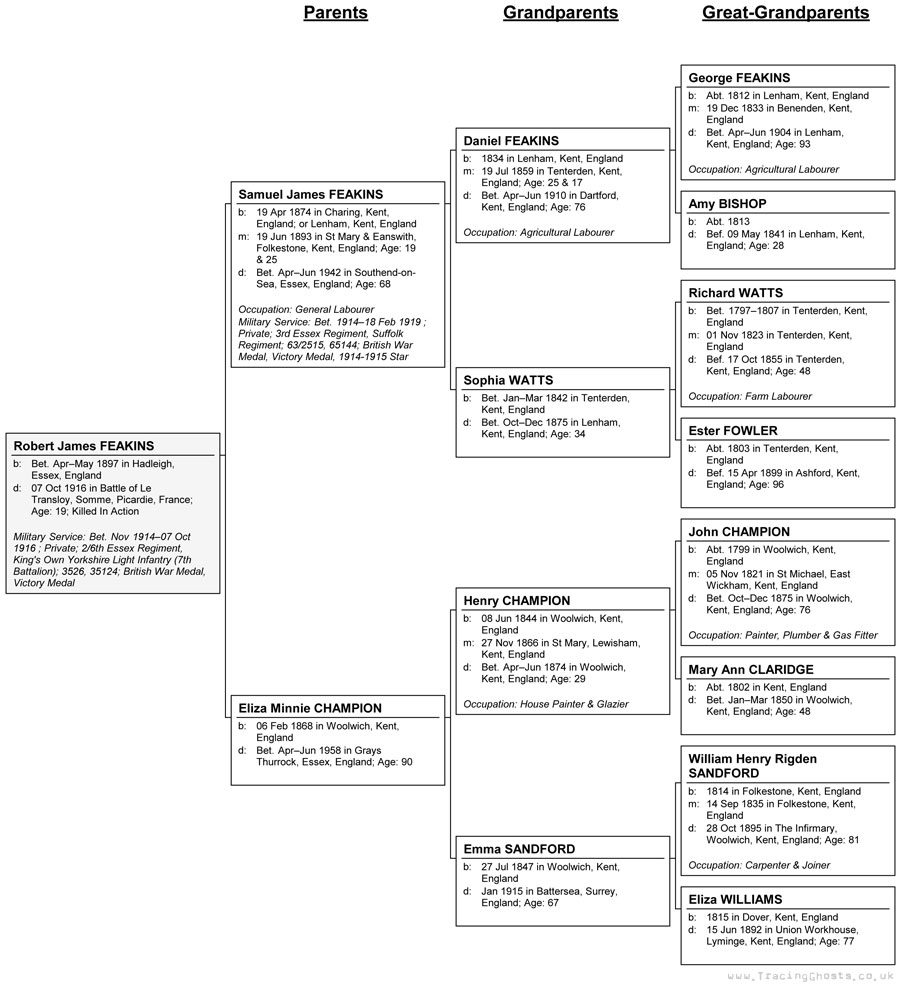 Robert was born in Hadleigh, but the family didn’t live there for long.