The St James The Less church WWI plaque lists A M GINN as having died in 1915, and the memorial plaque names him as Alfred M GINN.

James and Fanny married 1867 in St. Neots and had seven children between 1869-1882. Their first child very sadly died shortly after she was born, and they lost their second child age 4, making Alfred their eldest surviving child.

The family lived in St. Neots up to 1872, then for an unknown reason, were living in Saltburn, Yorkshire when their forth child was born. They were back in St. Neots by 1877 and in Shoreham, Kent by 1880 for the birth of their sixth child. The 1881 census places the family in Eynsford, Kent and the following year were in Friern Barnet, London for the birth of their seventh and final child.

James died age 45 and was buried on 3rd Dec 1883 in Friern Barnet, leaving Fanny with a family of five children aged between 1 and 11. She was widowed for barely four weeks when she remarried on Christmas Day 1883 to George William COPPIN, her 18 year old boarder. The speed of their marriage could be explained by the birth of her eighth child just five and a half months later. Fanny would have become pregnant around Sep 1883, so the father could have been James. Fanny had her ninth and final child in 1886 and the family were now living in Finchley, London.

On 5th Sep 1889, 17 year old Alfred enlisted into the 3rd Hussars, although he gave his age as 18 years and 8 months (adding 1 year to his age). He was still living at home in 1891 in Finchley when the census was taken, and remained on home ground until 31st Aug of that year. He then head to India aboard the H.M.S. Euphrates, where he served from 1st Sep 1891 to 26th Oct 1894. He was in Egypt between 27th Oct 1894 and 3rd Nov 1896, during which time he extended his service in order to complete 12 years service. Alfred was now with the Dragoons of the Line, 2nd Dragon Guards. He finally headed back home to England on 4th Nov 1896 and was promoted to Corporal on 1st Apr 1898, but on 2nd Aug 1898 was tried and convicted of drunkenness on duty and allowing a prisoner to escape. Alfred was demoted back to Private and sentenced to 28 days hard labour.

The Boer War began on 11th Oct 1899, and two days before being sent out to join the fight Alfred was appointed to Lance Corporal. He was in South Africa between 23rd Nov 1899 and 17th Feb 1901, and was back in Finchley with his family when the census was taken (age 29, unmarried). Alfred was promoted to Corporal once more on 23rd Apr, and sent back out to South Africa on 16th Nov. He was promoted once again to Sergeant on 1st Apr 1902 and finally back home on 2nd Jun. He re-engaged at Aldershot on 8th Aug of the same year in order to complete 21 years service.

Alfred was mentioned by Lord Kitchener in Despatch on 1st Jun 1902 for gallantry and capacity in action. He was awarded the Orange Free State Medal, Belfast Medal, Kings South Africa Medal, 1901 Clasp and 1902 Clasp.

Alfred married Annie Mary ANSELL, a local Finchley lady, 21st Jan 1903. Alfred was now 31 and Annie 34. Their first child was born in Norwich, Norfolk at the end of the year (Louisa). Alfred was posted back in South Africa with his family, and their second child was born 1906 in Mooirivier, Natal (Ilfreda). They were back in Hounslow, London by 1908 where they had their third child (Elsie).

Albert completed his 21 years of service with the 2nd Dragoon Guards on 16th Sep 1910 with the rank of Sergeant, then tragedy struck early 1911 when their youngest daughter Elsie died age 2. The family moved to Hadleigh, Essex very shortly after this, to 2 Castle Terrace, Castle Road. Alfred was now 39 and Annie 41. Their fourth and final child was born the following year in 1912 (Masie), and it was about this time which Alfred became the Sergeant Major with the Salvation Army and moved to 6 Nursery Terrace on the colony.

On 9th Jul 1914, a few days before war broke out, Alfred’s mother Fanny died aged 68. Alfred re-enlisted on 25th May 1915 aged 43, and joined the Military Mounted Police Corps as a 2nd Warrant Officer. Four days later he embarked for France (29th May), and barley four months later, on 1st Oct 1915, was killed in action. He was 43 years old, and left behind his wife Annie and three children aged 3, 9 and 11. Albert was posthumously awarded the 1915 Star, British War Medal and Victory Medal, and is commemorated on the Loos Memorial in France.

Annie and daughters moved to Park House in Hadleigh in 1916, then back to Finchley in London. A few days before peace was declared, Annie died aged 49. I don’t know the circumstances of her death. She was buried on 6th Nov 1918 and the ceremony was performed by her 12 year old daughter Ilfreda. Youngest daughter Maisie (age 6) was placed in an orphanage, but by 1923 was living with her uncle George ANSELL and his wife Florence in Finchley.

Louisa went on to study nursing and worked at St Andrew’s Hospital in Dollis Hill, London until the early 1950’s. On 29th May 1952 Louisa legally changed her surname to LUCEY, renouncing her original name of GINN. Louisa never married, and died in Kent in 1995 aged 91.

Ilfreda (aka Alfreda, Freda or Hilda) married Arthur Frank BILLINGHURST in 1929. Alfred has served as a Private with the Royal Fusiliers during the war, and the 1939 register gives his occupation as “Lens Maker Foreman Polishing”. They had three sons born between 1932 and 1944. Arthur died in 1977 in Kent aged 78, and Ilfreda on 19th May 1991 aged 84.

On 6th Jun 1928, 16 year old Maisie was sent to Canada by the Society for the Overseas Settlement of British Women. She has been previously employed in the Optical trade, and on heading to Canada was set to work as a nursemaid. She moved in with her aunt Ellen SELVEY and family, (nee ANSELL, her mothers sister) and two years later began studying nursing like her sister Louisa. Maisie married Ormond Allen GALLOPO (aka Al) on 1st Aug 1940 and they had two children together. Her husband died in 2001 aged 90 and Maisie on 26th Jul 2007 in North Bay, Nipissing, Ontario, Canada aged 95. 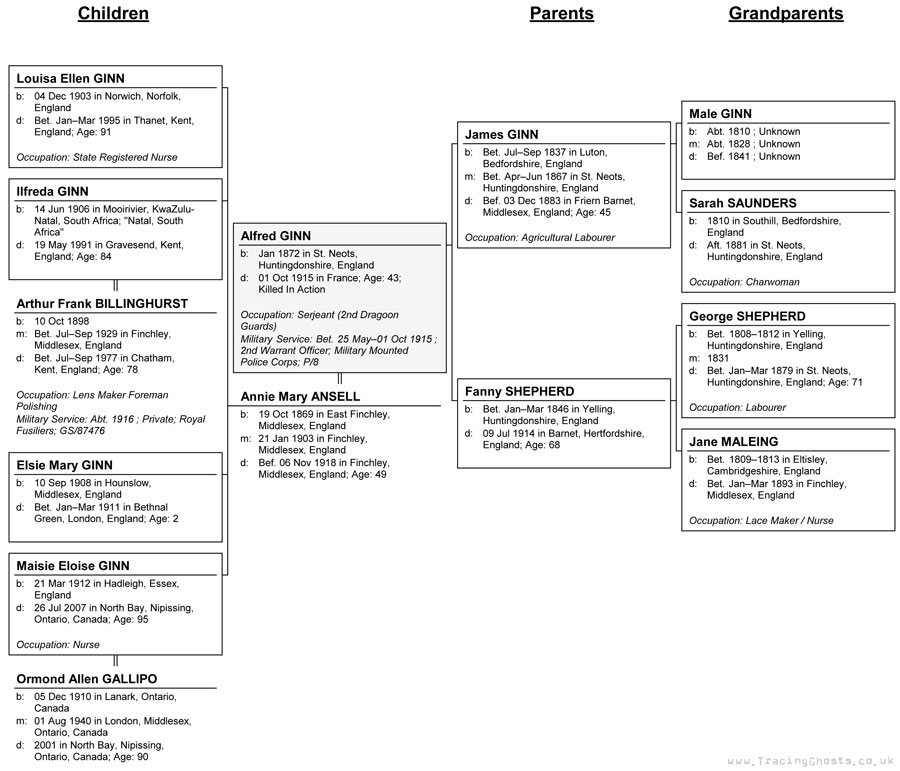 Alfred and family moved to Hadleigh in 1911 where they lived until just after his death, so his name on the memorial is easy to understand.