The St James The Less church WWI plaque lists R Collins as having died in 1917, and the memorial plaque names him as Reginald Collins. There are two Collins’ on the plaque, who are unrelated.

Reginald COLLINS was born 12th Sep 1897 in St George Hanover Square Pimlico, London and was the second for three children born to John COLLINS and Florry BRIDGES. His father was a Police Inspector, originally from Devon, and his mother was from West Ham in East London (then still in Essex).

John and Florry married in 1893 in Barking, East London (also still then still in Essex). In 1891 John, age 25, was working as a Metropolitan Police Constable in Covent Garden, London. I’ve not identified Florry in the 1891 census when she would have been 17 (perhaps working in London as not with her parents). They married a few days before Florry’s 20th birthday and had their first child the following year who sadly died age 1. Reginald was born two years later in 1897. In 1901 the family were living in Lambeth, Surrey where John was now a Police Station Sergeant. Their third child was born in 1910 and were still living in Lambeth in 1911, where John was now a Police Inspector.

Reginald was aged 16 when war broke out in 1914 and enlisted on 26th Jun 1916 into the 24th London Regiment, Queen’s Battalion. He died in action in Greece on 7th May 1917 aged 19 with the rank of sergeant, and was posthumously awarded the British War Medal and Victory Medal.

Reginald‘s father John COLLINS was born 1865 in Mary Tavy, Devon, and was the second of four children born to Robert COLLINS and Mary Ann GENDLE. Robert worked in the Copper Mines in Mary Tavy into his 30’s, then as a Farmer of 20 acres of land. He was first married to Jane HUTCHINGS in 1850 and had three children together at the time  she died in 1861 aged 32. He swiftly married Mary Ann GENDLE the following year. Mary was born in 1826, also in Mary Tavy, and died there in 1891 age 60. Robert died there a few years later in 1893 age 67.

Reginald‘s mother Florry BRIDGES was born 1873 in West Ham/Plaistow in Essex (now East London), and was the last of ten children born to John Chifney BRIDGES and Maria NORTON (4 had died by 1911). John worked as a General Labourer in a ship yard and was born in Wiggenhall St Mary the Virgin, Norfolk, whilst Maria was born in Kings Lynn, Norfolk. They married in 1855, but already had one child by this time (born in 1852). The family lived in Plaistow from about 1863, and John died there in 1906 aged 74. Maria died in 1917 age 86.

Reginald’s grandmother Maria NORTON‘s parent were William NORTON and Hannah APPLETON. When they married in 1828, William was age 30 and Hannah just 15. Maria was born in 1830, and her sister Hannah in 1835. Hannah died and another Hannah was born in 1843. In the 1841 census, William (a Mariner), daughter Maria and his mother-in-law Elizabeth APPLETON (nee DICK) were living in the same household in Kings Lynn, Norfolk. Wife Hannah was working as a servant elsewhere in Kings Lynn. They were all living in the same household in 1851, but in 1861 William was lodging on his own (still in Kings Lynn and married) and the same again in 1871. Hannah is no where to be found until after William’s death in 1874 age 71. In 1881 she pops up in West Ham working as a Nurse, and in 1891 with daughter Hannah, living on her own means. She died in 1897 age 83. 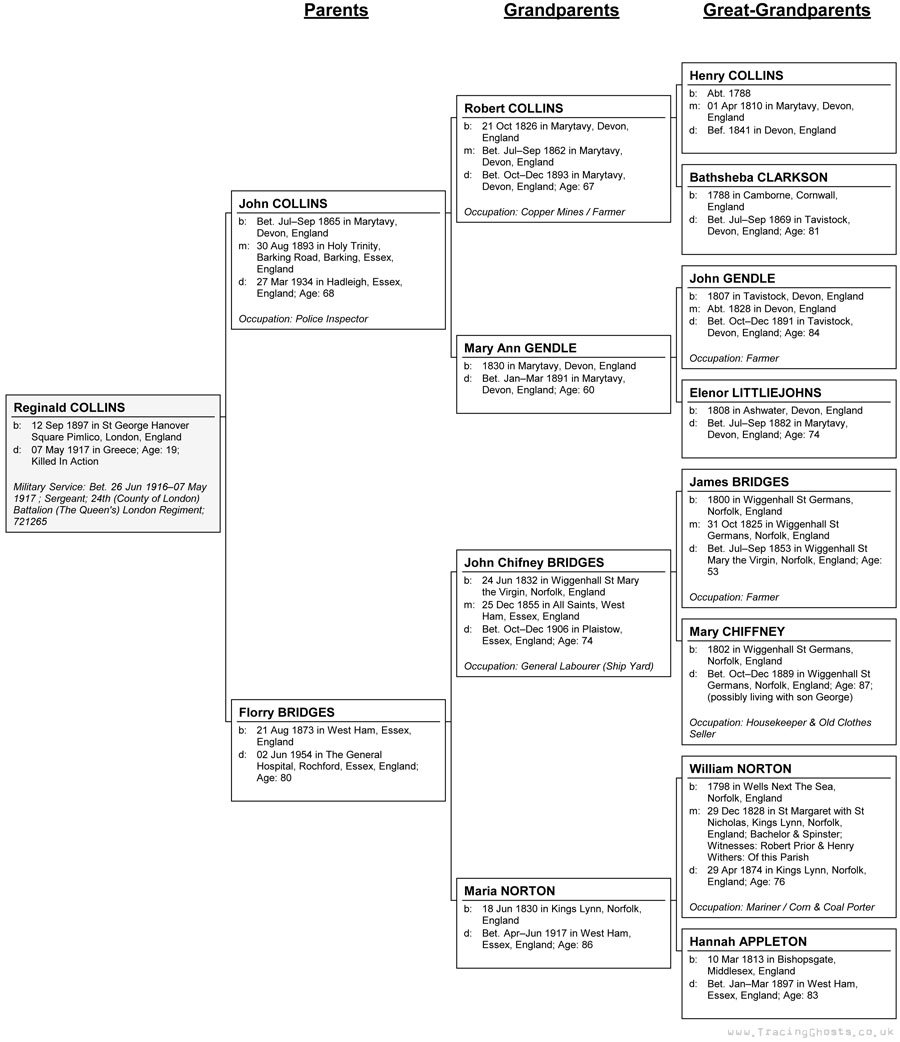 Reginald’s parents were living in Hadleigh by 1918, moving there at some point after the 1911 census. This explains why his name is on the Hadleigh War Memorial.