The St James The Less church WWI plaque lists A. GILBERT as having died in 1915, and the memorial plaque names him as ALFRED GILBERT.

Alfred GILBERT was born 9th Apr 1879 in Barningham, Suffolk and was the sixth of nine children born to Harry GILBERT, a stockman, agricultural labourer and farm bailiff, and Hortensia JAYE, the daughter of a Carpenter.

Alfred’s parents, Harry and Hortensia, married late 1870 in the Woodfield district of Suffolk and had nine children between 1871-1888. They moved around Suffolk quite a bit, with their children born in Tuddenham, Rushmere, Stanton, Barningham, Stanton again, and finally Sapiston.

Alfred and Mary were living at 1 Fairview Villas, Lynton Road, Hadleigh in 1911 with their four children, where Alfred was working as a gardener. They had a fifth child in 1912 who very sadly died shortly after his birth.

Alfred was 25 when war broke out in 1914, and his brothers were 39 and 29. Alfred is the only one I have found military records for. Of his brother-in-laws, two enlisted (Lizzie and Ada’s husbands), the others most likely being considered too old. Albert enlisted 2nd Dec 1914 as a Private in the Essex Regiment (1st Battalion). His brother-in-law Wessie Willie MASON (Ada’s husband) had already enlisted into the Norfolk Regiment (4th Battalion) on 5th Aug 1914, but was discharged on 2nd Apr 1915 due to sickness. Albert’s brother-in-law Henry SAYERS (Lizzie’s husband) enlisted into the King’s Royal Rifle Corps as a Rifleman during 1915, and in the May of that year Alfred’s sister-in-law Justina (William’s wife) died aged 42.

Alfred embarked for the Balkans, heading for Gallipoli on 10th Jun 1915, and was reported as missing in action barely three months later on 6th Aug 1915 during the operations at the Dardanelles. His exact place of death is unknown, with reports of it being both Suvla Bay and Cape Helles (about 24 miles apart). His body was identified and initially buried at Cape Helles, then later reburied at Twelve Tree Copse Cemetery in Turkey. He was 36 years old, leaving behind his wife Mary and their four children aged 4, 6, 8 and 10. Mary was notified that her husband was missing on 3rd Sep 1915.

Alfred’s sister Lizzie also lost her husband, Harry SAYER, during the war. He died in Belgium on 15th Apr 1918 aged 33. I don’t think they had any children and she never remarried. Mary and her children remained in Hadleigh for a while, but look to have moved to Westcliff-On-Sea in the 1920’s.

Alfred’s mother Hortensia died in 1922 aged 75, followed by his brother-in-law Wessie Willie MASON in 1923 age 35 (Ada’s husband), then his sister Hortensia in 1926 aged 54. Alfred and Mary’s son Alfred Jack married Marion Winifred Sarah TUBBS in 1928, which was shortly followed by the death of Alfred’s father Harry on 21 Feb 1929 aged 77. Both his parents died in Suffolk.

By 1939, Mary was living in Leigh-On-Sea age 63 (widow), along with daughters Amy and Gladys. Son Alfred now had three daughters with wife Marion and were living in South Benfleet where he worked as a foreman electrician, and daughter Eunice was a patient in Southend Hospital where died just a few months later aged 30. Amy married newly widowed Horace Monckton LING in 1946 and they had one daughter (he had four from his first marriage). Horace was 12 years Amy’s senior and had fought during the war with the Royal Army Medical Corps. I’m not sure Gladys ever married, or if she had any children. 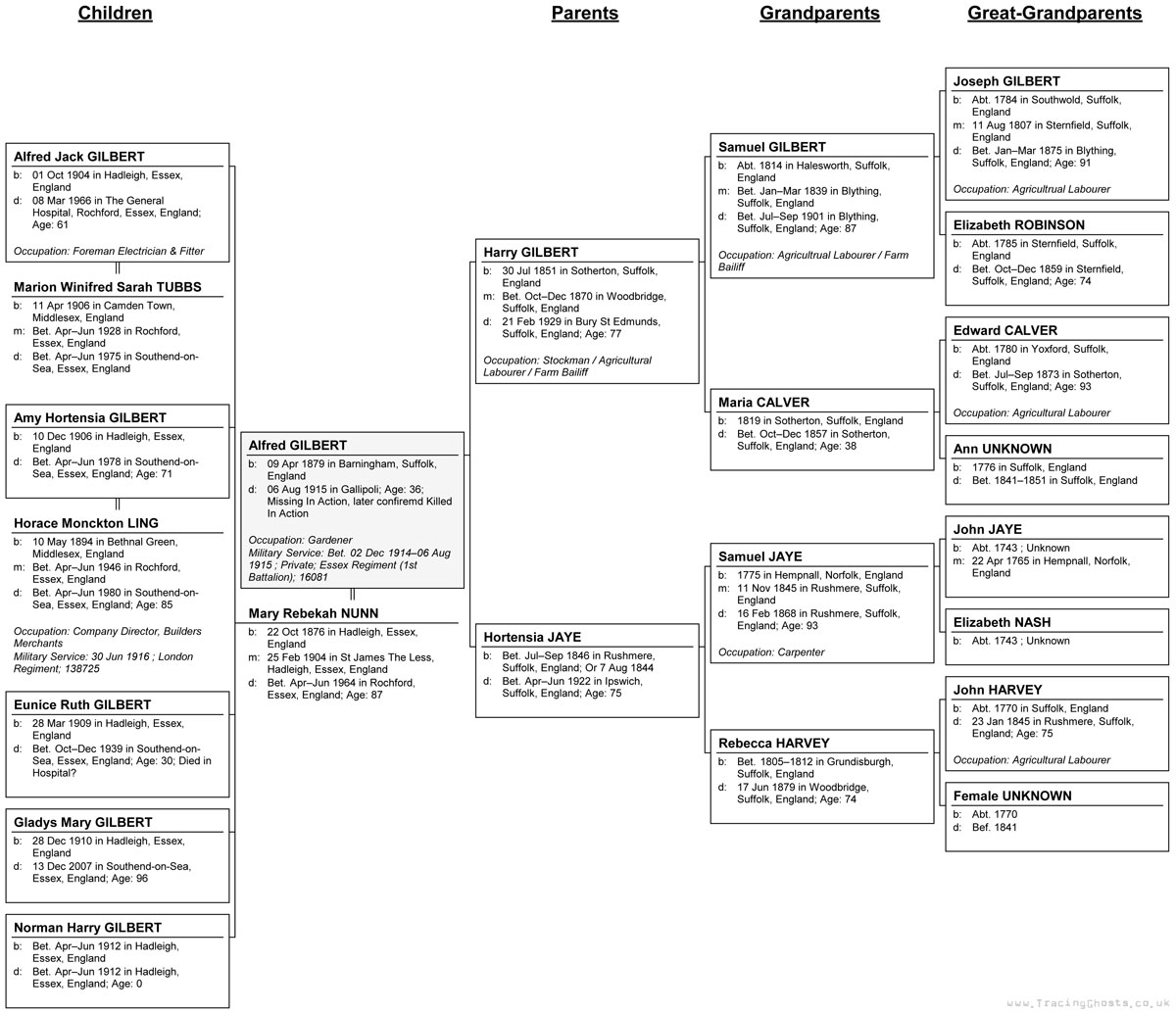 Alfred GILBERT married in and raised his family in Hadleigh before enlisting, so his place on the Hadleigh War Memorial is easy to understand.