The St James The Less church WWI plaque lists T FARLEY as having died in 1917, and the memorial plaque names him as Thomas FARELY.

According to his Canadian enlistment papers, Thomas Henry FARLEY was born on 9th Feb 1898 at Dublin, Ireland, and next of kin his uncle T BARNES of New Road, Hadleigh, Essex.

The Hadleigh & Thundersley Community Archive state that Thomas Henry FARLEY was at the Rochford Union Workhouse in 1902 when he was boarded out to Thomas & Annie BARNES. He lived with his foster parents at New Road in Hadleigh until the age of 16 (1914) when was sent to Canada.

However, the Thomas as detailed above does not show up in the 1901 or 1911 censuses, and FARLEY was a fairly uncommon surname in the Essex at that time. Living with the Barnes family at New Road in 1911 was instead Thomas OSBORN, a 10 year old boarder of unknown birth place, and Cecil LOVE, a 5 year old boarder also of unknown birth place. I thought this odd as Thomas Henry FARLEY should have been living in Hadleigh at this time, so who was Thomas OSBOURN and could they be the same person? I decided to investigate further.

In 1901, I found a Thomas FARLEY born 1897 in Southend-On-Sea, Essex, who was recorded as the “adopted child” of Joseph &  Elizabeth GRIFFITHS of 6 Bismark Terrace, Prittlewell, Essex. I then found a baptism record for Thomas Henry FARLEY and sister Olive Ada FARLEY who were baptised on the same day on 27th Jan 1899. Their residence was 7 Herbert Villa, Coleman Street (close by to Bismark Terrace), and their parents were Thomas & Emily FARLEY. The birth register for Thomas and Olive confirmed Emily’s maiden to be OSBORNE, the same surname as the boy found living with the BARNES family in 1911. Coincidence? Thomas’s birth was registered Jan-Mar 1897 and Olive in Oct-Dec 1898, so would have been coming up for 2 years old when baptised. I couldn’t find a marriage between Farley/Osborne, but then I discovered Emily had been previous married so was using her widowed surname of MURRELL when she remarried in 1895. I was then surprised to discover that Thomas Henry FARLEY had been baptised for a second time on 19th Jun 1904 when he was age 7. The same parents are listed, but rather tellingly, he was baptised at St James The Less, Hadleigh, where the BARNES family were living.

I believe that Thomas Henry FARLEY, son of Thomas and Emily of Southend/Prittlewell, is the same person as soldier as listed on the Hadleigh War Memorial, and more than likely Thomas OSBORN from the 1911 census. This would make his birth place and year incorrect on his enlistment papers, but that is not uncommon to find. FARLEY is an old Irish name, so perhaps there is a link there to his father whom I’ve discovered little about. Of the very few FARELY families living in the Southend area between 1881-1911, none are a possible fit for Thomas’s father.

Thomas Henry FARLEY‘s birth was registered in the first quarter of 1897 in Southend-On-Sea, Essex (so 9th Feb could be correct, as stated on his enlistment papers). He was the first of two children born to Thomas Henry FARLEY, a labourer, and Emily OSBORNE. This was Emily’s second marriage, having been recently widowed.

Emily’s first marriage was to Robert Andres Guy MURRELL on 5th Aug 1888 in Hockley, Essex. In 1891, Emily and family were living with her MURRELL parents-in-law at 33 Milton Street. They had three children, their last child born just before or just after Robert died in 1893 aged 26.

Elizabeth remarried two years later on 16th Nov 1895 in Southend to Thomas Henry FARLEY. They both gave their residence as 54 Milton Street, Southend-On-Sea, and Thomas stated his father’s name to also be Thomas, a labourer. Four years after marrying Frederick, he was listed living at 7 Herbert Villa, Coleman Street, Southend in the electoral records. Emily’s mother lived on Coleman Street, as did her brother.

Elizabeth and Thomas had two children together.

Thomas and Olive were baptised together on 27th Jan 1899 at All Saints, Southend-On-Sea. These are the last records of Thomas’s parents and sister I have found, so can only assume they died shortly. I have found no death records at all for any of them.

As a side note, Thomas’s uncle, Amos Harry OSBORNE married Nelly COOLLEDGE in 1899. Nelly’s brother was John Henry COOLLEDGE, who is also commemorated on the Hadleigh War Memorial.

In 1901, Thomas was living at 6 Bismark Terrace, Stromness Road, Prittlewell with Joseph & Elizabeth GRIFFITHS and noted to be their adopted child. His older half-sister Elizabeth MURRELL was living with their maternal grandmother close by (Lucy WHALLEY, formally OSBORNE, nee KIMMINGS), but his two half-brothers were not there. Elizabeth’s paternal grandparents lived at 3 Bismark Terrace, but the brothers were not to be found there either. Robert and William MURRELL had been placed in the Rochford Union Workhouse (age 11 and 9), where Thomas himself would shortly follow. Elizabeth GRIFFITHS gave birth to her first child shortly after the census was taken, but whether that had anything or not to do with their decision to place Frederick into the workhouse is unknown. There were a lot of family members close by.

According to the Hadleigh & Thundersley Community Archive, Thomas was boarded out from Rochford Union Workhouse to Thomas Frederick Francis Tracey BARNES and his wife Dorothy Annie nee GRIGG in 1902. However, when Thomas was baptised for a second time in St James The Less, Hadleigh on 19th Jun 1904 at age 7, he was still living at Rochford Workhouse. His parents names were recorded as Thomas Henry FARLEY and Emily FARLEY just as before.

Thomas BARNES was a brickmaker born 1874 in Birmingham. He moved to London then Hadleigh where he married Dorothy in 1898. They had one child together, born Christmas day 1899 and in 1901 were recorded at New Road, Hadleigh.

In 1911, Thomas and Dorothy BARNES had a second child boarding with them along with Thomas called Cecil LOVE age 5. Cecil, like Thomas, was recorded as birthplace unknown. Cecil Frank LOVE was born 1905 in Camberwell, London to a young unmarried mother named May LOVE, and his military records include this information so Cecil obviously knew of his background and birth place even if Thomas BARNES didn’t include it when he filled out the 1911 census form. Elsewhere at this time, Thomas’s half sister Elizabeth was still living with their grandmother in Southend, and his half-brother William was boarding in Foulness working as a wagoner. I’ve not found his eldest half-brother Robert at this time.

In 1912, Thomas’s half-brother William left for Manitoba, Canada (age 20) and two years later Thomas himself was sent over to Ontario, Canada at age 16. William enlisted into the Canadian Over Seas Expeditionary Force on 7th Feb 1916 and gave his brother Robert as his next of kin, who was living at 59 South Avenue, Southend-On-Sea with his maternal grandmother Lucy. Thomas enlisted as a Private in the 1st Canadian Labour Corps on 20th Apr 1916 when he was age 18y 11m old. He gave his address as “300 Clarence Street, London, Middlesex, Ontario, Canada”, occupation “Fireman”, and next of kin as “Mr T Barnes” of New Road, Hadleigh, Essex, England, and his relationship to him as “uncle”. William survived the war, but Thomas did not.

Thomas died of wounds caused by shrapnel at No.3 Australian Casualty Clearing Station on 19th Aug 1917 at age 19. At this time, the station was located in Brandhoek near Ypres in Belgium, which is also where Thomas was buried. 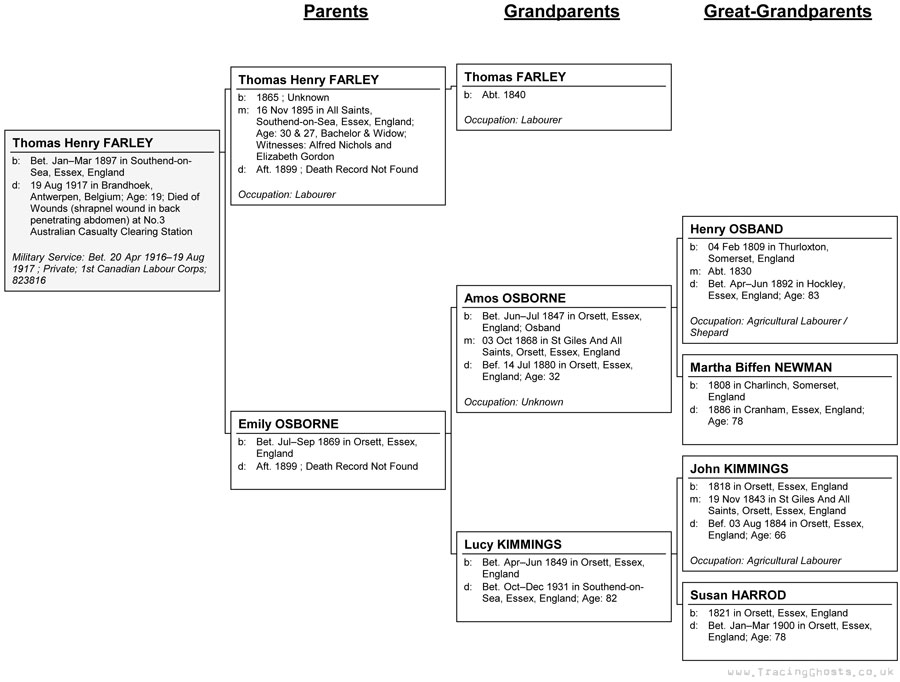 What happened to Thomas’s half-siblings?

Robert James MURRELL married Winifred Ellen HARROD in 1920 and had one child later that year. Robert was working as a brickfield labourer in 1939, living in Southend-On-Sea. He died in 1949 aged 69 and his wife in 1963 age 73.

William MURREL left for Canada in 1912 when he was age 20, working as a farmer in Oak Bank, Manitoba, Canada up until 1916 when he enlisted into the Canadian Over Seas Expeditionary Force, 183rd Battalion. He was transferred to the 2nd Labour Battalion during this time and served in France for two years. William was finally discharged on 25th Mar 1919 back in Canada. His brother Robert was listed as next of kin, and their sister Elizabeth named as sole heir in his Will. His records also stated that both his parents were dead.
William was living in Springfield, Manitoba, Canada in 1921, and back to working as a farmer. He married Canadian born Flora Inez BEDDALL 15th Jul 1936, who was 19 years his junior, and they one at least one child born 1941. William died 18th May 1968 in Winnipeg, Manitoba, Canada aged 77, and Flora died 26th Oct 1976 aged 66.

Elizabeth MURRELL married Percy MOORE in 1914, a soldier in the 1st Lancashire Fusiliers. He was stationed in India in 1911, and fought during the war. I’ve not found any record of children, and Elizabeth was widowed by 1939. Like her brother Robert, Elizabeth remained in Southend-On Sea, where she died in 1975 aged 81.

What about Thomas’s foster parents?

Thomas’s foster parents were Thomas Frederick Francis Tracey BARNES, a brickmaker, and Dorothy Annie GRIGG. Thomas was born 1st Nov 1874 in Birmingham, Warwickshire and the only child from his father’s first marriage. His parents, Thomas Frederick Francis BARNES and Sarah Ann LANE, moved to London after Thomas was born where he worked as a mechanical engineer. His mother died in 1891 and his father remarried to Laura Ann BURDETT, twenty years his junior, and proceeded to have eleven more children between 1892 and 1907. The first two children were born in Hackney and the rest in Walthamstow, Essex. Of their eleven children, they lost four as babies. Thomas’s father died 17th Feb 1916 aged 67, and his second wife shortly after on 24th Nov 1918 when she was 49 years old.

Thomas moved to Hadleigh, Essex at some point in the 1890’s and married Dorothy Annie GRIGG on 19th Nov 1898. Dorothy was born 31st Oct 1874 in Hadleigh, Essex and the only child I have found born to her parents William GRIGG and Mary HALLS. William was nearly thirty years older than Mary, who was his second wife (if they married, as I’ve found no record). Dorothy’s father died early 1900 aged 87, and her mother in 1918 aged 76.

Thomas and Dorothy had one child together, Ivy Mary Dorothy BARNES born 25th Dec 1899 in Hadleigh, and fostered at least two children that I know of (Thomas Henry FARLEY and Percy Frank LOVE). Ivy married Albert Arthur GRIGG in 1924, who was her 2nd cousin 2x removed. Dorothy died in 1942 aged 67, and Thomas in 1948 aged 73. He had still been living on New Road, Hadleigh.

Thomas lived in Hadleigh between the ages of 4 or 7 to 16 with his foster parents.