Richard and William were the eighth and ninth (of nine) children born to John COWELL and Mary BUSH. Their father was an agricultural labourer (amongst other things) from Cambridgeshire whilst their mother was born in Great Barford, Essex. Census records show John worked as an agricultural and farm labourer (1871/1881), shepherd (1891), farm stockman (1901), then as a gardener in 1911.

John and Mary married 2nd Jan 1879 at St Mary the Virgin, Great Bardfield and their first child was born eight and a half months later. The family lived in Little Bardfield up until Richard’s birth in 1893, then moved to Hadleigh where there last child William was born in 1897 (they lived right next to the Castle Hotel pub on the High Street). John and Mary lost their sixth child at age 2 around the same time their seventh child was born, and shortly after moving to Hadleigh their fifth child died aged 10. Their second and third children were twins.

In 1911, Richard was age 17 and working as a shop assistant, whilst 14 year old William was an errand boy. A few weeks after war broke out in 1914, youngest son William enlisted aged 17 as a Private in the 9th Essex Regiment. After nine months of training, he was sent to France on 30th May 1915 and on 17th Dec 1915 died at the 33rd Casualty Clearing Station in Béthune after sustaining very severe wounds to both legs. He received the 1915 Star, Victory and British War Medals. William was buried at Béthune Town Cemetery in the Pas-de-Calais of France with the inscription:

Richard enlisted a year and a half later during May 1917 aged 24 (he was unmarried). He first served as a Private in the 25th Reserve Battalion of the Rifle Brigade, then was transferred to the Labour Corps. 281st Area Employment Company. He died in France nine days after peace was declared on 19th Nov 1918 from pneumonia aged 25, and received the Victory and British War Medals. Richard was buried at Villers-Bretonneux Military Cemetery near Fouilloy in the Somme region of France, and it appears to have been his sister Rose who organised the headstone, which reads:

Their Names Liveth
For Evermore

John and Mary’s eldest daughter, Annie, married John CHAPMAN in 1902 and had five children by the time her brothers had died (although they sadly lost one in infancy). Their second daughter Lily married William James FAUX in 1912 and had one child together in 1914. These were John and Mary’s only grandchildren.

John and Mary remained in the same house in Hadleigh with their daughter Rose. John died in 1924 aged 72 and Mary in 1932 aged 79. Rose looks to have continued to live in the family home until her own death in 1960 aged 78 (unmarried). Her twin sister Lily died very shortly after her. I don’t know when John and Mary’s eldest daughter Annie died, nor their daughter Mary (who was living in Hadleigh in 1939, age 55 and unmarried). Daughter Emily also remained unmarried and died in 1983 aged 92.

Both of Richard and William’s grandfathers were agricultural labourers, as were all four great grandfathers. Their great grandfather Edward COWELL was also a soldier in the 20th Regiment of Foot for 151/2 years between 1799-1815 and fought in the Napoleonic and Peninsular Wars. He received the Egyptian Bar in 1801, along with the Army Gold Medal and Military General Service Medal. He was discharged in 1815 after receiving a gunshot wound to the thigh (age 34). 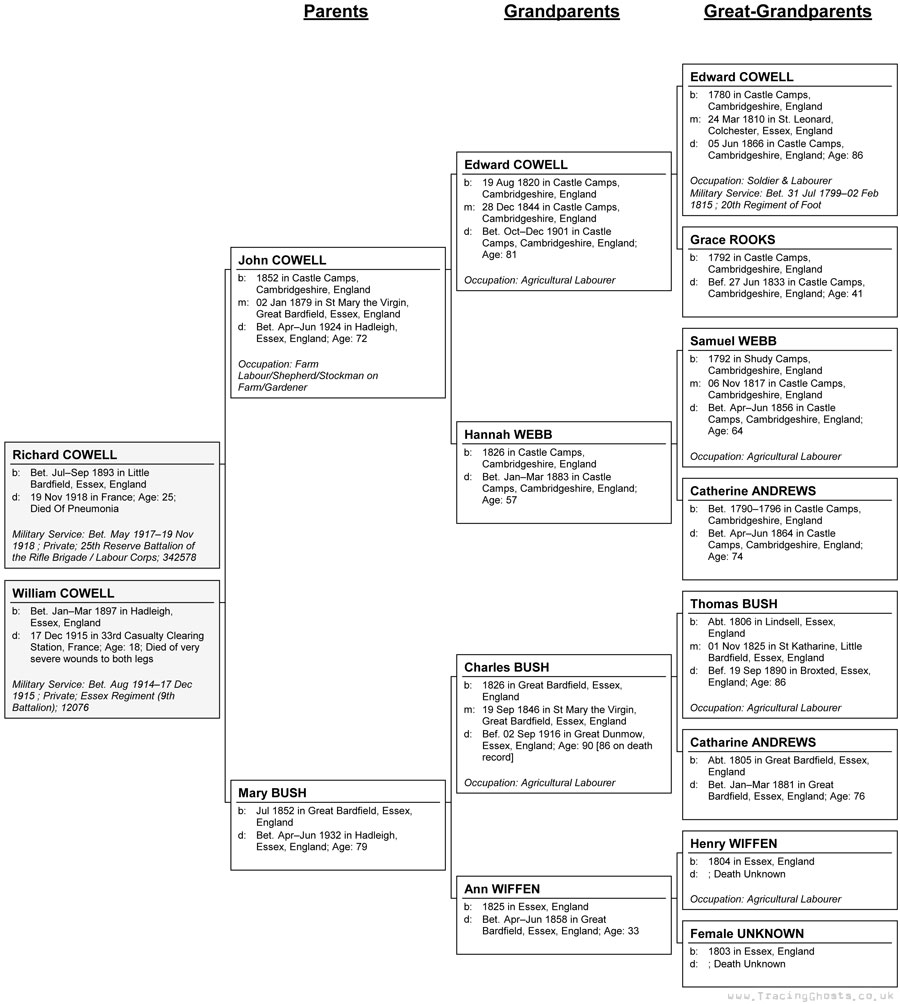 Richard and William’s family moved to Hadleigh just before William was born, where their parents remained until their deaths.