The St James The Less church WWI plaque lists H J Bush as having died in 1916, and the memorial plaque names him as Herbert John Bush.

John and Esther married in 1879. Their first five children were born in Rawreth, then they moved to Thundersley where they had three more. The family then moved to Hadleigh between 1901-11 and lived at New Road. John worked as an agricultural labourer in his twenties and thirties, by 1901 he was labouring on the Water Works (age 47) and by 1911 was working as a Butcher’s stockman (age 57). Esther died shortly after the 1911 census was taken at age 52, and John in 1933 aged 80.

Herbert was still living with his parents 1911 at age 25, unmarried and working as a carman for a builder. He enlisted as a Private into the Essex Regiment 2nd Battalion March 1915 (age 29), and six weeks after being sent abroad died in action on Friday 15th Oct 1915 age 31. According the Hadleigh & Thundersley Community Archive, he was shot in the heart by a sniper at Les Boeufs during the battle of the Somme, dying instantly. He posthumously received the Victory Medal and British War Medal. His Dependant’s Pension card was registered to Mrs Nellie Boatman of New Road Hadleigh (his sister Ellen), with the note “Widows Case no. 2747 re Pt James Boatman” written in read (see more on Ellen lower down). His remaining pay and effects went to his father.

Two months after his brothers death, Joseph (age 28y 9m) enlisted into the Royal Garrison Artillery as a Private then Gunner. In 1911 Joseph had been working as a Bricklayer, and married the following year to Lily Lizzie SCHOOLING (the younger sister of his brother-in-law Thomas Schooling, whom Alice married in 1899). At the time he enlisted they were living at Norfolk Cottage, Beach Road in Hadleigh, had one child and was working as a well sinker. They had a second child in  1916 and a third in 1918. Joseph served throughout the war, serving abroad from 31-3-18 up to 27-9-18 when he received a gun shot wound in his right his buttock and was subsequently hospitalised. He was discharged on 4th Apr 1919 as being “no longer physically fit for war service”, and received the Victory Medal, British War Medal, and Silver War Badge. The following year their son Jack died at age 3. The family were still living together in Hadleigh in 1939 at 2 Branch Road, Joseph working as a Bricklayer (age 52), as was their eldest son Percy (age 26, now married). Their youngest son Alfred (age 21) was working as a Mercantile Marine Tailor’s Salesman. Joseph died in 1953 aged 65, and his widow Lizzie in 1985 age 92 (of 4 Branch Road).

What of the sister?

Alice married Thomas Henry SCHOOLING (a carpenter and joiner) on 4th Nov 1899 in Thundersley. In 1901 they were living in South Benfleet with their 3 month old daughter named Queenie. They had moved to Hadleigh by the following year and had three more children (all boys). In 1911, just before the birth of their third child, they were living at 3 Sydney Cottages, Church Road, Hadleigh, and withing their household was a “nurse child” called Cecil Keir Moultrie White born 1905 in Thundersley (unable to trace tree). In 1939, the family were living at 1 Church Road, Hadleigh and Cecil was still with them. Thomas died in 1949 aged 70 and Alice in 1853 aged 72.

Ellen (aka Nellie) married James BOATMAN in mid-1915, most likely in Hadleigh. James enlisted on 7th Sep 1914, and was discharged 20 days later as”Permanently Unfit – 392 iii c”. “iii” refers to “not being likely to become an efficient soldier” and “c” refers to “recruit within three months of enlistment considered unfit for service”. His next of kin was listed as “brother David, address unknown”. He married Nellie under the name “Arthur J Boatman”, and his death in 1918 (age 29) was also registered under Arthur J Boatman”. However, his given name was actually William James Boatman, and Arthur J (John) Boatman was he brother. Arthur married just after James in 1915 and lived until 1965. James was a year younger than stated on enlisting (25, not 26), and born in Harlow not Thundersley. His mother Eliza was widowed (her first husband James was 40 years her senior) and she remarried to John Gates, moving to Hadleigh by 1901 and Thundersley by 1911. James and David were both living in Thundersley in 1911, so presumably lost contact in the three years before he enlisted. Nellie was named on her brother Herbert’s Dependant’s Pension card c.1920 alongside the note “Widows Case no. 2747 re Pt James Boatman” written in read. She and James had no children, nor did she have any in her second marriage in 1928 to Thomas Henry HALTON (who was the brother of Nellie’s sister Sarah’s husband). Thomas joined the Royal Air Force in 1917 at age 18. Ellen died in 1968 age 78, and Thomas in 1993 age 93.

Sarah married George Alfred HALTON in 1918 (Nellie married his brother Thomas in 1928). George served as a Gunner with the Royal Garrison Artillery during WWI and received the British War Medal and Victory Medal. In 1939 they were living in Hornchurch, with George working as a house painter and decorator. They had four children, and George died in 1958 age 64, and Sarah in 1978 age 84.

Rose (aka Rosie) was working as a servant in 1911 age 14 for a Hadleigh family. The head was Theodore Ellard Allwell, a Butcher. She married Sidney “Jack” John SMITH in 1919 age 21 (Jack was 28). In 1911, Jack was living with his parents in Greenwich, Kent. He emigrated to Canada in 1912 at age 22. When he enlisted into the Canadian Over-Seas Expeditionary Forces on 21 Jul 1915, he was living in Peace River, Northern Sunrise, Alberta, Canada and working as a farmer. He lists his next of kin as his father who had moved to Hadleigh. Perhaps he was visiting on leave when he met Rosie? Jack returned to Canada directly after marring Rosie, taking her with him. In 1921 they were living in Grande Prairie, Alberta where they look to have lived all their lives. They had four children, but sadly their first child died at just 30 days old. Rosie herself died in 1985 age 87, and Jack in 1988 age 98.

This wonderful photograph was take on Rosie and Jack’s wedding day in 1919. The Bush family are on the right of the photo. I’m guessing Nellie is sat next to Rose dressed in mourning black and their father next again. The three ladies behind are most likely the other three sisters, and two of the chaps must chaps the remaining brothers (ages 32 and 19). The chap standing in the military uniform on the right appears to have the same badges as Jack. The family on the left are Sidney’s. Photo thanks to Sidney’s great grand nephew Michael H. Mann. 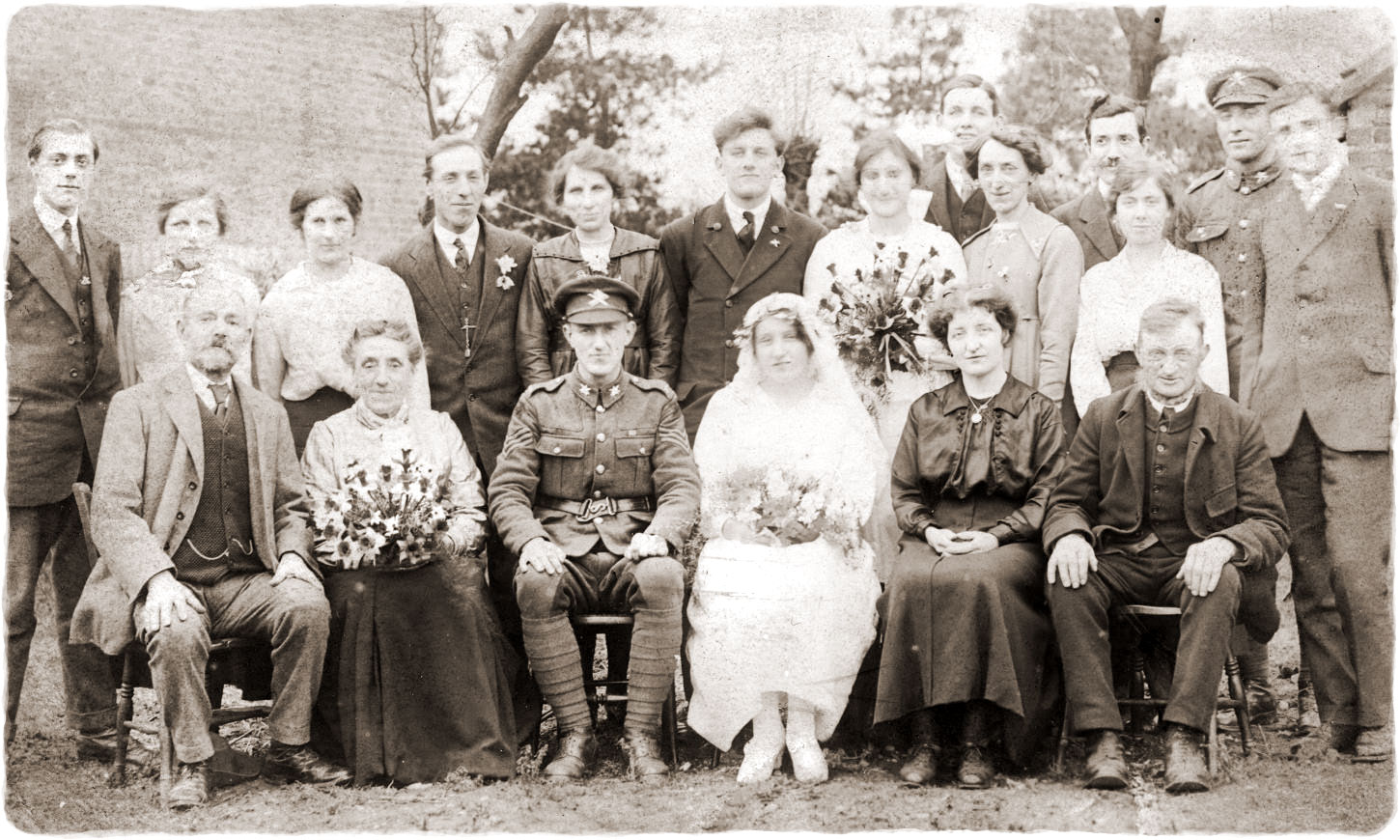 Herbert’s father, John BUSH, was the third of three children born in Hockley, Essex to parents Joseph BUSH (an Agricultural Labourer) and Ann WATSON (who were second cousins). Joseph died just after John was born age 32, and the three children seem to have been brought up by their their grandparents (Ann’s parents). Ann remarried four years later to Arthur ROBINSON and had a further seven children (the last two of which died as babies).
Herbert’s mother, Esther Annie WATSON, was the second of seven children born in Rayleigh and Thundersely, Essex to parents George WATSON (an Agricultural Labourer) and Sarah Ellen KING. Esther’s father George was the first cousin of her husbands mother (their fathers were brothers).

Herbert’s paternal grandfather, Joseph BUSH, was the sixth of nine children born in Great Dunmow and Elsenham, Essex to parents John BUSH (an Agricultural Labourer) and Sophia KEFFORD.
Herbert’s paternal grandmother, Ann WATSON, was the third of three known children (there may have been more) born in Hockley and South Fambridge, Essex to parents Isaac WATSON (and Agricultural Labourer) and Mary Ann WEST.

Herbert’s maternal grandfather, George WATSON, was the sixth of ten children born in Rettendon, Thundersley and Rawreth, Essex to Henry WATSON (an Agricultural Labourer and brother of Isaac above) and Mary Ann WALKER.
I haven’t been able to trace Herbert’s maternal grandmother, Sarah Ellen KING. Her father was John KING, as stated on her marriage record, but can’t find a baptism for her in Hockley (where she was born). 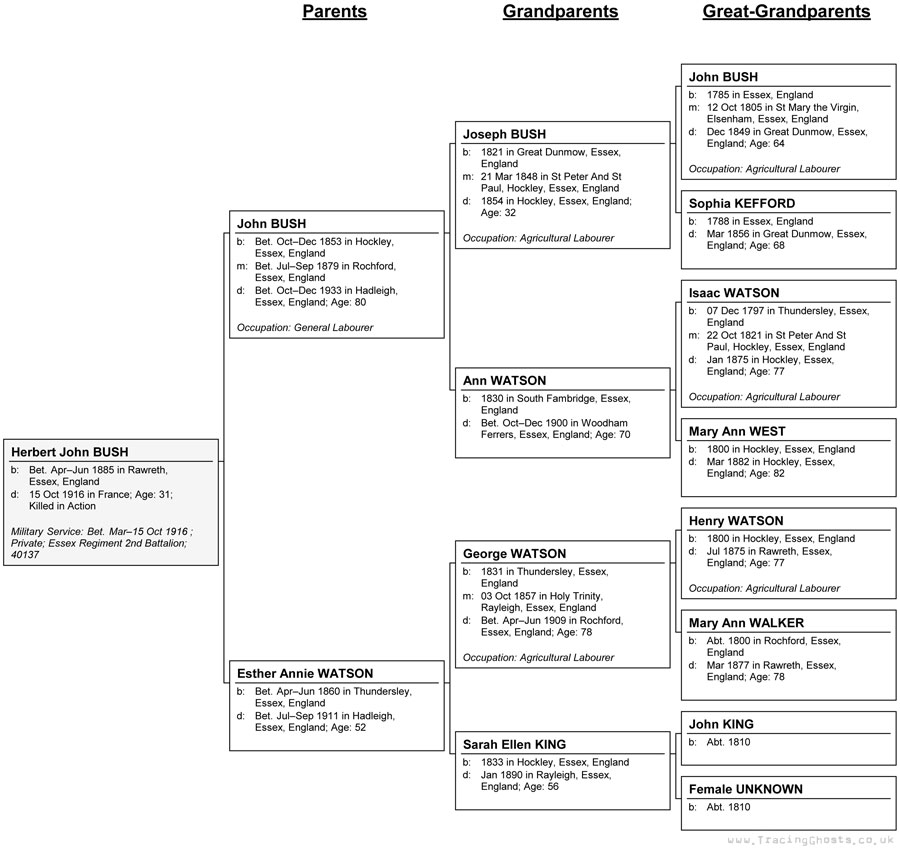 Herbert’s family moved to Hadleigh between 1901-1911, where his parents remained until their deaths in 1911 and 1933. This is why Herbert is on the Hadleigh War Memorial.