The St James The Less church WWI plaque lists S Choppen as having died in 1916, and the memorial plaque names him as Stephen Choppen. The other Choppen listed (Fred) was his cousin.

Stephen CHOPPEN was born early 1895 in Hadleigh, Essex. He was the fifth of ten children born to Harry CHOPPEN, a bricklayer, and Frances Selina HARRISON. His father was also born in Hadleigh, whilst his mother was born in Twickenham, Middlesex.

Harry and Frances married in St James The Less Church in Hadleigh on 3rd July 1883 and their first child was born the following January (so Frances was about 10 weeks pregnant at the time. In 1891 the family were living in Hadleigh High Street, but by 1901 they had moved to Church Road where they remained. No house name was given in 1901, but 1911 shows it was “Elsie Cottage”. By this time they had lost their two youngest children, both as babies (Frank in 1904 and Amy in 1907). Harry was working as a school caretaker and Stephen as a plasterer (age 16). Shortly after this the family moved to “Ashburnham” on Church Road.

When war broke out, Harry and Frances had three sons of enlistment age and a forth just coming up to (Henry age 30 and married with two children, William age 22, Stephen age 19 and Sidney age 17). I don’t beleive the oldest son enlisted, but their next three son’s certainly did, possibly all quite early on. Sidney enlisted into the Royal Field Artillery on 27th Aug 1914. He gave his age as 18y 3d, but was actually 17y 10m old at the time and William joined the King’s Royal Rifles. Stephen joined the Essex Regiment 9th Battalion and was sent to France on 30th May 1915. He was accidentally killed by a grenade explosion almost exactly a year later on 25th May 1916. He had the rank of Lance Corporal, and was posthumously awarded the 1915 Star, Victory Medal and British Medal. Stephen was 21 years old, and his cousin Fred CHOPPEN was killed just four months later age 27. His newspaper report (below) incorrectly named his brother Sidney as Henry.

What of their other children, Stephens brothers and sisters?

Henry Herbert Harrison CHOPPEN married Martha SNOW in Hadleigh 1909 and they had three children together. Henry worked as a plasterer and tile merchant. Martha died in 1935 in the Victoria Nursing Home, Westcliff-on-Sea, Essex at age 44 and Henry swifly remarried the following year to Alice Maud Marion NEAL. Henry died in Ventnor, Hampshire in 1960 age 76 and his second wife Alice seven years later age 84.

Agnes Mary Selina CHOPPEN married Francis Henry COLLINS (a pipe fitter) in Hadleigh Christmas day 1912 and had one daughter in 1917. They lived in Southend then Leigh, where Francis died in 1955 age 68 and Agnes in 1959 aged 74.

Ann Florence Elizabeth Harrison CHOPPEN married William John KNIGHT (a bread and cake maker) in 1910 and they had five children together. In 1939 they were living in Hadleigh on Bilton Road. Ann died in 1953 age 64. I don’t know when William died.

William Alfred Ernest CHOPPEN enlisted into the King’s Royal Rifle Corps, rose to Acting Sergeant and awarded the 1915 Star, Victory Medal and British Medal. He married Grace Emma May SEWARD in 1917 (in the Barnet district) and had one daughter in 1919. William worked as a bricklayer, like his father, and died in Daws Heath, Essex in 1969 age 76. Grace did in 1973 age 79.

Sidney CHOPPEN had been a Bombardier, Corporal then Sergeant with the Royal Field Artillery during the war, enlisting underage shortly after war broke out. He was awarded the Military Medal as well as the 1914-1915 Star, British War Medal and Victory Medal. He married Gladys Elizabeth PAYNE in 1927 in East Ham, Essex and had two daughters. In 1939 he was working as a foreman baker and the family were living in New Road, Hadleigh. Sidney died in 1966 in Leigh age 69, and Gladys remarried in 1970 to Walter Frederick RODER. Walter enlisted into the South Fusiliers 27th (Reserve) Battalion in 1915, stating his age to be 18. However, he was actually only 15 and was discharged 6 months later when his father sent them a letter confirming his son’s age after learning he was about to be sent abroad. But his father also added that he didn’t wish his son to discharged as he liked the life, also had another son under the age of 18 in the army, and he himself was also in the army. Walter died in 1982 aged 82 and Gladys in 1996 aged 91.

Elsie Henrietta CHOPPEN married John Arthur GRIGG, a bus driver, in 1926 in Hadleigh. They lived in Daws Heath, Essex and don’t appear to have had any children. John died in 1969 age 68, and Elsie in 1974 age 74.

James George CHOPPEN married Olive Annie PAYNE in East Ham in 1927 and had three children. In 1939 they were living at Kingsway Parade, Hadleigh and James was working as a hairdresser. James died in hospital in 1954 aged 52, previous to this he and his wife were living in Southend. Olive died in Thundersley, Essex in 1970 aged 63.

Frank Ottway CHOPPEN died as a baby. His birth was registered 3rd Q of 1904, as was his death.

Amy Doris CHOPPEN died as a baby. Her birth was registered 3rd Q of 1907 and her death in the 4th Q of the same year.

Stephen’s father, Harry CHOPPEN, was born 1862 in Hadleigh, Essex and was the fifth of five children born to Stephen CHOPPEN and Ann HARROD. Stephen (the grandfather) was a local Hadleigh resident, having been born there in 1831. In 1851 he was living in Bowers Gifford, Essex working as an Apprentice Blacksmith. Two years later he married Ann and they moved to Southchurch where their first child was born (James), then back into Hadleigh by 1857 where their second child was born (Mary). Sadly Mary died the following year (age 1), shortly before their third child was born (Agnes). The 1861 census shows Stephen was working as a Blacksmith and his brother Alfred was living with them (also a Blacksmith). Shortly after the census was taken they had their forth child (another Mary) and the following year their fifth and final child was born (Harry). Mary died in 1863 (age 1) followed quickly after by Agnes (age 4). Stephen was still working as a Blacksmith in Hadleigh 1871, the family living at 25 Village Street with a lodger (also a Blacksmith). By 1881 the family were living at Castle Inn, High Street and Stephen’s occupation was listed as “Licensed Victualler”, son James as “Bricklayer” and son Harry as “Ostler”. In 1871 they were living at 25 Village Street and now had five children and still working as a Blacksmith. In 1881 they were living at Castle Inn in the High Street, and Stephen’s occupation was listed as “Licensed Victualler”. By 1891 Stephen and Ann were living at Rectory Road, Hadleigh and he was listed as a Blacksmith again. Ann died the following year aged 60, and Stephen died in 1900 aged 69.

Stephen’s mother, Frances Selina HARRISON, was born in 1864 in Twickenham, Middlesex and was the second of ten children born to William George HARRISON and Mary Searle MURRAY. William was a wheelwright and his father a blacksmith farrier and ironmonger. Mary’s father was a baker, and Searl was her mothers maiden name. The family moved around between Twickenham, Chelsea, Feltham and Teddington in Middlesex for many years. By 1901 William was an inmate in Staines Union Workhouse with his occupation listed as blacksmith, and Mary was still living in Teddington on her own means along with their two youngest children (age 18 & 20). William died in the workhouse in 1909 aged 68 and Mary died in Surrey in 1919 aged 79. 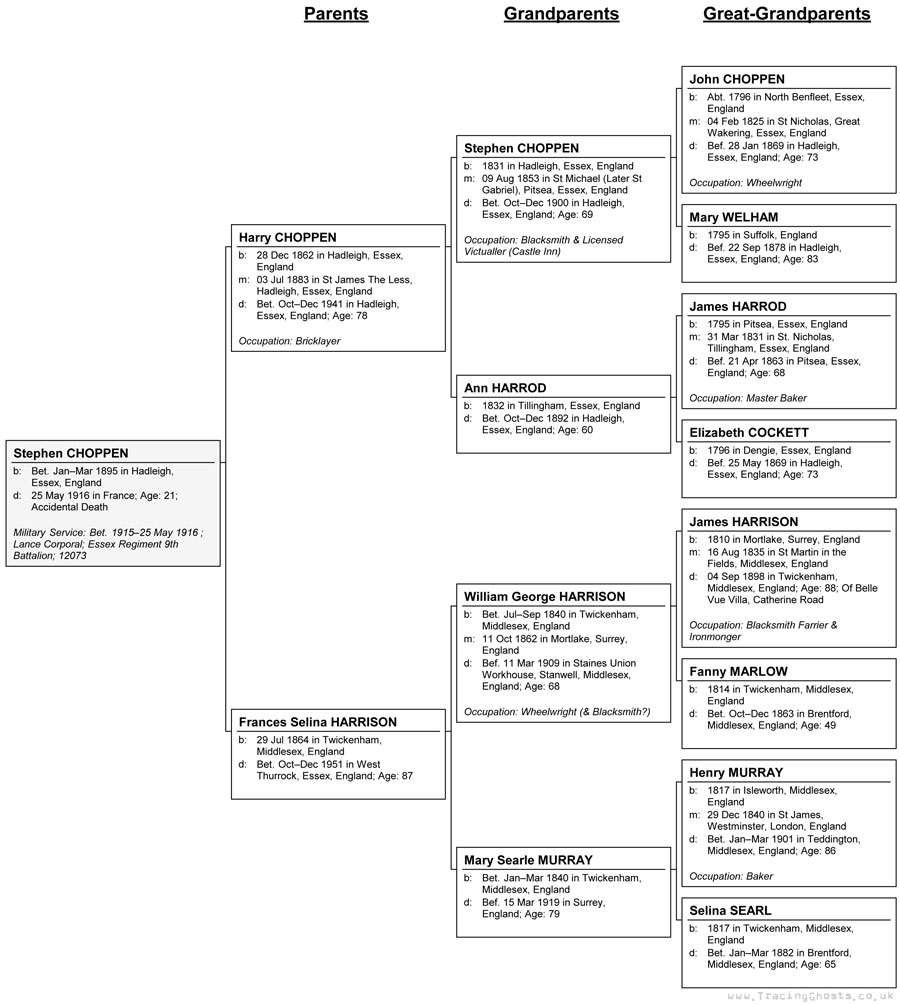 Stephen was born and lived in Hadleigh, so his place on Hadleigh War Memorial is easy to understand.