The St James The Less church WWI plaque lists F Choppen as having died in 1916, and the memorial plaque names him as Fred Choppen. The other Choppen listed (Stephen) was his cousin.

Fred CHOPPEN was born in 1889 in Thundersley, Essex along with his twin sister. He was one of four children born to James Thomas Harrod CHOPPEN, a Bricklayer and Blacksmith, and Maria BULL, a Needlewoman. His father was born in Southchurch, Essex and mother born in Great Burstead, Essex.

James and Maria married in 1882, registered between Jan-Mar. Their first child (Jenny) was born a few weeks after they married, and census records described her as a “helpless idiot dwarf”. Their second child was born two yeas later (Albert), and twins in 1889 (Fred and Kate). Sadly they lost one of their twins just over a year later (Kate).

Tragedy struck again in 1896 when James died at age 41. Maria was left with three children to raise on her own (Jenny was 14, Albert 12, and Fred was just 7). Maria’s occupation in 1901 was “needlewoman”. In 1907, Jenny died (age 25) and Albert had emigrated to New Zealand. By 1911, Maria had been admitted to the Rochford Union Workhouse and Infirmary as an “imbecile”, whilst Fred was still living in Thundersley (age 22 and working as a Labourer).

Fred enlisted into the King’s Royal Rifle Corps on 22nd Feb 1915 and listed his mother as his next of kin, she was still living at Rochford Union Workhouse and Infirmary. Fred at this time as working as a Cowman and living with his uncle Harry CHOPPEN at Ashburnham, Church Road, Hadleigh (father of Stephen CHOPPEN, who is also commemorated on the Hadleigh War Memorial). Maria died a few months later age 55, and the following year Fred was killed in action in France on 15th Sep 1916. He was 27.

The only surviving member of Fred’s immediate family was Albert, who remained in New Zealand until his death in 1965 aged 80.

Fred’s father James Thomas Harrod CHOPPEN was born 1855 in Southchurch, Essex and was the first of five children born to Stephen CHOPPEN and Ann HARROD. Stephen was a local Hadleigh resident, having been born there in 1831. In 1851 he was living in Bowers Gifford, Essex working as an Apprentice Blacksmith. Two years later he married Ann and they moved to Southchurch where their first child was born (James), then back into Hadleigh by 1857 where their second child was born (Mary). Sadly Mary died the following year (age 1), shortly before their third child was born (Agnes). The 1861 census shows Stephen was working as a Blacksmith and his brother Alfred was living with them (also a Blacksmith). Shortly after the census was taken they had their forth child (another Mary) and the following year their fifth and final child was born (Harry). Mary died in 1863 (age 1) followed quickly after by Agnes (age 4). Stephen was still working as a Blacksmith in Hadleigh 1871, the family living at 25 Village Street with a lodger (also a Blacksmith). By 1881 the family were living at Castle Inn, High Street and Stephen’s occupation was listed as “Licensed Victualler”, son James as “Bricklayer” and son Harry as “Ostler”. In 1871 they were living at 25 Village Street and now had five children and still working as a Blacksmith. In 1881 they were living at Castle Inn in the High Street, and Stephen’s occupation was listed as “Licensed Victualler”. By 1891 Stephen and Ann were living at Rectory Road, Hadleigh and he was listed as a Blacksmith again. Ann died the following year aged 60, and Stephen died in 1900 aged 69.

Fred’s mother Maria BULL was born 1859 in Great Burstead, Essex. She was the first of twelve children born to Joseph BULL and Maria SCOTCHMAN. Joseph was born c.1837 in Little Burstead, Essex and Maria in 1841 in Laindon, Essex. Joseph and Ann married 10th Mar 1859 (they were 22 and 17) and had their first child about 5 months later (Maria). In the 1861 the family are all over the place! Joseph was lodging on his own next door to his parents in Great Burstead (who had his daughter Maria with them) and working as a Wheelwright like his father, whilst wife Maria was living with her parents in Laindon, having just given birth to their second child the previous month. They had their third child in Great Burstead in 1862 and by 1864 had moved to Thundersley were the next nine children were all born between 1864-79. They lost their seventh child in 1870 age 1, but all the rest made it into adulthood. The 1871 census shows the family living at White Hart, Thundersley, Essex and Joseph’s occupation as “Publican & Occupier of 11 Acres of Land Employing 2 Men” (this is where Fred’s mother grew up as she was still living with her parents in 1881 shortly before she married James CHOPPEN). Maria died in 1885 aged 44, when her youngest children were aged 6, 8, 10, 12, 14 and 17. By 1891 Joseph and four of his children were living at Wood Farm in Eastwood, Essex where he was working as a Farmer and Wheelwright. Joseph died in 1899 aged 62. 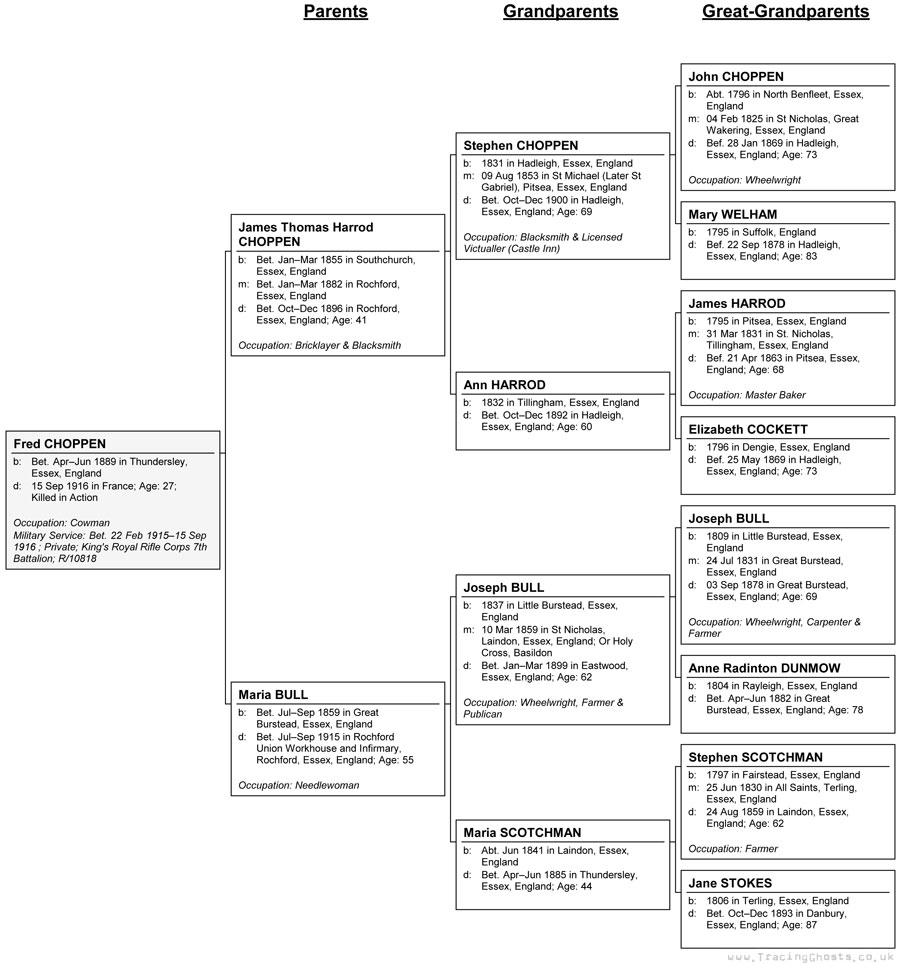 Fred was living with his uncle in Hadleigh before enlisting (and both parents were deceased when he died), so his place on Hadleigh War Memorial is easy to understand.