The St James The Less church WWI plaque lists J H Coolledge as having died in 1914, and the memorial plaque names him as John H Coolledge.

John Henry COOLLEDGE was born on 25th July 1884 in Purleigh, Essex, and was the ninth of eleven children born to Job COOLLEDGE and Sarah Ann OLIVER. His father was a Shoemaker and John’s both parents were born in Maldon, Essex.

Job and Sarah already had two children by the time they married in late 1870 (Emily in 1866 and Caroline early 1870, both born in Maldon). Their third child, Sidney, was born around Nov 1871 but tragically died 5 months later (he was possibly baptised and buried on the same day) and their forth (Kate) born in 1873. Sidney was the only child to be baptised out of their first four children.

The family had moved to Purleigh by 1875 where their fifth child was born (Nelly), who was baptised the following year. Their sixth child (Clara) was born summer 1878 and baptised in the September, then on 25th Oct 1878 their eldest three daughters were finally baptised (aged 12, 8 and 5). Tragedy struck again in May 1879 when 10 month old Clara died. She was buried on 10th May and two days later Sarah gave birth to their seventh child, Flora. Their eighth child, Eliza, was born in spring 1882, followed by their ninth (John) in the summer of 1884. Their tenth child (Elizabeth) was born in 1887, and their final child, George, in 1889 (Sarah was now age 44). Of their last five children, Flora was 1 when she was baptised, and the rest were all just a few weeks old.

In 1901, Job was boarding in Prittlewell with his daughter Emily, whilst Sarah was still in Purleigh with their youngest two children. Meanwhile, John was living with his sister Kate (also in Prittlewell), who had married in 1893. He was age 16 (almost 17) and working as a General Labourer. Then in mid 1902 their mother Sarah died aged 56 and very shortly after this, in the September, John enlisted into the Royal Navy as a Stoker (now aged 18). It is interesting to note his service record incorrectly states his birth as 25 Jul 1883 in Purley, Surrey. His previous occupation was listed as Cab Driver, and was described as 5′ 7″ with brown hair, hazel eyes and a ruddy complexion. He also had a birthmark on the left side of his face. 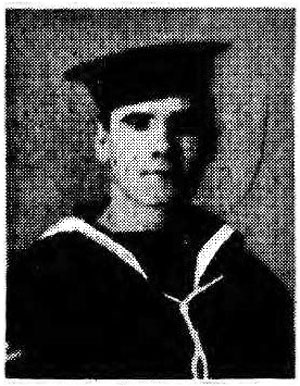 John served on many different ships up to 1911 when he married Harriet Alice CAREY (John’s father Job was still living in Purleigh, age 64). They married on 29th Jul 1911 in Leigh-On-Sea (where Harriet was born and whose father was a Fisherman). John was 26 (just 4 days shy of his 27th birthday) and Harriet was 27. John had shore purchase between 7 Dec 1911 and 23 Feb 1912, then joined RFR Chatham B on the 24th to serve aboard HMS Cressy. Their first and only child John Henry Wallace COOLLEDGE was born on 5 Jul 1912. John was still serving aboard HMS Cressy as a Lead Stoker when war broke out on 28 Jul 1914, and on 22 Sep 1914 his ship was was torpedoed and sunk by the German submarine U-9 whilst in the North Sea near Holland with the loss of 560 of her crew, including John. He was aged 30. His widow Harriet was stated to be living at 4 Reginald Cottages, High Street, Leigh On Sea. Not even a year after loosing her husband, their son John died aged just 3 in the summer of 1915. Three years later in 1918, Harriet gave birth to a daughter, Florence May COOLEDGE (when Florence married in 1940 she named her father as John Henry COOLLEDGE, which clearly he wasn’t as he’d been dead for nearly four years by the time she was born). Harriet herself remarried in 1922 to a Fishmonger named Frank (aka Francis) STONE, but had no children together (she was 38 by now and Frank was 33). John’s father Job died in 1926 aged 79. Harriet died in 1966 aged 82 and her second husband (Frank) in 1978 aged 89.

What of John’s brothers and sisters?

EMILY was working as a domestic servant by the time she was 15. Although Job states to be her father on her baptism and census records, because she was born four years before her parents married she went by the surname OLIVER rather than COOLLEDGE on official documents. Unmarried, she had her first child in 1888, a William John OLIVER born in Maldon. In 1891 aged 26, Emily and her son were living in Prittlewell, where she was working as a Housekeeper for the 49 year old widower William SMITH (a brickfield labourer) and four of his eleven children. One of his older sons, George, had just married Emily’s sister Kate. Skip forwards another ten years, and the 1901 census shows Emily was still working as a housekeeper for William SMITH and she’d had another child (listed as Florence OLIVER). Her father Job was also boarding with her. Looking up Emily’s children in the birth register reveals that Florence was actually named Florence Oliver SMITH, clearly pointing to William being her father. There were also another two children born to Emily and William in 1895, twins named Alfred Oliver SMITH and Emily Oliver SMITH. Alfred died the same quarter he was born, and baby Emily died during the beginning of 1896. In 1911, William and Emily state to have been married for twenty years (since 1881), but they obviously hadn’t been (nor were they ever married). Their daughter Florence was now listed with the surname “Smith”, and Emily’s first son was also living with them as a lodger. It is also stated that Emily had given birth to five children, and two were still living. Emily certainly had four children and two died, so suggests she must have had another child at some point who died (but I haven’t discovered any record of such). I don’t know when Emily died.

CAROLINE married at age 20 to George SMITH in Prittlewell on 16 Aug 1890. George was William SMITH’s son (from above) via his first wife. George worked at the brickfields like his father. Their first child was born either just before or just after they married (both marriage and birth of child were registered in the same quarter of 1890). Their second child was born in 1893 and their third and last in 1904. In 1907 the family emigrated to Winnipeg, Manitoba, Canada where George found work as a caretaker and night janitor. Caroline died there 15 May 1929 aged 59 and George died there many years later on 29 Dec 1951 aged 82.

KATE was living with her newly wed sister Caroline in 1891, aged 17 and working as a domestic servant. Two years later, on 15 Nov 1893, she married Frank John BRAND, who worked for the Gas Works. They had six children between 1895-1905 (two boys and four girls). In 1901, the family were living next door to Kate’s sister Caroline and her family in Prittlewell, but had moved to Southchurch by 1911. Their eldest son Albert enlisted into the Royal Army Medical Corps in 1912 and served for eight years until 1920, and their other son Alfred enlisted into the Royal Navy in 1915 age 17 (he said he was 18). Alfred served for twelve years until 1923 when he contracted TB and was discharged. He then died in 1926 aged 28. Kate and Frank were living in Southend by 1939. Kate died in 1953 aged 79, and Frank died in 1958 aged 86. Mar

NELLY married cab driver Amos Harry OSBORNE (uncle of Thomas Henry FARLEY, who is also commemorated on the Hadleigh War Memorial) on 18 Mar 1899, and already had a two year old with a second one on the way. In 1901 they were living in Prittlewell (4 Coleman Street) and by 1920 had a total of eleven children (just like her own parents). They continued to live at 4 Coleman Street until their deaths in 1946 (Amos, aged 71) and 1948 (Nelly, age 72).

ELIZA was working as a general domestic servant in 1901 (age 19, but recorded as 21), in Leyton, Essex. After this point Eliza disappears from records, so I don’t know what happened to her.

ELIZABETH (who also went by her middle name of Jessie) married Robert PEACOCK on 5 Nov 1910 in Prittlewell. Robert was 11 years older than Elizabeth and a career soldier. He enlisted into the Royal Artillery in 1894 as a Private, being promoted to Staff Sergeant in 1915. He was discharged in 1920 after 26 years service. Their first child was born in 1912 but sadly died at a few months old. They had twins in 1916 and their forth and final child in 1918. In 1931, Elizabeth died aged 44 (leaving children age 13 and twins at 15). Robert never remarried, and died in 1962 aged 86.

GEORGE enlisted into the Royal Field Artillery as a gunner c.1910, and in 1911 was stationed at Louisberg Barracks at Bordon Camp in Hampshire age 21 (not 25 as stated). In 1912 (in Kent) he married Nellie Maisie WINGHAM, the daughter of George Collins WINGHAM, a groundsman and professional cricketer at Shorncliffe Camp, Kent (where Nellie was born). They then moved to Southend-On-Sea where their three children were born, in 1913, 1914 and 1916. On 19 Sep 1918, George died of wounds sustained in Démuin after being taken to a casualty clearing station. He was age 28. Nellie continued to live in Southend and had her forth child a year after George died in late 1919 and a fifth in 1921 (fathers unknown). In 1923, Nellie emigrated to Quebec, Canada and in 1925 married George William Cunningham CARPHIN but divorced in 1948. Nellie died in Quebec, Canada in 1952 aged 63. 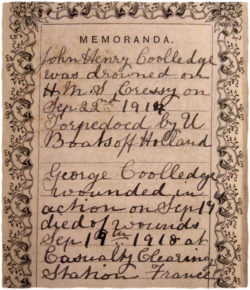 John’s father Job COOLLEDGE was the last of twelve children born 1847 in Maldon, Essex to parents John COOLLEDGE and Caroline HIPSEY. John was a corn and coal porter, and married Caroline in Maldon on 24 Mar 1824. Job’s mother died in 1862 when he was 15 (Caroline was 58). John remarried swiftly the following year in 1863 to Catherine BANNISTER. They had just over eleven years together before Catherine died in 1875 aged 67. John died three years later in 1878 aged 74.

John’s mother Sarah Ann OLIVER was born in 1846 in Maldon, Essex to a 19 year old unmarried Susan OLIVER (father unknown). Susan married Ephraim CARPENTER four years later in 1850 and had a further four children between 1854-1865. Ephraim was an agricultural labourer, and sadly died in 1866 aged 47 leaving Susan with four young children to raise on her own (aged 1, 6, 9 and 12 – Sarah was now 20). In 1881 Susan was living in Prittlewell as married with Charles TYLER (a Brick Maker & General Labourer), but they didn’t actually get married until the following year on 15 Oct 1882. Charles died in 1896 aged 65. I haven’t been able to confirm what happened to Susan but she too may have died in 1896. 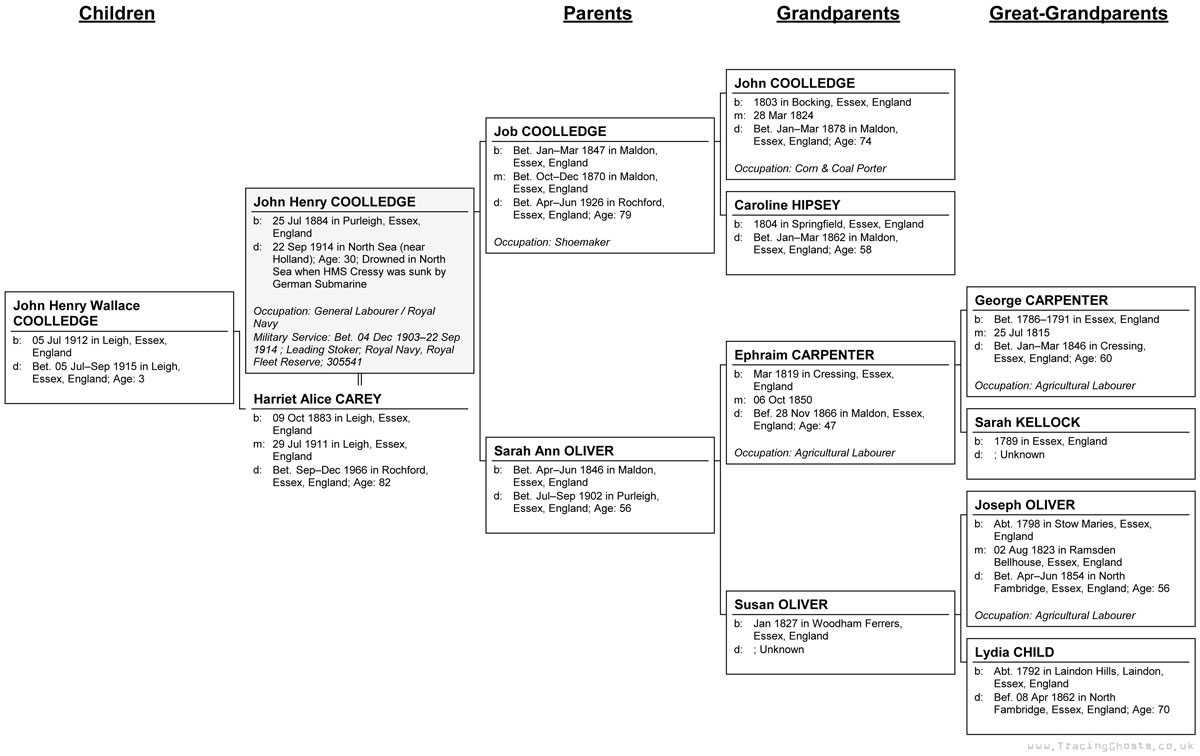 I haven’t discovered John’s link to Hadleigh, a place he himself never lived. John is also on the Purleigh memorial, where he was born, but why the Hadleigh rather than Leigh memorial where he and his wife lived?